We now know that AMD is probably also developing a chip called ‘Navi 22’ in addition to the large Navi 21 GPU that is in the RX 6800 and RX 6900 series. This chip must be comparable in core numbers to Navi 10, the GPU in the RX 5700 series. A software developer who has popped up more often now says he has discovered more information about Navi 22.

According to information that will probably be found in drivers, it must have 2560 cores. That is the same as the RX 5700 XT, but the new GPU is based on the RDNA 2 architecture. It will therefore perform a lot better, because RDNA 2 has a significant ipc improvement and also makes higher clock speeds possible. Higher yields on TSMC’s 7nm node (which will now be more mature) will also help. 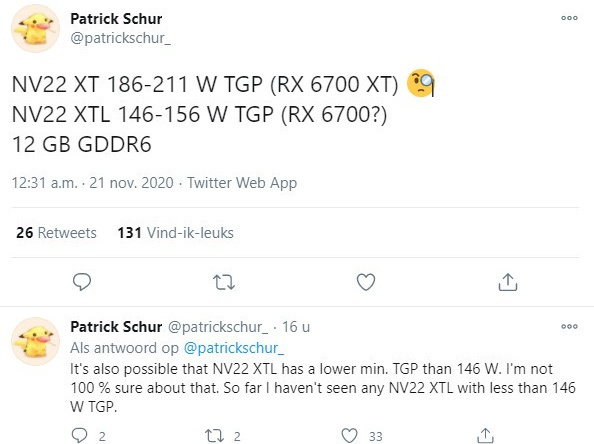 Schur says the chip would have 12 GB gddr6, this would apply to both the XT variant (presumably the RX 6700 XT) and the XTL version (RX 6700). however, according to previously emerged information, the RX 6700 will have a narrower 192-bit memory bus. There would be cards with a tgp from 186 to 211 watts can be found for the RX 6700 XT. The RX 6700 sku is said to offer variants from 146 watts to 156 watts. Presumably here with tgp total graphics power and thus the consumption of the card as a whole, although the abbreviation is regularly used for other definitions. The RX 5700 XT has a total board power (tbp, including the consumption of the video card as a whole) of 225 watts. The reference model of the RX 5700 non-XT has a tbp of 180 watts. Custom cards can of course go over this.

Presumably, AMD is looking for the optimal ratio between consumption and performance with these tdps, including the lower quality GPUs. So a lot can still change. It was previously rumored that the card will be unveiled in January.

Disney + Brasil: the 10 best series to watch on streaming

Young Rock: new series by the star The Rock gets first images

Google Chrome: how to activate and use search in tabs

Disney + Brasil: the 10 best series to watch on streaming

External Affairs Minister Dr. S. Jaishankar stressed on diversity and strengthening of the supply chain after the Kovid epidemic in the world – Taja Khabar

Werewolf Among Us: the Chinese clone of Among Us breaks the charts in Asia

Among Us creators announced a new map