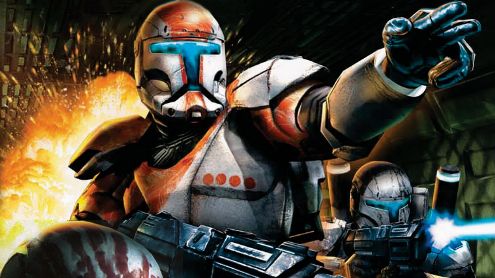 Lucasfilm Games hasn’t been idle lately. The label of the Canvas war even fixes what some gamers as an injustice a long time ago in the distant Sony galaxy.

Star Wars: Republic Commando will be available on PS4 and PS5 on April 6. Why shouldn’t we be joking with this ad? Quite simply because it will be the first time that this FPS will be playable on a PlayStation console. Its release, in 2005, had only taken place on PC and Xbox.

“Between tradition and modernity”

Aspyr Media is responsible for bringing this “classic” to Sony machines. And the studio says more about the PlayStation Blog :

In Star Wars Republic Commando, you can count on your trusty blaster rifle and your clone troopers elite unit. The game brings a tactical dimension to the first-person shooter genre, with squad controls.

You will play as the leader of the Delta Squad, known under the names RC-1138, Delta Trois-Huit or even Boss. But the clones are never alone. Your squad is a real weapon, especially when you are leading operations. Of course, your soldiers can stay in formation and pursue tactics on their own, but the way you lead your squad will be the key to victory.

Among these maneuvers, you can ask them to perform special tasks, such as destroying elements of the environment, opening breaches in doors, locating and killing targets, or even assemble behind you. Your squad can even revive you if you fall on the field of honor!

You may never have played Star Wars Republic Commando, but you have undoubtedly seen the Delta Squad in the Star Wars: The Clone Wars TV series, especially in the episode The Wizards of the Mist. By the way, this was the first appearance of a clone commando unit in this series!

Of course, this is not the only connection between the Delta Squad and the Star Wars universe at large. Boba Fett, Jango Fett and the fearless leader of the Delta Squad, Delta Trois-Eight, have all been voiced by Temuera Morrison, who has just returned to season 2 of The Mandalorian as Boba Fett.

Here at Aspyr, we respect the classics. We had the heart to faithfully recreate Star Wars Republic Commando while giving it a little touch of modernity.

What worked in 2005 is not necessarily adapted to the current equipment. That’s why we’ve updated the controls to match the DualShock 4 and DualSense wireless controllers.

Obviously, no portage of Aspyr would be complete without some new trophies to drop. By advancing in the game, you will win trophies for completing campaigns, but also for repelling drodes. My favorite trophy is called Squeaky Clean: you get it by keeping your tactical sight spotless.

Mining plates are weak and expensive, but they are a success – Aroged

Waze: that's it, Google Assistant in French is finally available

Twitch and YouTube: Gamers spend a lot of money on donations

Winter sales 2021: The best Gaming, Hardware and High-Tech offers not to be missed this Monday, March 1st