I don’t even remember exactly what happened, but last year, during the months of forced lockdown due to the pandemic, a friend passed me a link via Instagram. I discover that a studio of Malaysian designers has created crazy reinterpretations of Pokémon over the years. In those artworks, the colorful little creatures imagined by Satoshi Tajiri are transformed from pocket monsters to highly armored super badass war robots. And the beauty is that in reality the matter does not end there.

Because those designers didn’t just design them, their mechanized Pokémon. On the contrary, the boys of Frame Wars their creations have always wanted to make them become real objects, starting with an exquisite model of Venusaur immersed in a strange sci-fi landscape. So I, who am not a big fan of the series but who have always had a soft spot for Bulbasaur since the days of Pokémon Red, what do I do, don’t order one of those models? With a not indifferent leap in the dark, I decided to throw myself: the fear of regretting it went beyond that of taking a colossal rip-off.

A little less than a year later, here we are: Mecha Venusaur has arrived at its destination proving astounding beyond my wildest expectations. It now makes a fine show of itself (and its 30cm for about 8kg) on ​​my library, majestic and very proud. In this regard, we reached Frame Wars to find out more, trying to find out all the backstories of talented designers that you can also support through the Patreon of Frame Wars.

Everyeye.it: First, tell me something about yourself. Who are you, how many people are behind the Frame Wars project, when it all started …

Frame Wars: Frame Wars is one design studio that reimagines the characters of our childhood transforming them into designs that are devastating, frightening and capable of having a huge impact when they appear on the battlefield. 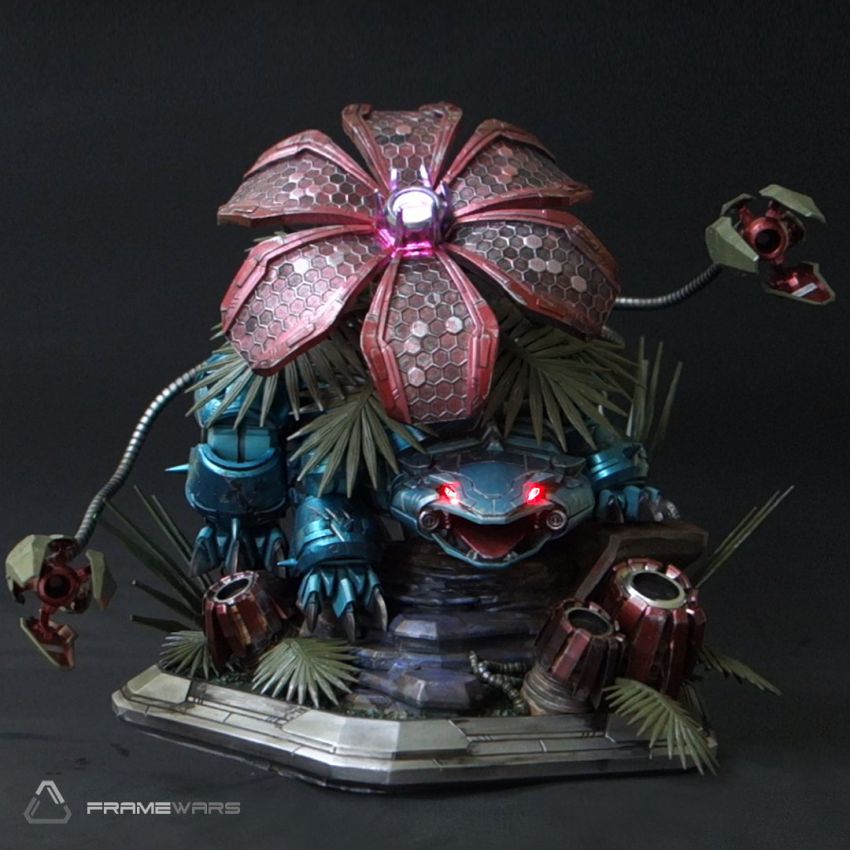 You know, that EPIC moment where you see something really cool making its appearance … we want to give that kind of interpretation to the heroes of our childhood. We are a small team of six with the same kind of perspective, working towards the same goal.

Everyeye.it: I admit I’m biased because Bulbasaur is by far my favorite starter, but the question is simple: why did you choose Venusaur as your first subject? What made you opt for him instead of the more iconic Pikachu or perhaps Charizard, an option that is probably far more popular in terms of the public?

Frame Wars: Oh, the answer is simple: Bulbasaur is number 001 in the Pokédex.

Everyeye.it: How many statues have you produced? Have they all been sold? How long did it take you to produce? How long did they go sold out, assuming it happened?

Frame Wars: They have been produced just 300 units. They are out of stock, apart from a few pending units because the buyers are gone and we can’t get in touch with them. It took us about two years due to problems with the painting of the original prototype, the temporary closure of the company that took care of the production in China and the shipping difficulties always due to COVID. We sold out all the units already starting from the pre-orders, based simply on the renderings: in retrospect we are really lucky to have had the financial support of the fans from the very first steps of the project. 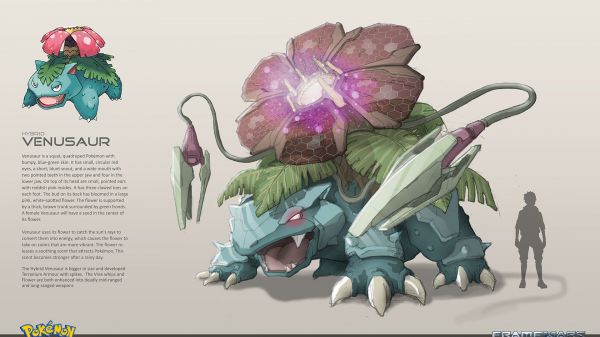 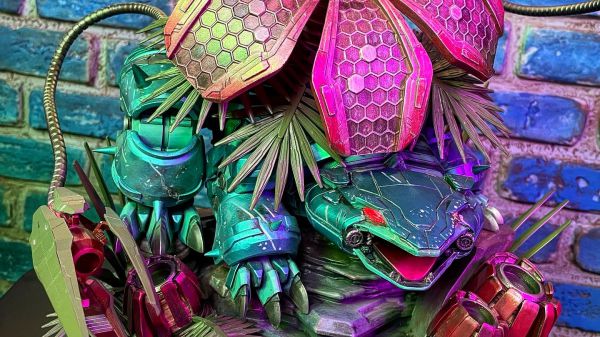 Everyeye.it: Mecha Venusaur has been sold all over the world, but is there a particular market where your concept has had a greater impact? I would like to understand if your idea has had a global resonance, or if perhaps it has been better received for example in the USA or maybe in Japan.
Frame Wars: Most of the fans come from China, followed by the USA, England and then the rest of Europe. We have also had purchases from Australia and New Zealand.

Everyeye.it: What are your plans for the future? Will you create other statues? If so, which ones and when?

Frame Wars: The intention is absolutely that of complete at least the three starters – Venusaur, Blastoise and Charizard. The Mecha Blastoise prototype is in development right now. If all goes well, after the three starters we would like to continue with Snorlax, Gyarados and then … the Pokédex list goes on and on!

Everyeye.it: Have you ever thought about doing something less exorbitant? I try to explain myself: Mecha Venusaur is stunning in its level of detail and super inspired construction, but it is also big, chunky and consequently not for all budgets ($ 350). Maybe a series of smaller action figures could have a wider audience?

Frame Wars: To tell the truth we are thinking about it, but it would be another matter entirely. For smaller and less expensive products we should use agents / intermediaries, also for the management of shipping costs. We’re still trying to make that kind of connections.

Everyeye.it: The matter is delicate, but as they say it is a bit like the proverbial elephant in the room and therefore it is a question to ask. Let’s talk about licensing: your phenomenal reinterpretation of Pokémon was created as a tribute by fans, but aren’t you afraid that The Pokémon Company could intervene with a copyright takedown notice and put an end to your business? 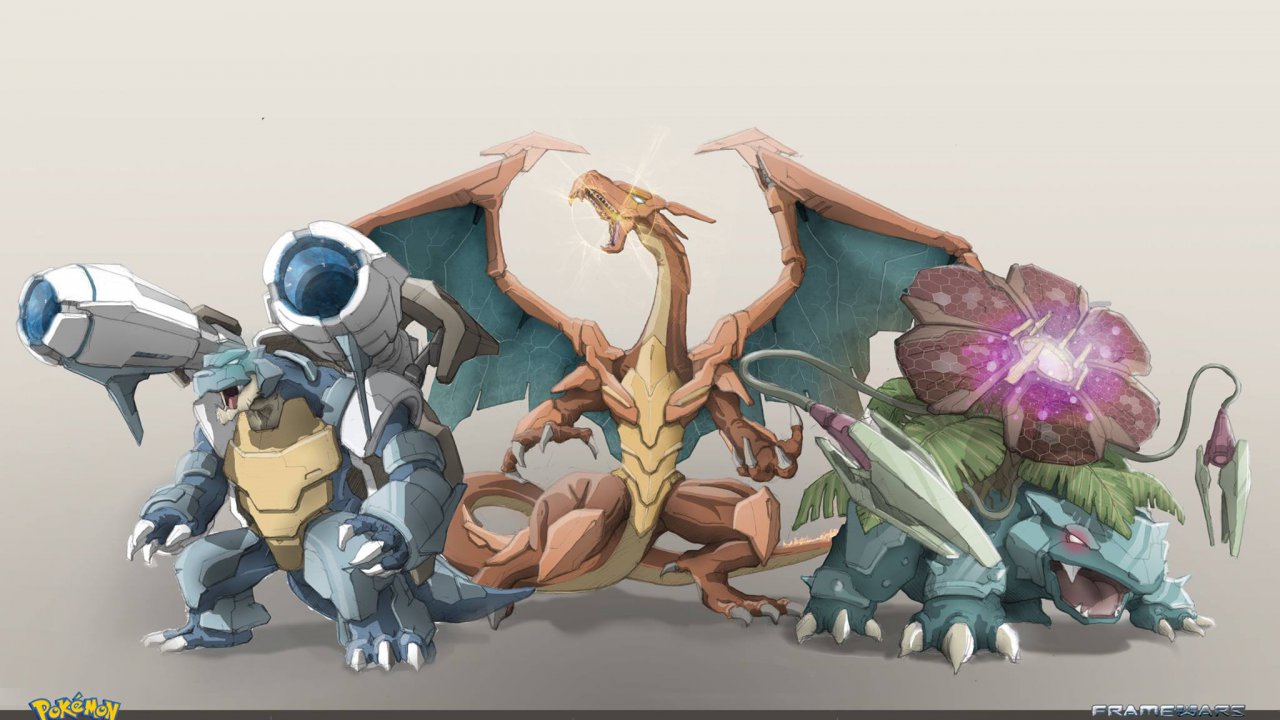 Have you ever thought about interfacing directly with them to try to make things official? Or to the limit of being a little more discreet, avoiding explicit terms like “Pokémon” or “Venusaur” …

Frame Wars: We would love to work with big companies like Nintendo to develop licensed products, but at the moment we don’t have the right connections or the right channel to reach them. We hope, however, that, once noticed, they can glimpse the potential in our works in order to establish a connection with them to open us to a future in which each Pokémon can have a similar evolution.

However, we want to underline that for us this is not a real business, but only a tribute / fan art designed to make a certain type of public appreciate these alternate versions of Pokémon. And in fact, for this very reason, we hardly gained anything from our first product. 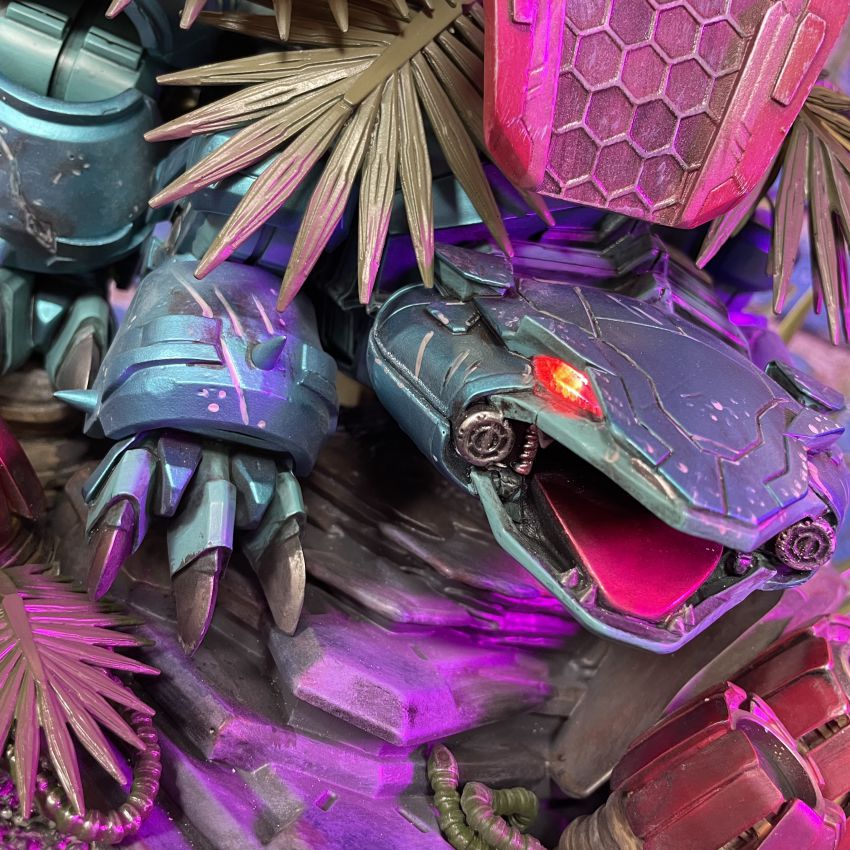 But since for us it is fan art and not a way to do business (of course, there is still money that is exchanged so technically it could be seen as a way to do business, we know) we thought that not to call it “Venusaur” would have been a questionable commercial move, a means to legally protect us … And that would not have been a thing for us to be a true Pokémon fan. We instead we prefer to stay and proudly call ourselves Pokémon fans.

Everyeye.it: If ever Nintendo or The Pokémon Company were to decide to put an end to your project (and we certainly hope it won’t!) How would you behave? Would you abandon the idea altogether, or maybe you would try to create something similar but completely new and original?

Frame Wars: We actually originally started with our ideas of mechanical monsters – we thought about turning some wild animals into mechanical beings – and then when Pokémon Go launched in 2016 we tried to reproduce Pokémon to get the public closer to our designs. As we later found out, people have been much more interested in mechanical Pokémon than they are in our creatures. Perhaps, if one day this whole adventure were to end, we could think about making our initial designs.

Everyeye.it: We’ve seen a lot of Frame Wars-style Pokémon concept art, and you’ve just launched a spectacular action figure. Have you ever thought about doing something different, like turning your cyber Pokémon into a CG web series, comic book, or any other format that could expand this fascinating alternate universe you have conceived?

Frame Wars: At some point we thought about it, yes. We imagined a graphic novel, less demanding in terms of investments than an animated web series. 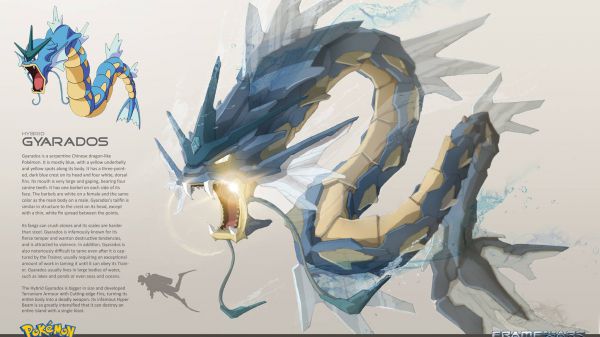 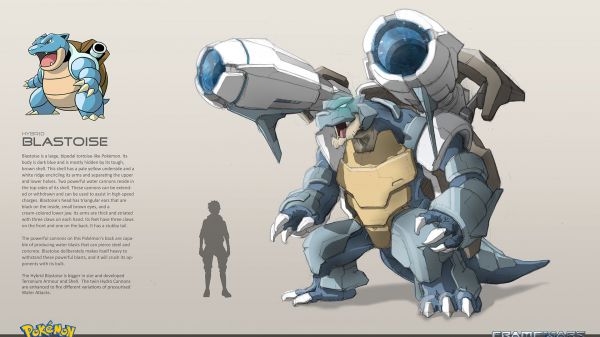 Maybe if one day we get licensed from Nintendo we can really try it. At the moment, whatever you do, there is always the risk of losing everything.

Everyeye.it: Is there another franchise you would like to work on, transforming it into something so different from the original to give it a new connotation? Even just wanting to dream, without let’s say actually having projects in place.

Frame Wars: During the launch of Star Wars – Rogue One, we came up with mechanized suits for each of the protagonists. We would love to do the same with Thundercats, Voltron, Naruto … the possibilities are endless. We would like to have the time and resources to do even more.

GTA Online: A Fan Found a Way to Reduce Uploads by 70%!

Yakuza 6 The Song of Life free with Xbox Game Pass: now available on console and PC

The hated Denuvo arrives on PS5: here’s what changes –