Molise, the small town of Sant’Agapito (Isernia) possibly hit by a meteorite – Aroged 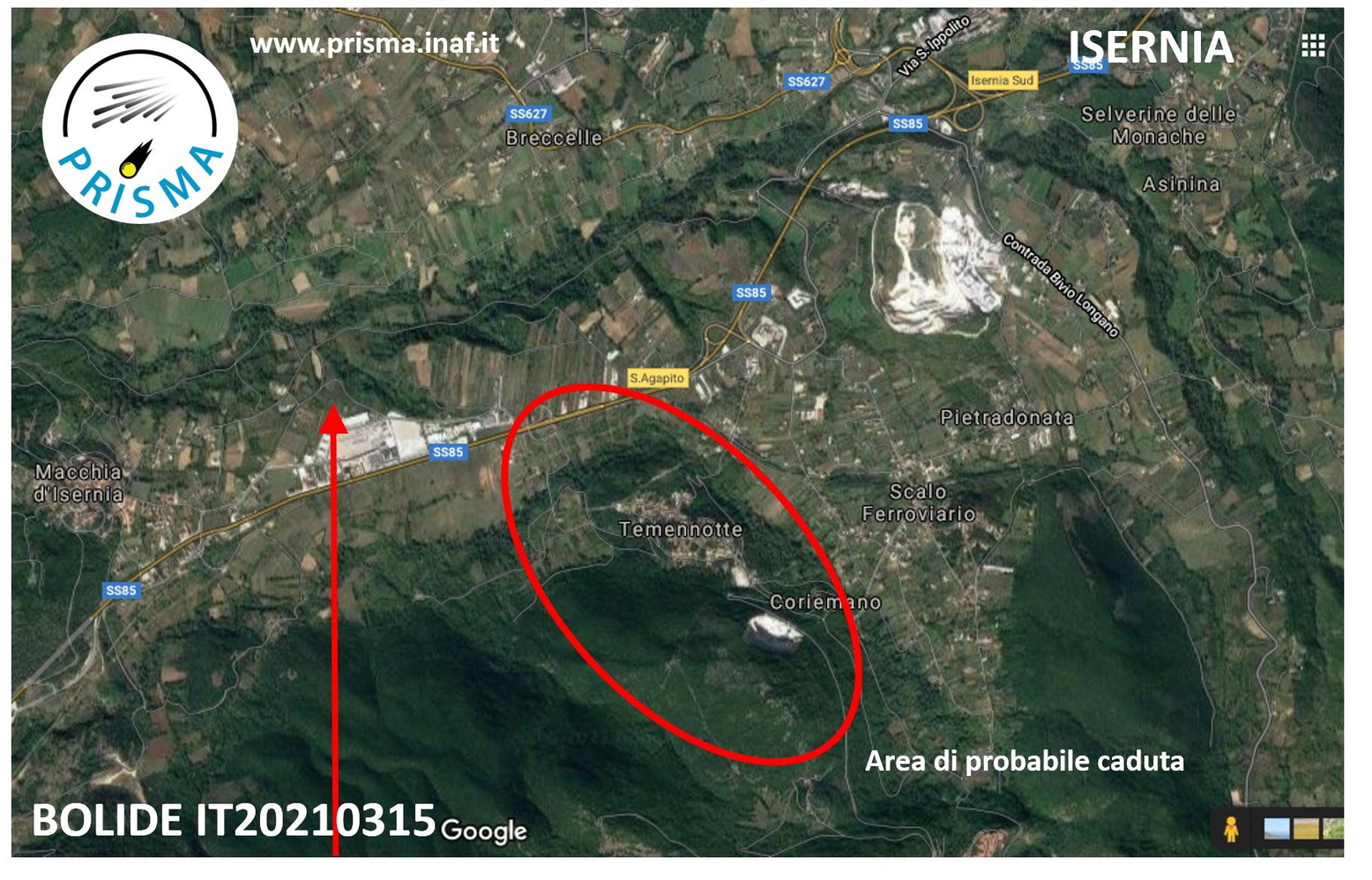 Prisma Network states that the data taken into consideration for the triangulation are those obtained from the Prisma chamber of Capua and from two other chambers, belonging to the IMTN network of Tortoreto and to the Caserta section of the Arma Aeronautica Association. “From the intersection of the data – we read on the website of the Prisma Network, First Network for the Systematic Surveillance of Meteors and Atmosphere – it appears that the small celestial body entered the atmosphere at an altitude of about 80 km and continued for a total length 61 km traveled in 5.3 seconds with an inclination of 84 °, an almost vertical trajectory. The final height and speed were respectively 19.8 km and only 2.8 km / s, values ​​that support for the arrival on the ground of a meteorite with an estimated mass of about 1 kg (a meteorite of about 8 cm if the density is 3.5 g / cm3) “. Any smaller fragments, “which could be between 2 and 4 cm in size, would have fallen a few kilometers further south in an inaccessible and wooded area, therefore very difficult to recover”.

How to behave when you find it – It is because of the limitations of the red zone that the citizens have not yet set out on the hunt for the fragment, as they themselves declared. Now, with the orange zone, the treasure hunt could begin. What is certain is that the researchers from the Prisma Network will arrive on Monday. In any case, recommends Rete Prisma, whoever finds a suspicious stone in the indicated area, “covered by a dark patina and with rounded corners”, should report it by sending a photo to [email protected]

Furthermore, before collecting the fragment, it is recommended to photograph the meteorite and to map the point; then, the website reads, “collect the meteorite using a sheet of paper, wrap it in a cotton cloth, place it in a clean glass jar, insert the jar in another airtight jar with ‘absorb moisture'”. The Prisma project involves researchers from the National Institute of Astrophysics (INAF) and from regional and local Universities, Astrophile Groups and Astronomical and Meteorological Observatories. The schools are involved with an educational program and with astronomy laboratories to involve students and individuals in research activities.

“I immediately notified the citizens – he says Giuseppe Di Pilla, mayor of Sant’Agapito, as reported The messenger – About 250 people live in Temennotte. They might run into the fireball. I explained how it could be done and what to do if found. From the coordinates that have been provided to me by the Prisma Network, the fall would have occurred towards the river and the area of ​​the junction for Sant’Agapito on Statale 85. Next week, together with the Prisma scientists, the research will begin. The regional CAI will participate. Perhaps we will involve other associations, but always paying attention to safety, we must not forget the measures for the containment of Covid. I’ll go too “.” For our territory – he concludes – it would be a godsend, even in terms of tourism. The town is five kilometers from Isernia, where there is a splendid Paleolithic museum, it would be extraordinary to be able to exhibit it “.

Biden officially announces the withdrawal of US troops from Afghanistan – Aroged

Blocking of layoffs, Maurizio Landini (CGIL Secretary): “Our proposal is to have a single date for everyone” – Video Aroged

Death of Philip, Buckingham Palace publishes a memory of Kate: the shot of the Queen and her wife with 7 great-grandchildren – Photo Aroged

Termini Imerese, it was not a heart attack: poisoned by his wife – Video

There are big news coming to Huawei’s wearable apps