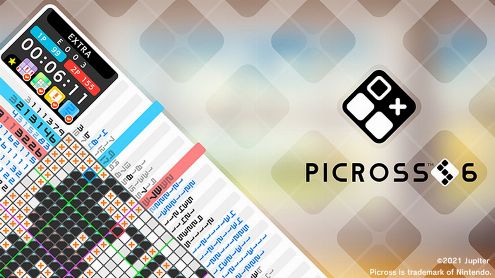 There are those for whom Picross is a religion. This is the case for at least two people in the editorial staff who no longer count the hours spent coloring boxes to discover pretty pixelated images. They now have the days that separate them from the next iteration of the games designed by Jupiter.

Picross S6 is set to arrive on Nintendo Switch on April 22. Its developers were in a playful mood this Wednesday, April 14, 2021. On Twitter, they offered a little Picross exercise to all the fans.

Follow the clues at the edge of this 10×10 grid and fill in the correct boxes, then very clearly an S6 appears. Before Jupiter returns to charge, some time should have passed. But such a teasing made people want to explore the mandates of the Internet, and in particular the site of the Japanese studio.

Result, thanks ResetEra, we know that the page of Picross S6, since become white again, indicated the release date and presented some images. And that no additional game mode appears on the program. But hey, as usual, we will eat our Picross, Color Picross, Mega Picross and Clip Picross without complaining. Let’s just hope that the number will compensate for the lack of originality.

How long does it take to see a series on Netflix, Amazon Prime Video or HBO? This site says

The Difference Between All USB Types and Standards Explained - Aroged

Amazfit GTS: Xiaomi smartwatch on sale for a limited time!

OnePlus Nord SE does not have to do, at least for now. Meanwhile Nord N100 is updated