For the first time, players learned about Ghost of Tsushima in 2017 at Paris Game Week. Then everyone was impressed by the spectacular trailer, but no one would have thought that the large, but not so well-known American studio Sucker Punch Productions would be able to please players and critics so much, collecting awards and marks in the spirit of “910” in 2020.

Now, a year later, the developers have announced the director’s version of their main hit, which will also affect the representative of the latest generation of consoles, the PlayStation 5. 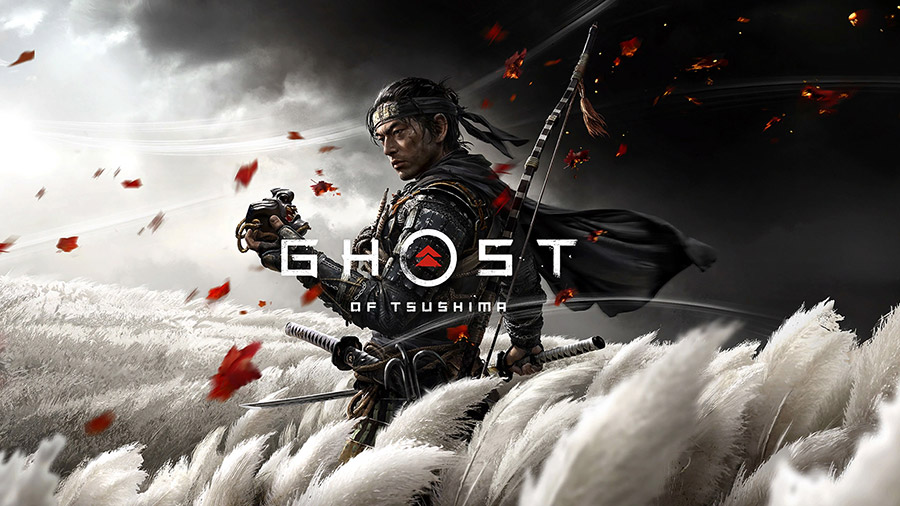 In fact, while Sucker Punch was widely recognized in the context of Ghost of Tsushima, the studio has been releasing solid titles for consoles since 1999. From Rocket: Robot on Wheels for the Nintendo 64 and the Sly Cooper series for PlayStation 2, to the Infamous line, which the developers have given almost a decade. In August 2011, following the success of Infamous 2, Sony acquired the studio, making it part of Worldwide Studios.

In 2014, Sucker Punch continued to develop Infamous on the PlayStation 4 and released Second Son and First Light in one year. Yet despite such a busy schedule, the studio was already carefully planning its next step in the industry. 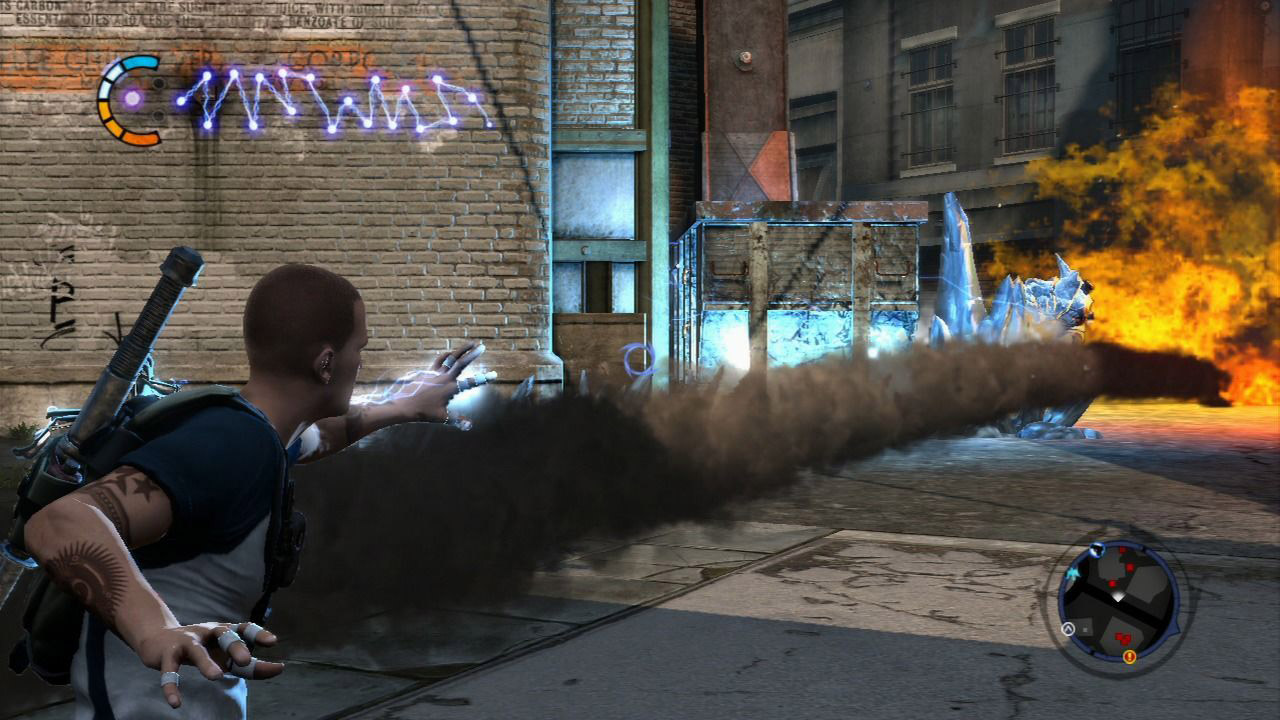 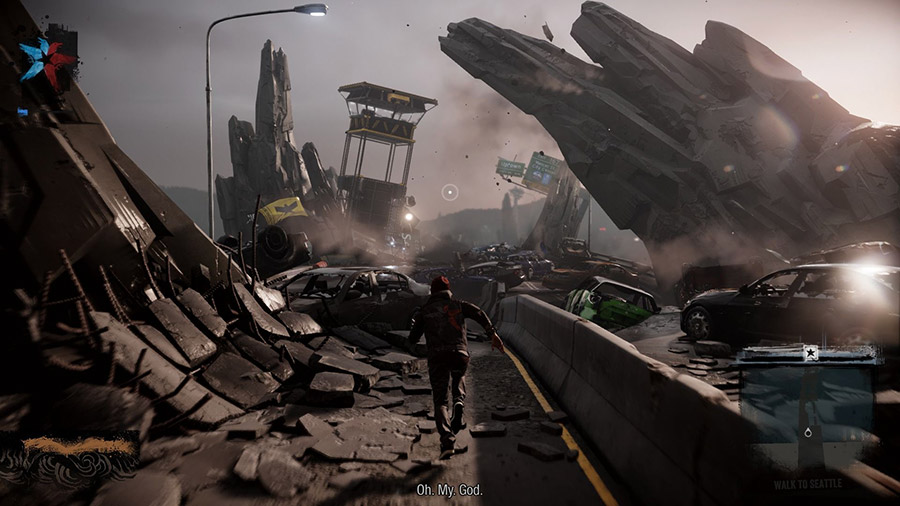 Thinking about what project they would like to do next, the developers realized that everyone will also work with the open world, realizing that this way they give the player more freedom.

Each Sucker Punch employee could offer his own idea, of which there were more than seventy in the end. Among them there was a place and Scottish folklore in the person of the robber Rob Roy, pirates, the Middle Ages in the aesthetics of steampunk, as well as “The Three Musketeers” by Alexander Dumas. They decided to stop at the samurai within the framework of feudal Japan. 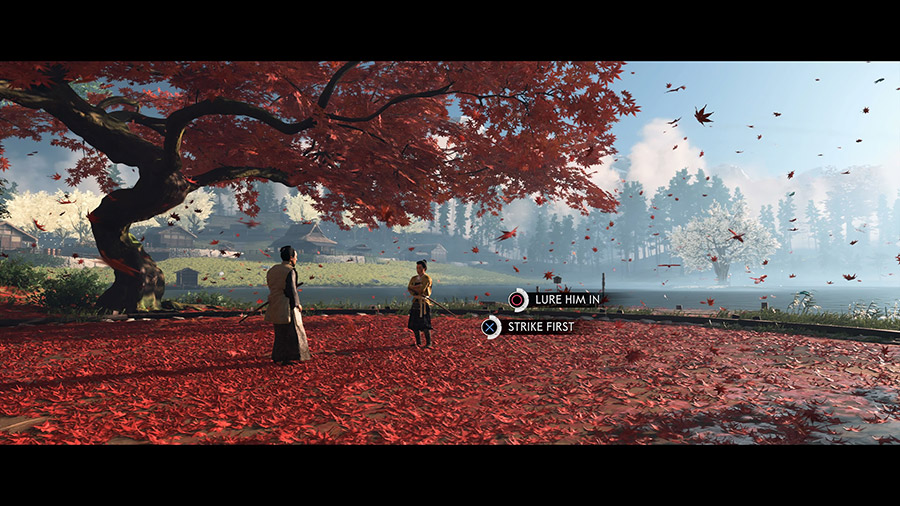 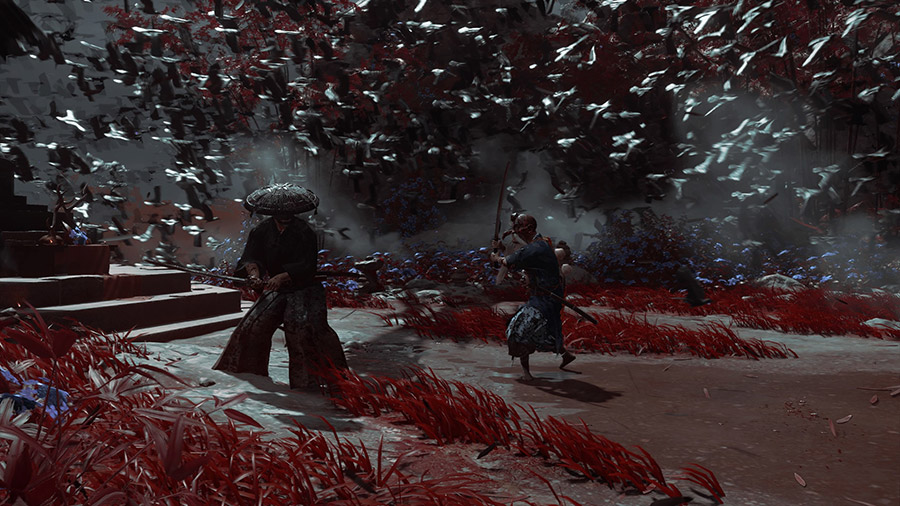 “We were looking for an incredible place that players would want to visit, and realized that there is nothing more romantic than feudal Japan. And who else to be in such a setting if not a samurai, ”recalled the director of the game Nate Fox.

“There is a lot of dignity and steadfastness in samurai that you don’t see in action heroes,” added Fox. – They are laconic, and if they threaten someone, they don’t make a show out of this. If the samurai act, it is always as effective as possible. “ 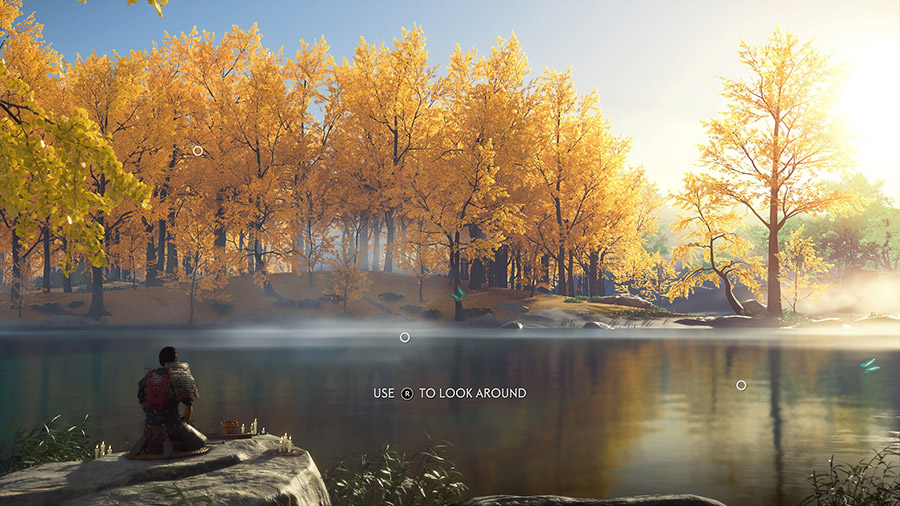 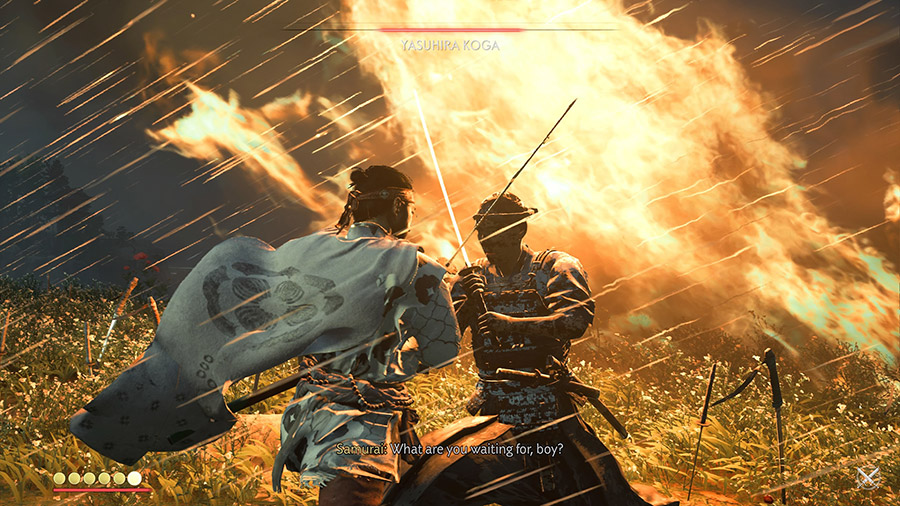 Perhaps the main source of inspiration for the developers was the films of the legendary Japanese director Akira Kurosawa, specifically “Seven Samurai” and “The Bodyguard”. It was Kurosawa who at one time introduced the Western public to the image of the samurai and Japanese culture.

Other influential works include Stan Sakai’s Lone Wolf and Cub and Usagi Yojimbo mangas, as well as video games like Shadow of Colossus, Red Dead Redemption 2, and Legend of Zelda: Breath of the Wild. 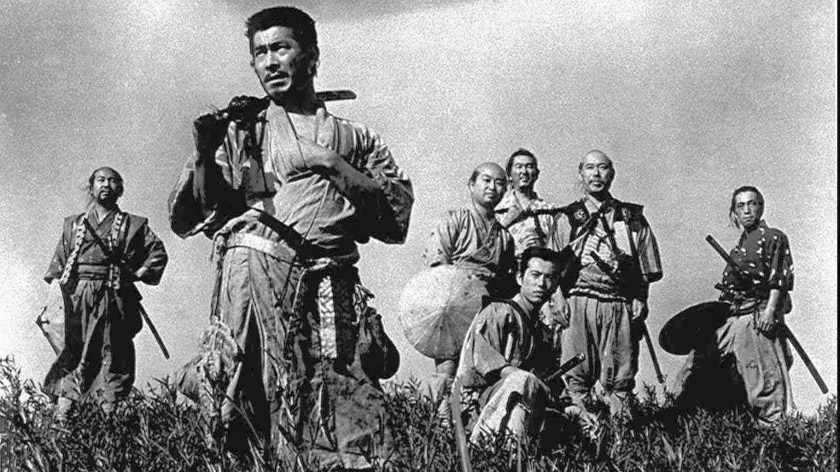 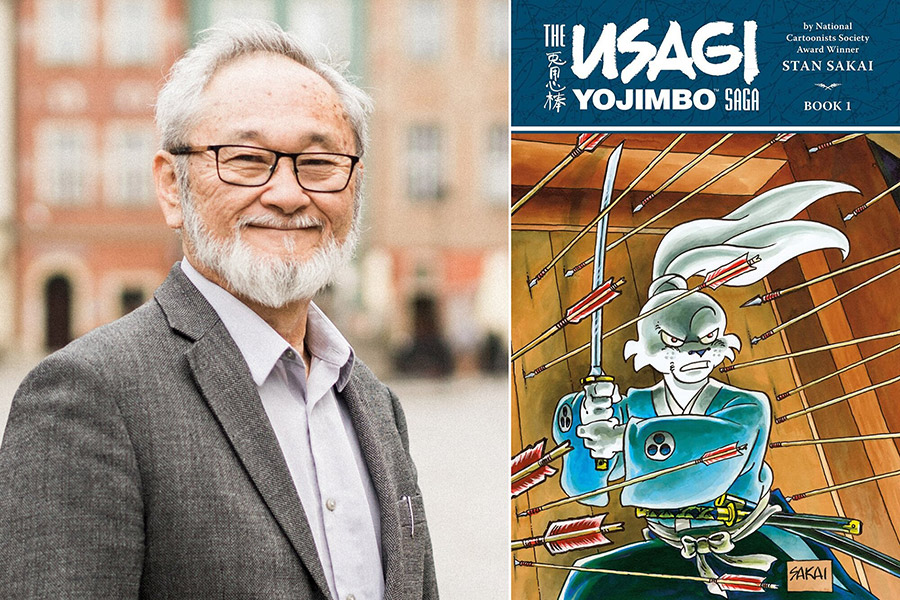 The Ghost of Tsushima map is based on the real island of Tsushima, located between South Korea and another Japanese island of Kyushu. To convey the authenticity of the landscape and culture as clearly as possible, the developers traveled to Tsushima twice, led by the project’s lead artist Joanna Wong.

During their stay on the island, the team consulted with artisans and historians, photographed and scanned the local flora, recorded birdsong and animal sounds.

“Tsushima’s exploration is at the center of the game’s entire gameplay, and we designed the setting as a single character with personality and charm who is constantly on the move,” said Wong. “When we first started, the nature of Tsushima was just a working background, but in the process we realized its full significance.” 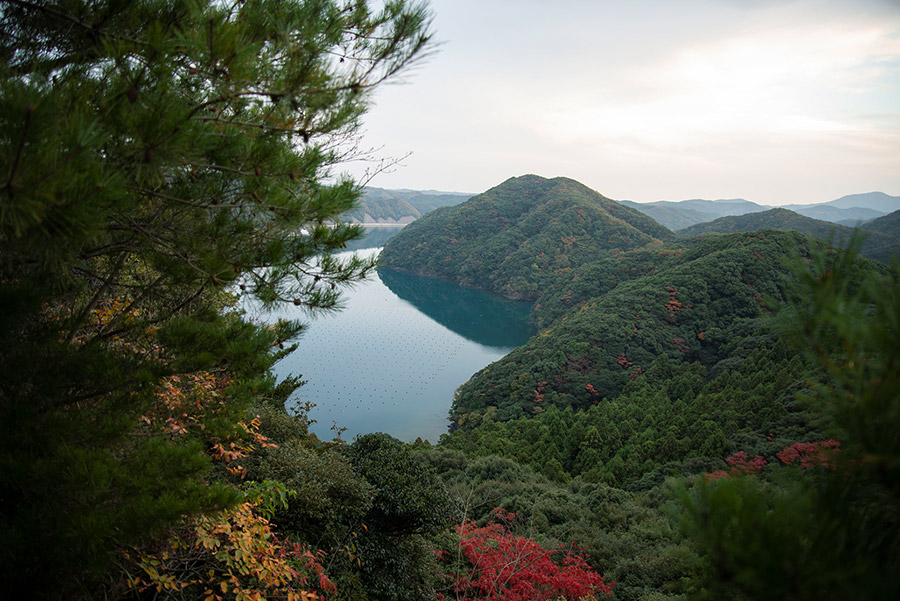 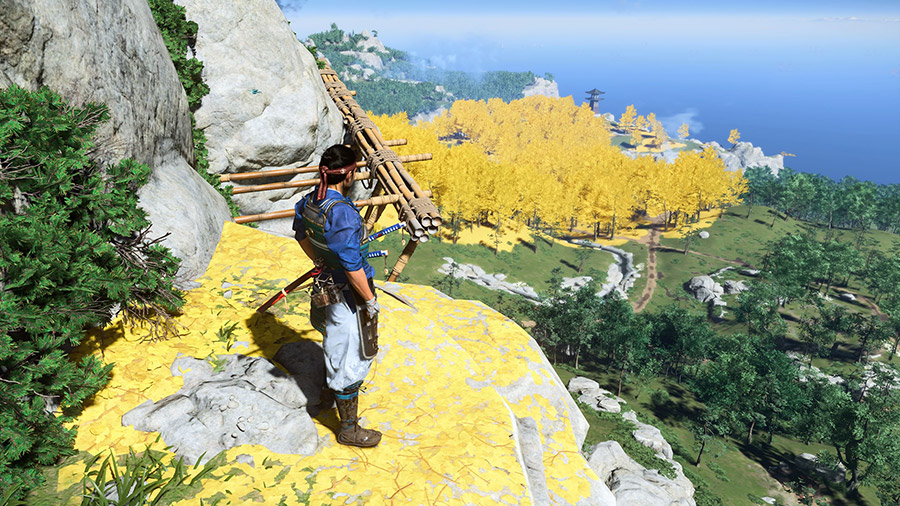 By the time development began, Ghost of Tsushima Sucker Punch had grown to about 150 people, but still, according to one of the founders of the company, Brian Fleming, developing such a large-scale world was not easy.

Although Infamous also sent the player into an open setting, it was smaller in scale, so the first couple of years of development was spent building a new technical foundation. Despite this, Sucker Punch still could not aim at copying the real island of Tsushima due to its enormous size. Rather than creating separate assets and placing them on the map, the studio has focused on developing several tools aimed at procedural generation.

They ended up with a map measuring about 28 square kilometers, including three regions, in which there was a place for forty different biomes. 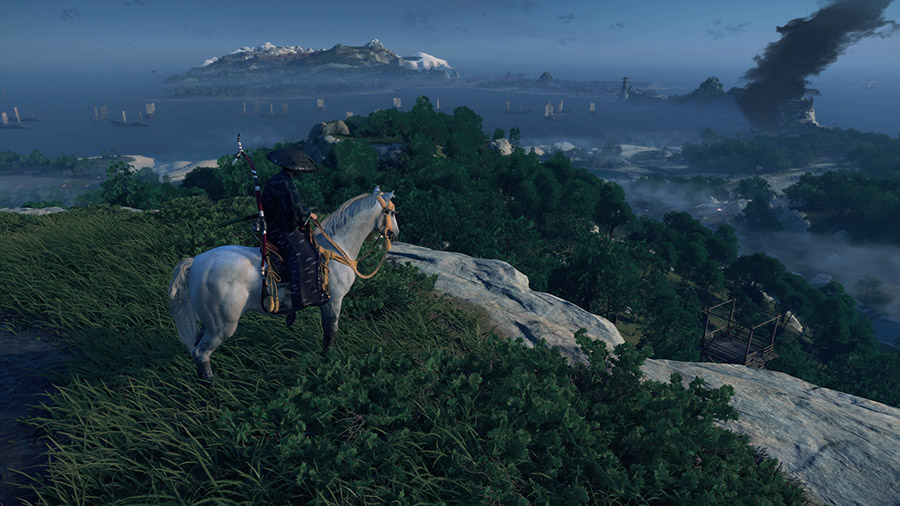 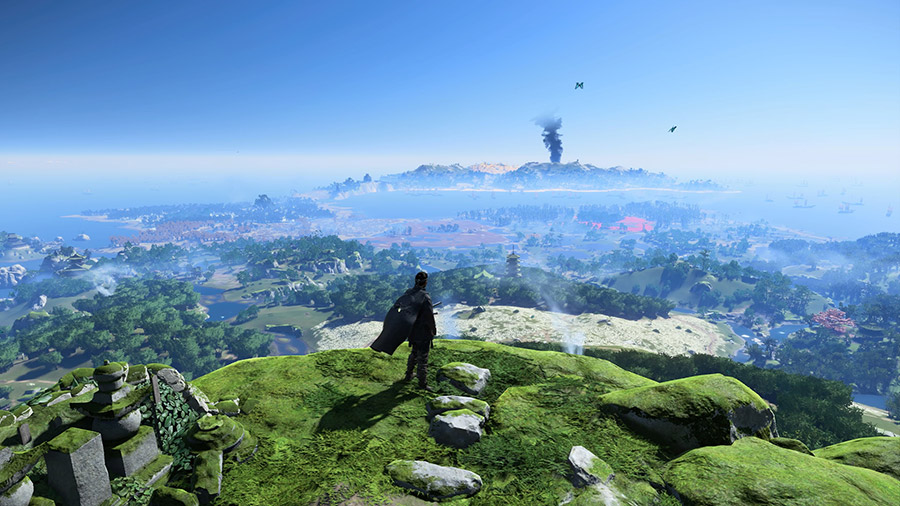 According to the plot of the title, during the capture of Tsushima in 1274, the army of the Mongol Empire under the leadership of Khotun Khan exterminated almost all samurai, without finishing off the truth of the main character of the game, Jin Sakai and his uncle.

When Hollywood or the gaming industry turned to Japan, it mainly depicted either the Sengoku period (circa 1573–1603) or the Edo period (1603–1868). Sucker Punch decided to work with the Kamakura period (1185-1333), for which not even a single film was shot. The main idea of ​​Ghost of Tsushima was as follows: “A samurai has to sacrifice his honor in order to become something else and save his homeland from invaders.”

Two actors were recruited to voice Sakai: Kazuya Nakai (Yakuza 0, Persona 3) was doing the Japanese version, and Daisuko Tsuji (Death Stranding, Call of Duty: Black Ops IV) the English one. The antagonist was voiced by Isobe Tsutomu (Nioh 2, Final Fantasy XV) and Patrick Gallagher, known for his role as Attila in the comedy Night at the Museum. 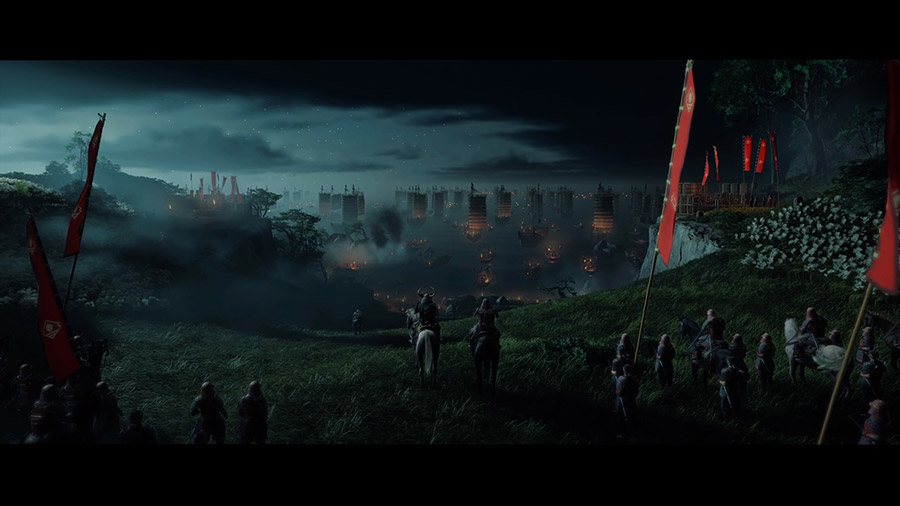 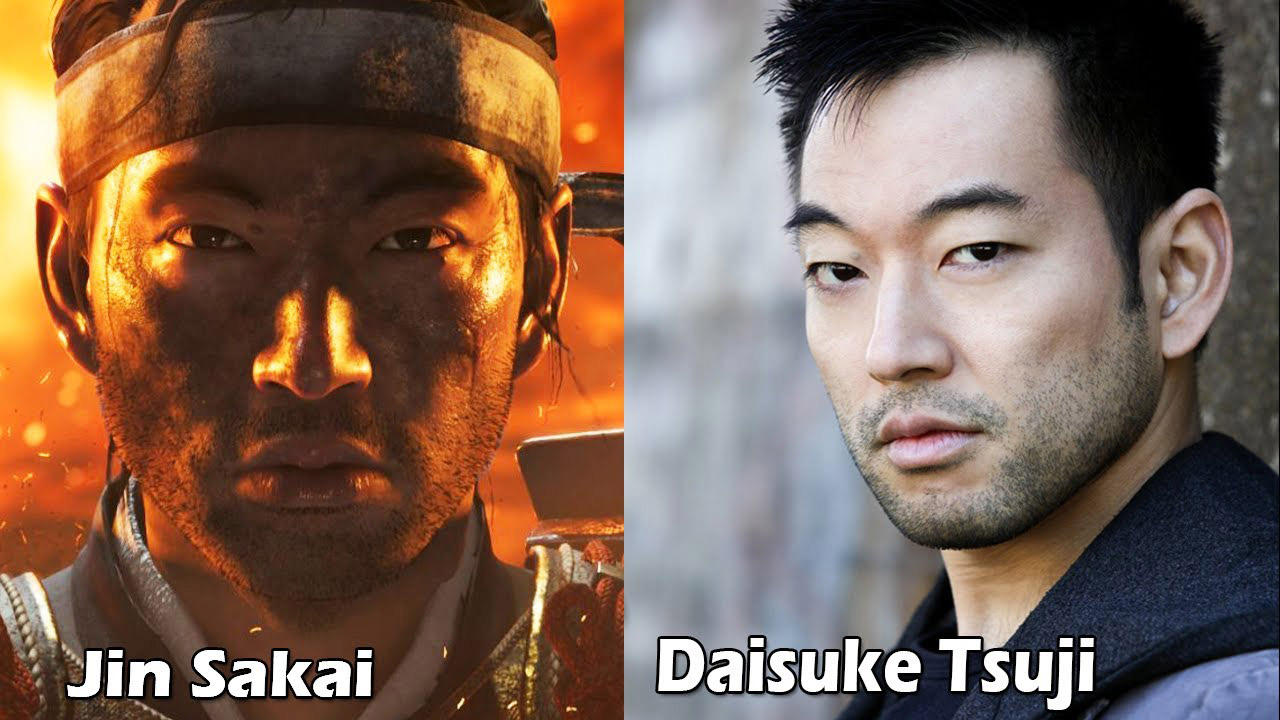 Perhaps the main advantage of the game was how reliably the developers showed Japan, trying to get rid of the usual Western interpretation of such scenarios as much as possible.

When the developers put together the basic prototype, Fox and Fleming first showed the idea to Shuhei Yoshida, one of the key people at PlayStation and president of SIE Worldwide Studios from 2008 to 2019, to make sure they were on the right track.

“We didn’t know if we would be able to implement our plans. We decided that if we couldn’t convince Yoshida, then we would switch to something else, ”Fleming recalls.

However, Yoshide, on the other hand, saw great potential in Ghost of Tsushima and advised developers to use whatever resources they can find to remove any uncertainty about the project. 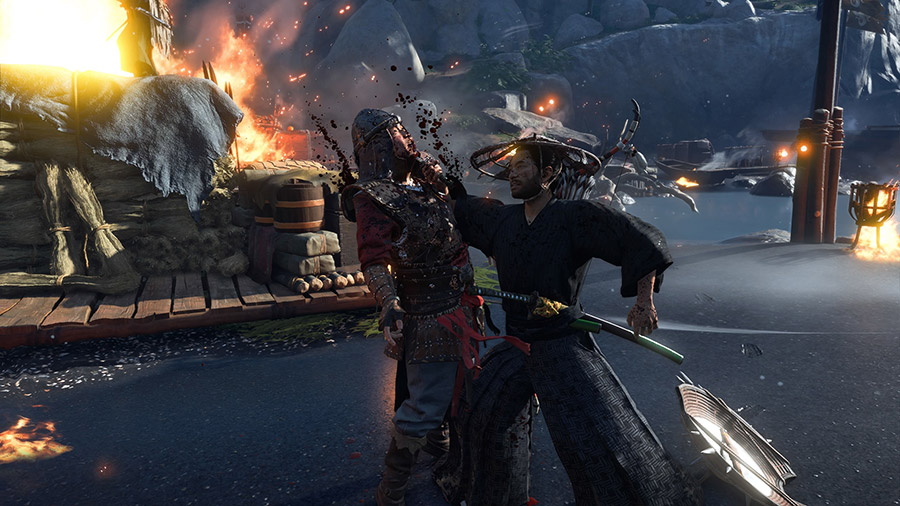 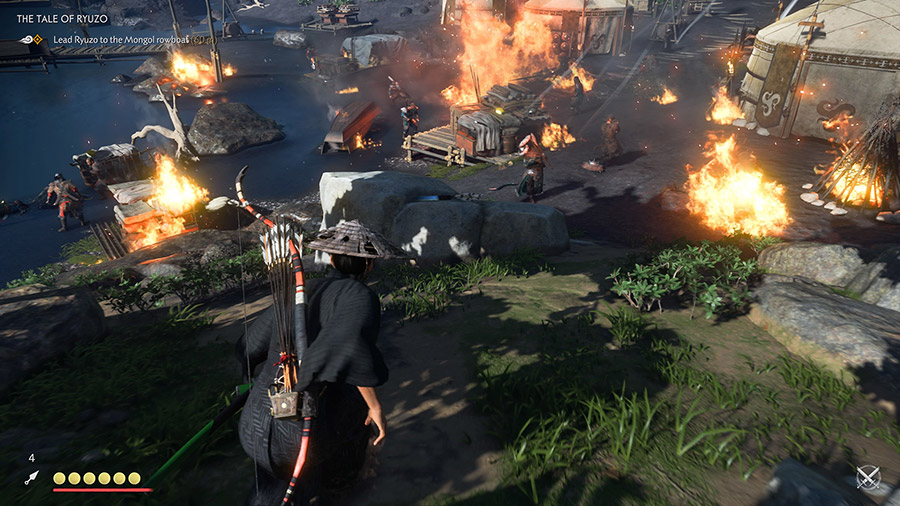 When asked what was most difficult in the development, Fleming without hesitation singles out the creation of a combat system. To implement the key mechanics of the game at the highest level, the studio invited two real samurai Masakumo Kuwami and Ryuzetsu Ida, who, under the direction of director Billy Harper, gave the heroes of the game movement through the motion capture system.

By the way, it is curious that in 1274 the samurai mainly used bows, not swords. Katana, on the other hand, became popular among them only four hundred years later. And when the warriors needed to use cold steel, their choice often fell on the tati’s two-handed sword. Also, the masks that cover only part of the face that Sakai wears did not appear until the Muromachi period between 1333 and 1573. 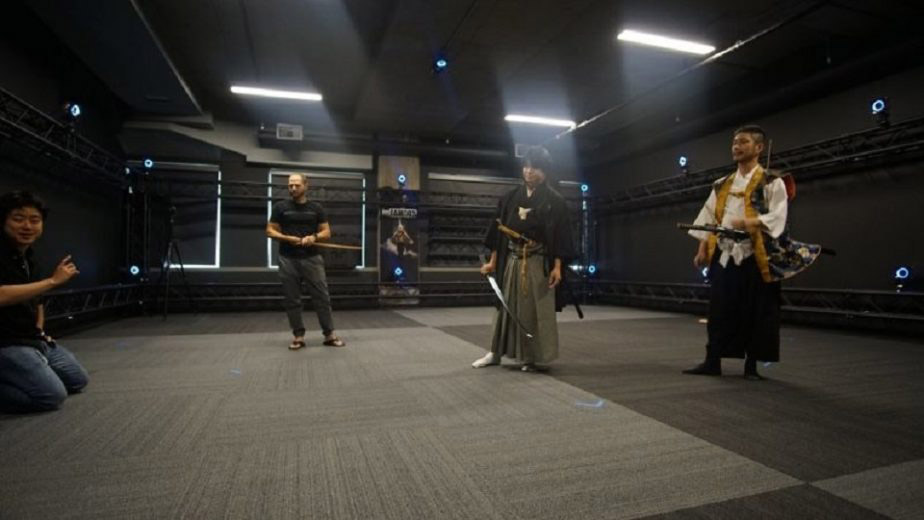 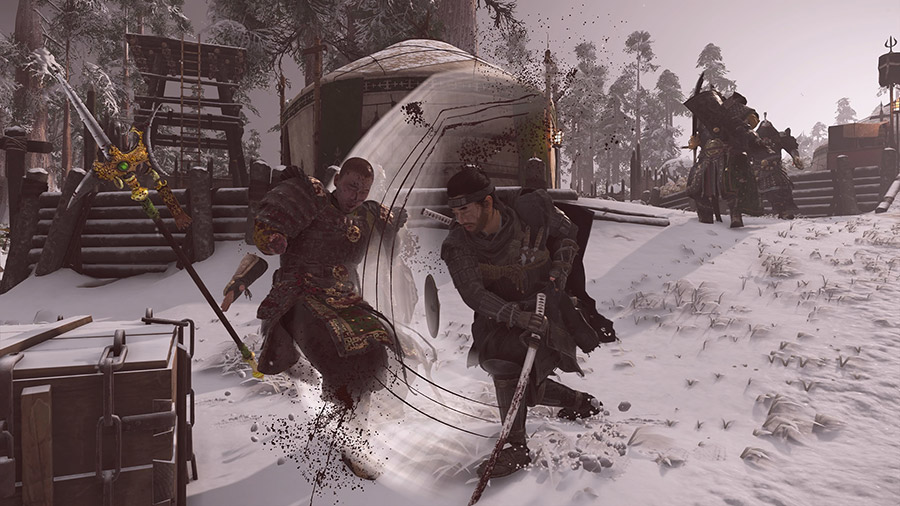 Composers Shigeru Umebayashi and Ilan Eshkeri were invited to write the soundtrack for Ghost of Tsushima. The first is known for his work in the framework of Japanese and Chinese cinema, and the second particularly distinguished himself with the music for the film “Young Victoria”. The musicians had only a year and a half to create a sound palette that personified both the island itself and the emotional experiences of the protagonist, tearing it into two parts during the game.

“When I composed the music for Ghost of Tsushima, I was inspired by the Japanese nature, its climate and lifestyle. In my compositions you can hear such Japanese instruments as shakuhachi, koto and taiko drums. Hopefully the players will feel the spirit of the people of Tsushima while listening to the soundtrack. The spirit of those who plow his land, and those who protect it, following the path of the samurai. “ 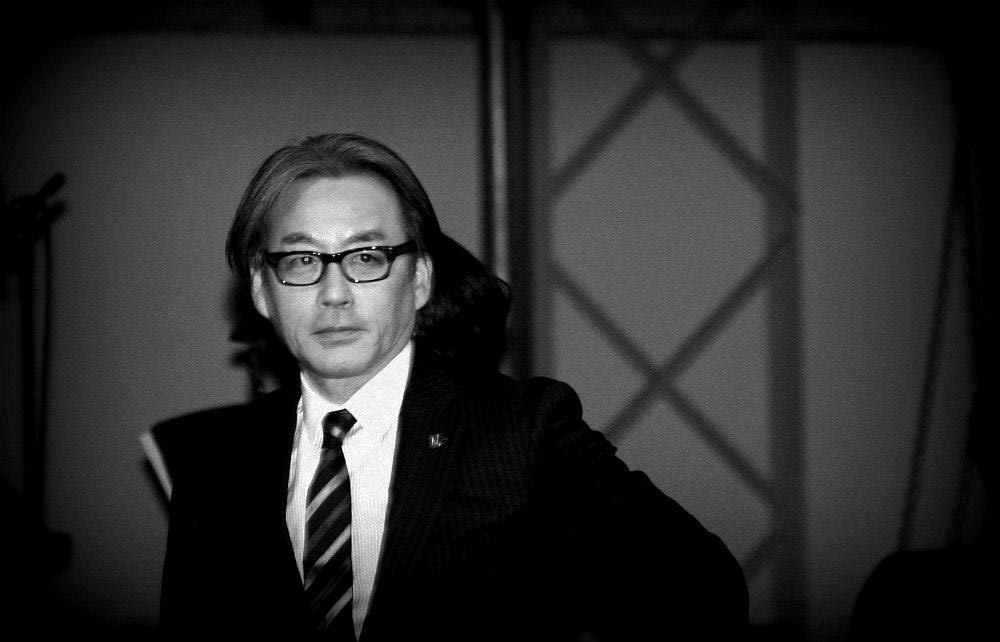 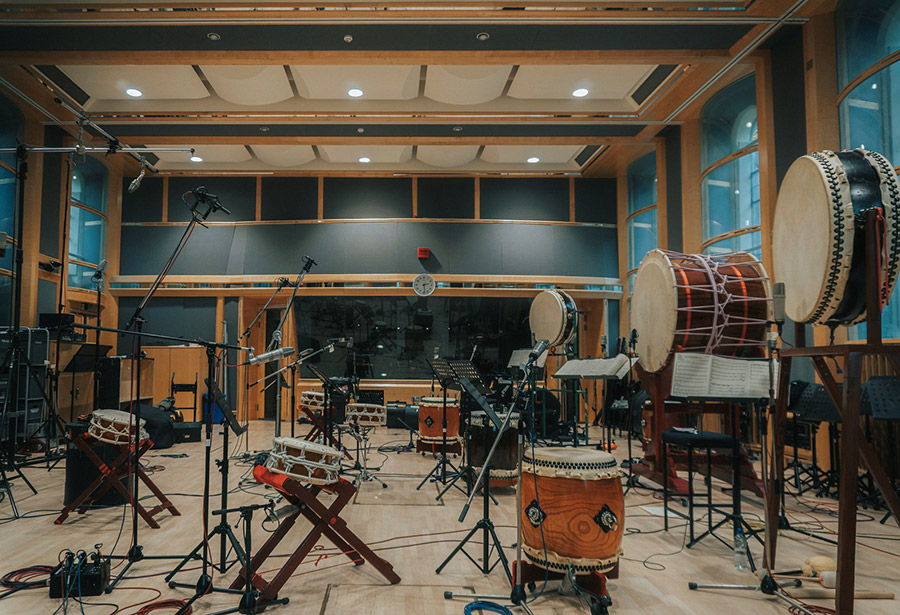 Even before the release, the developers realized that they wanted to supplement the game with a co-op mode, and finally did it on October 16 as part of the Legends update. Sucker Punch added story episodes and survival missions that can now be played with friends. In addition, Legends brought with it the “New Game +” mode, in which the player can play Ghost of Tsushima again on increased difficulty, while retaining the learned skills and equipment. 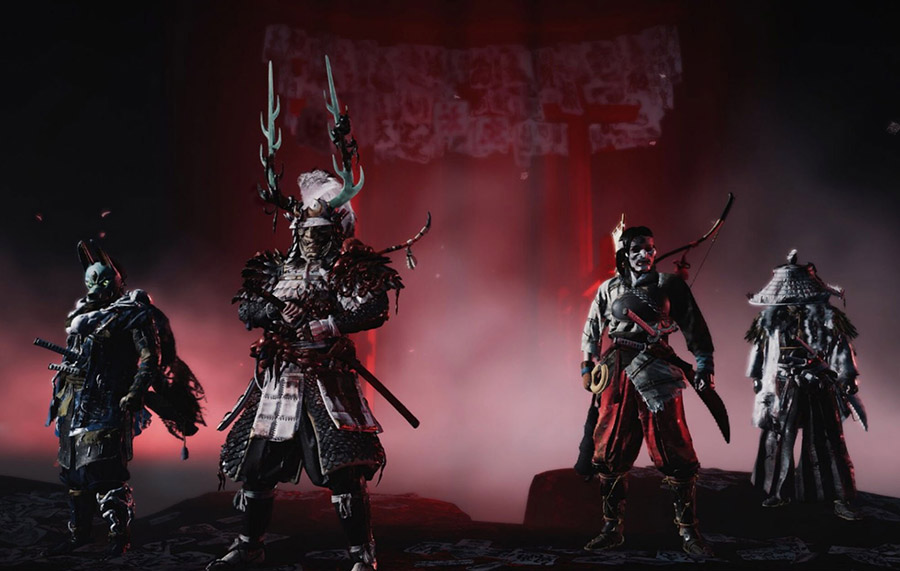 The game was originally supposed to be released on June 26, 2020, but due to the pandemic, the release date was postponed to July 17. Just three days after the release, Ghost of Tsushima became the fastest-selling original title on PS4, selling 2.5 million copies, and Nate Fox and project creative director Jason Connell became Tsushima’s official ambassadors.

Critics were delighted with the visual aspect of the game, but many expressed outrage about the open-world activities and the hackneyedness of many of the title’s gameplay mechanics. Fox himself, on the contrary, was pleased with the non-linear approach to gameplay, where the hero is not led by the hand in all the stories, but only generally show the way.

Incidentally, the success of Ghost of Tsushima has inspired Sony to begin work on a potential film adaptation of the game, which is to be directed by Chad Stahelski (John Wick series). 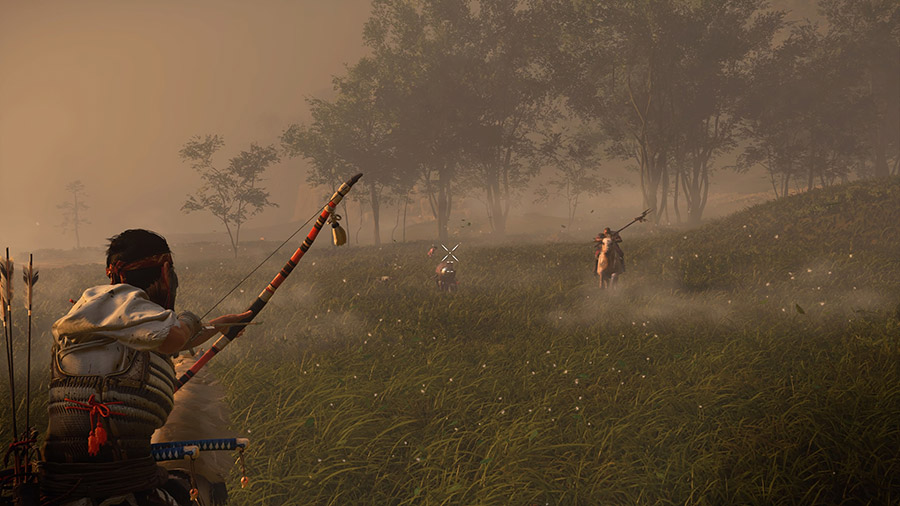 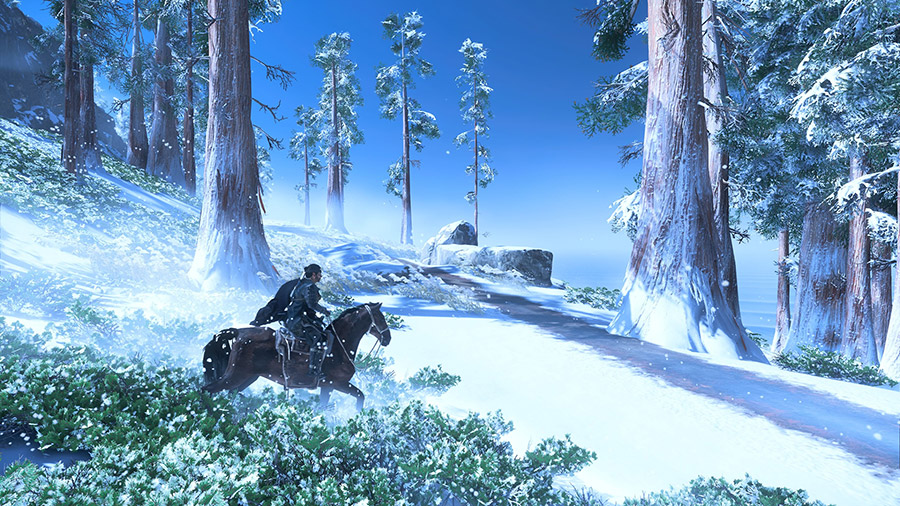 As the developers promise, the highlight of the director’s version of the game for PS4 and PS5 will be an additional location in the form of Iki Island, which Sakai will be able to visit, not to mention technical improvements in the version for the latest PlayStation.

As for the future plans of Sucker Punch, it became known not so long ago that the studio is hiring new specialists to develop a new “grandiose” game revolving around multiplayer. Either way, whatever the next Sucker Punch project, this time around, will have a lot more eyes on it. 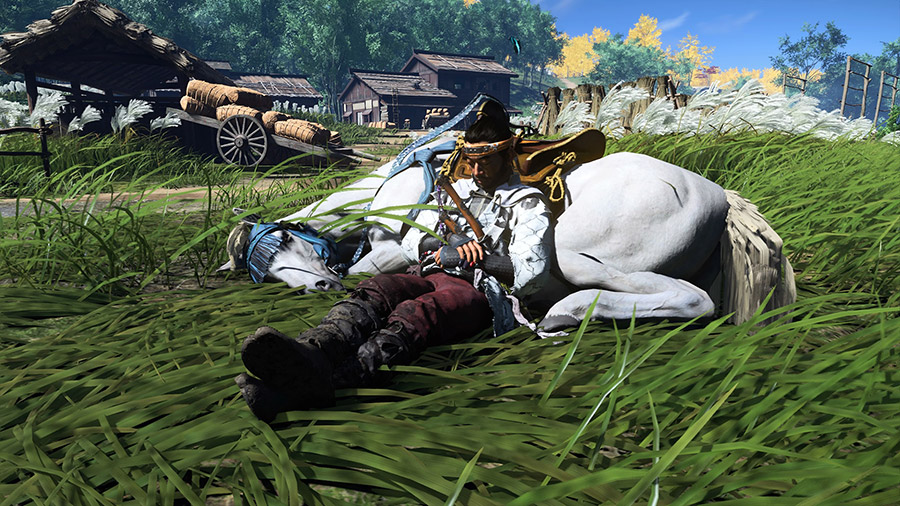 PUBG authors went public with their worst start in 17 years

FIFA 22: Details about what's new in the Ultimate Team revealed

Min-Chi Kuo: MacBook Air will get a completely new design and mini-LED display in 2022