In case you haven’t noticed, Hades is now available on PlayStation and Xbox!

Private Division and Supergiant Games proudly announce that Hades is now available as a boxed edition for PlayStation 5, PlayStation 4, Xbox Series X and Xbox One at the same time as its digital release.

The multi-award winning game has an impressive total of 94 points on OpenCritic and was named “Best PlayStation 5 Game of 2021” and “Best Xbox Series X Game of 2021” on Metacritic.

“At Hades, we wanted to make the exciting experience of rogue-like games more intriguing than ever by designing the mechanics of failure and retry to be central to the story and the fun of the game,” said Greg Kasavin, Creative Director of Supergiant Games. “We really look forward to what PlayStation and Xbox players have to say as they immerse themselves in our vision of the Greek underworld and discover its countless surprises.”

The boxed edition of Hades contains various extras, including a digital download code for the Hades Original Soundtrack with two and a half hours of music by the award-winning composer Darren Korb. 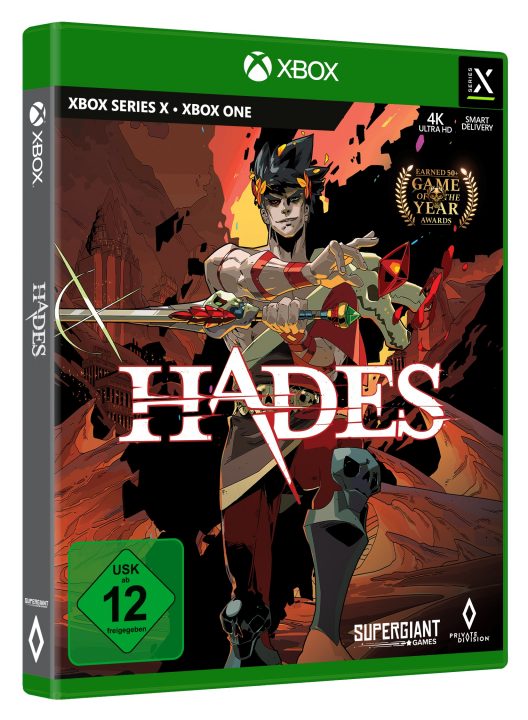 The edition also comes with a color, 32-page character booklet with artwork of the illustrious characters from the pen of BAFTA award winner and art director Jen Zee of Supergiant Games. The first prints of the cover artwork for the box edition for PlayStation and Xbox have also been refined with a cool metal foil.

“Hades has already earned so much well-deserved praise, and we are delighted to be releasing a boxed edition together with Supergiant Games that pays tribute to this grandiose title and brings it to a new audience,” said Roger Kurtz, Executive Producer at Private Division . “The boxed edition appears at the same time as the digital versions for the corresponding consoles, giving players the opportunity to hold this incredible game in their hands for the system of their choice. The additional content of the box edition enriches the gaming experience and allows fans to immerse themselves even deeper into the world of Hades. “

Thanks to the technical requirements, Hades on PS5 and Xbox Series X | S is an absolute feast for the eyes in 4K and runs in 60 FPS. The versions for PlayStation 4 and Xbox One can be played with a resolution of 1080p and also in 60 FPS.

In addition, thanks to the PS5 DualSense wireless controller, Hades has improved controller vibration and lighting. All PlayStation 4 versions of Hades, both boxed and digital, get a free upgrade to the digital PS5 version. The Xbox version of Hades uses Smart Delivery, which allows access to both the Xbox One and Xbox Series X | S versions.

Bitcoin briefly rose above $30,000, but has now fallen again

Fantastic Beasts: A Dumbledore Mystery Coming to HBO Max May 30

Gaming News – The new releases of the week (KW21)

Vice President of Xiaomi about the CyberDog robot dog: the price is lower than the cost, the program code is open, there is no list of functions yet

Governor instructs universities to prepare a roadmap for Amrit Mahotsav