The original Subnautica has become one of the most famous survival games ever. It was a bright atmospheric adventure in the underwater world, where we learned the secrets of an alien planet. The game was interesting for its plot, development system, crafting and how skillfully the fear of the unknown depths was whipped up. After the success of the first part, the developers quickly launched an add-on into production, which grew into a full-fledged game with the subtitle Below Zero. The project went through a long period of refinement in the Steam Early Access. It even came to a complete change of the plot on the eve of a full-fledged release, which caused some concerns.

The original Subnautica offered another variation of Robinson Crusoe, where the protagonist survived on a planet covered by an ocean. And this simple concept looked very convincing and logical. The story was overgrown with details related to the alien presence and the viral threat, but this was organically integrated into the overall concept of the gradual study of the world. Below Zero events develop later than the familiar story, when the planet 4546B is actively explored. The heroine of the sequel is looking for the missing sister, who with a group of scientists was engaged in research on the surface. She escapes from the orbital ship and after a hard landing in the Arctic zone begins the usual struggle for life, collecting resources and studying the remains of other bases. 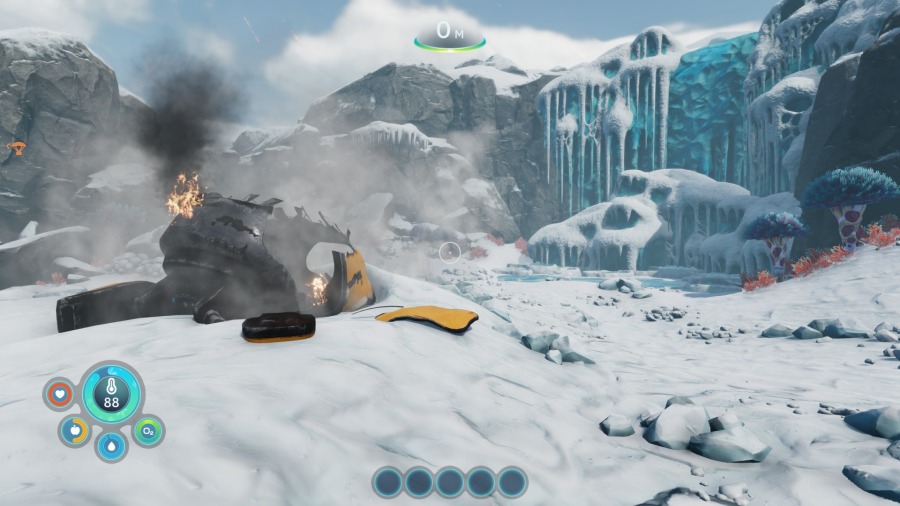 In search of a sister, we come across not only audio diaries, but also full-fledged living characters. For a significant part of the plot, the heroine is chasing a militant-looking lady who portrays an evil hermit. For the first time in the series, full-fledged dialogues and cut-scenes await us. The second important character will be an alien, who for a while will become an invisible companion in our adventures, periodically reminding of himself with various comments. 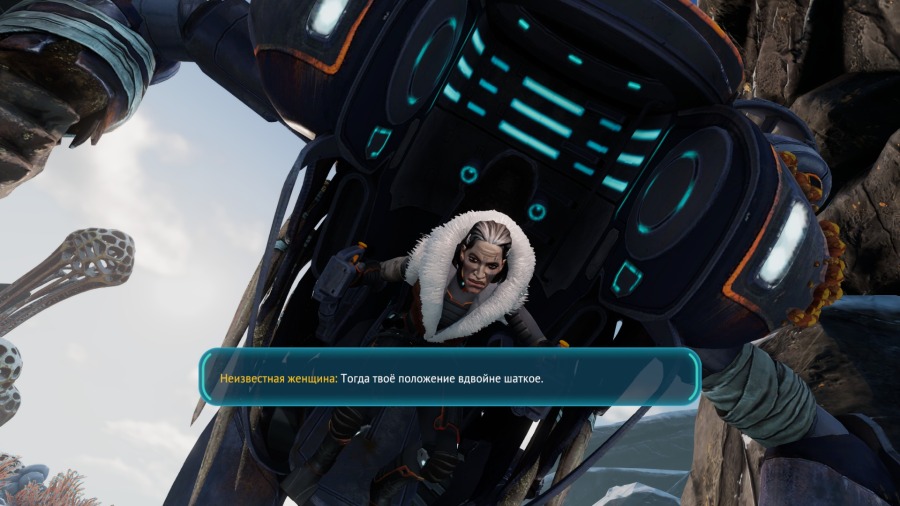 The story seems to have become richer, but in reality it has little effect on the pace of the game. And if we talk directly about the fate of the sister, then you will still learn all the important information from the audio recordings.

The first steps in Subnautica involve collecting basic inventory items. Initially, we have one basic subsea module and a manufacturer at our disposal. Collecting minerals and other components, we create the main ammunition in the device – a knife, a flashlight, an oxygen cylinder, etc. This allows you to swim for longer, dive deeper and penetrate into new areas. 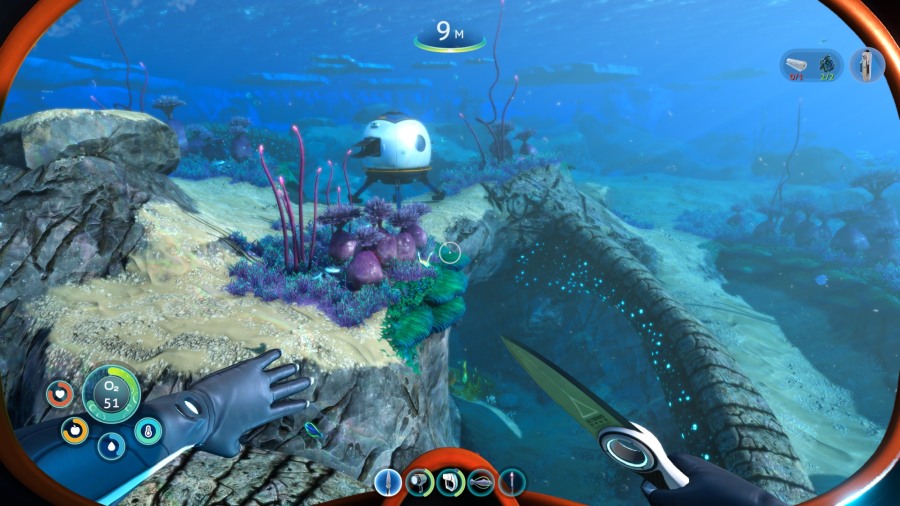 The peculiarity of Subnautica is that, with its small size, the game world is a volumetric environment, going deep into the depths. And the deeper, the more dangerous and difficult the immersion process. At the same time, Below Zero retains all the conventions of the original game, where pressure does not affect the character in any way, only oxygen consumption. We do not need a special suit to swim at a depth of 500 meters, but without special equipment you simply cannot reach that mark. 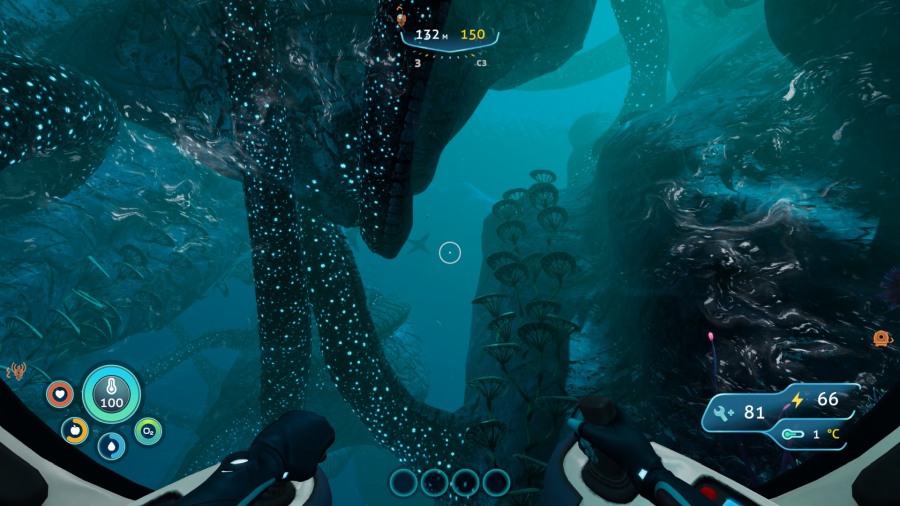 An important constraint in Subnautica was fear. Strange sounds and someone’s roar in the depths made us tense every time we swam into an unknown place. And each time the game skillfully justified these fears, showing amazing and creepy creatures. And an attempt to break out of the playing area ended in an attack by a huge leviathan. Combined with poor visibility, it was a real horror, and the anticipation of meeting an unknown danger caused a constant feeling of anxiety. There are also many predators in Below Zero, but it will take a long time to meet truly formidable monsters. And the small representatives of the aggressive fauna can be easily avoided. And the edges of the map are not limited by the danger of powerful predators, but by ice walls.

To survive, you need to periodically eat and drink water. All this can be obtained from the fish swimming around. Ammunition items and vehicles are available after we receive the required blueprint. To do this, you must first scan the corresponding debris or part of the desired item. The first important acquisition will be a fast travel glider. Then we collect data for the construction of a submarine “Seafarer” and a deep-sea walking “Crab” with large manipulators that can chop mineral deposits and fend off predators. 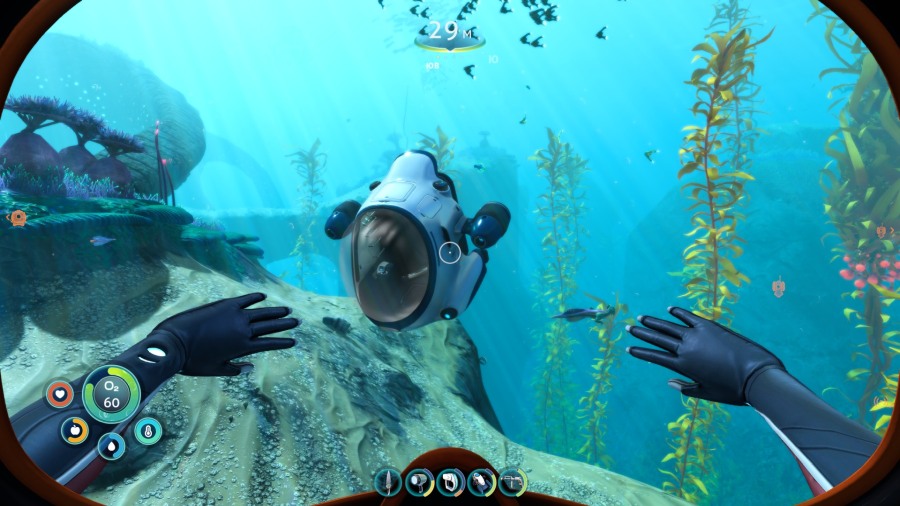 Basic blueprints can be collected after a detailed study of the nearby zones. Making complex things will require longer underwater searches. Important elements and debris are tied to plot locations. If you find the remains of a sunken spaceship, there will be a lot of story information in it and you will scan elements for many blueprints. In this case, the game tries to duplicate important items. If you missed Crab items in one place, you can find and scan them in another. But this does not exclude a situation where the process will stall due to the fact that the drawing is missing one element. 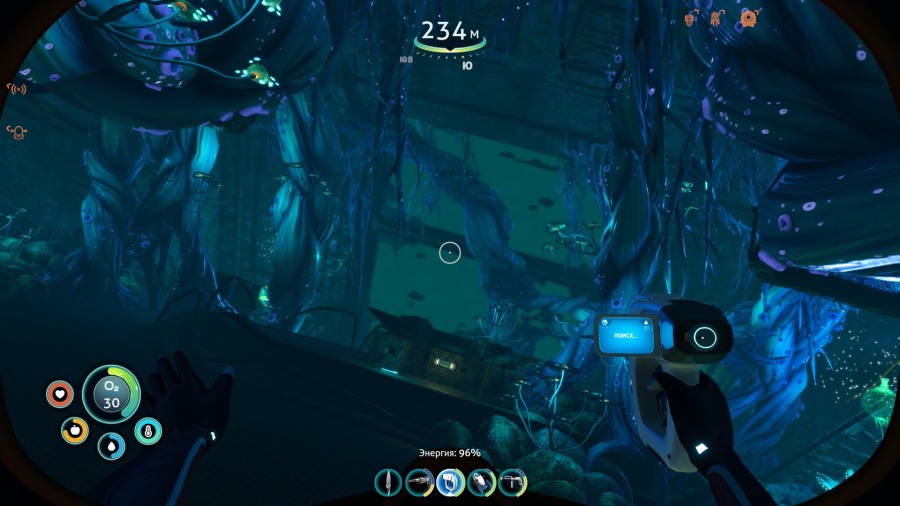 In my case, it turned out even funnier. The Sailor and the Crab have already been built, Margaret’s lab, Phi’s lab and a bunch of other areas have been discovered. That is, the map has already been studied well, but the tool for creating the base has not been found. As a result, I had to climb for a clue in the passage, and suddenly it turned out that the necessary tool was lying on the central island with a lighthouse, which was avoided up and down. But all visits took place at night or in bad weather, so the subject was missed. But then I found another such tool in the area of ​​the floating platform, where everything, it would seem, has been studied in even more detail. 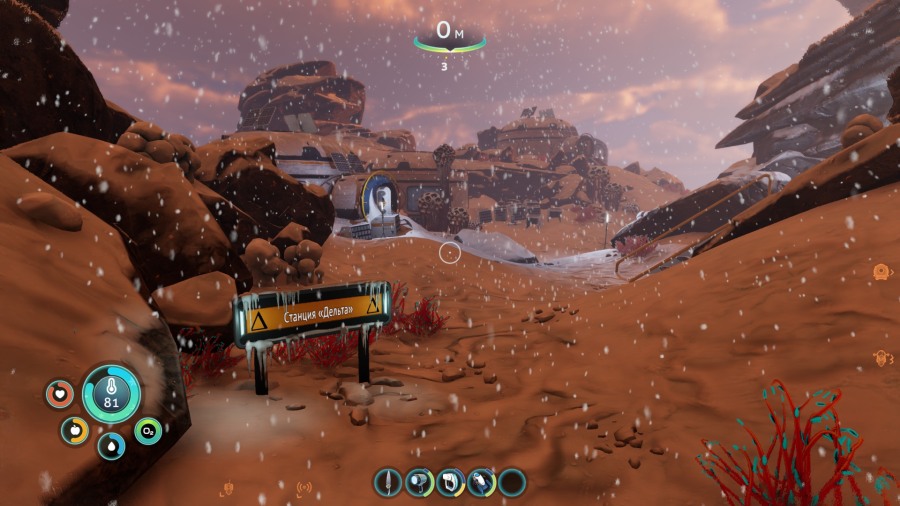 Similar situations are possible due to the complex underwater landscape with labyrinths of caves. On the one hand, it makes the study of the underwater world more interesting, but here you can naturally get lost and lose sight of something important.

Attentiveness and thoroughness when inspecting all places is an important element of the passage of the game. Traditionally, there is no map. We orient ourselves based on memory and noticeable objects of the landscape. This has its own charm and the atmosphere of an explorer, but it also creates its own difficulties. Orientation by islands and icebergs would help with surface movement, but visibility suffers from bad weather. It often snows, a blizzard and everything is shrouded in fog. And in the dark it is even worse and the visibility is sometimes zero. Therefore, it is better to plan outings in time, stocking up on provisions and going on an expedition so that the main searches go in the daytime. 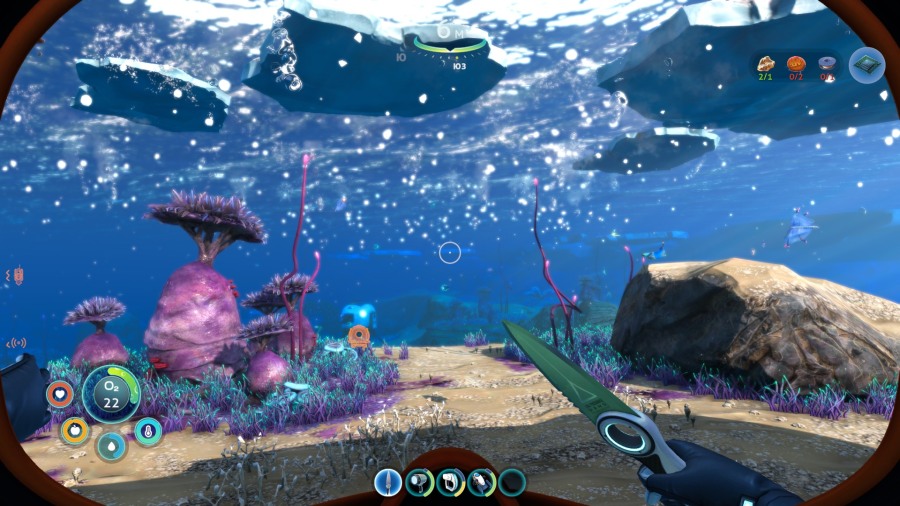 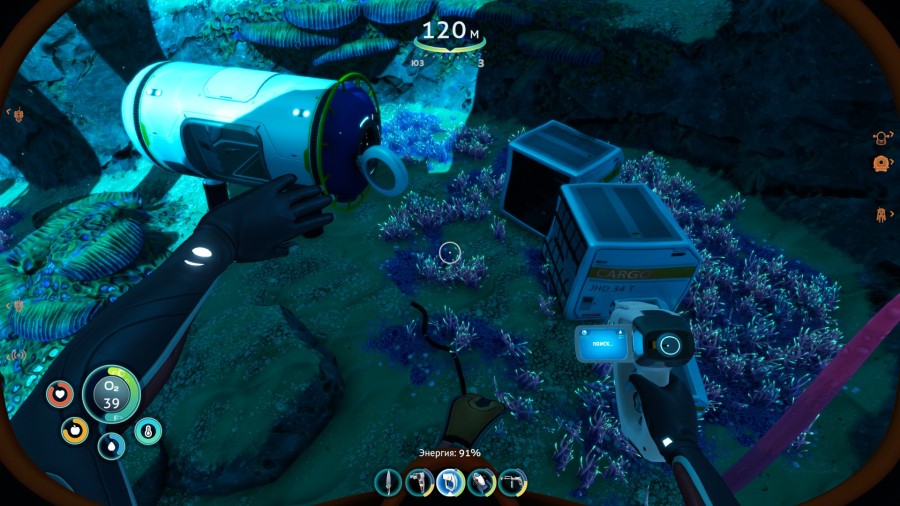 More time is allocated for the water adventure. We have access to many ice zones, where we constantly hide from bad weather and bask in caves, near geysers or special plants. It has its own predators and its giants, and to quickly move along the twisted icy paths, you will have to assemble a special “Polar Fox”.

The changes in maritime transport were the result of the increasingly complex landscape and the shrinking of the maritime zone. Now there is no need for a large “Cyclops”, on which we sailed from one point of the map to another, to descend on the “Crab” into the dark depths. The small nimble “Sailor” is the optimal solution for narrow aisles. You can attach additional modules to it, but then the maneuverability and sense of this device are lost. It is easier to build a base somewhere in the center of the sea zone and from it make sorties to different areas. 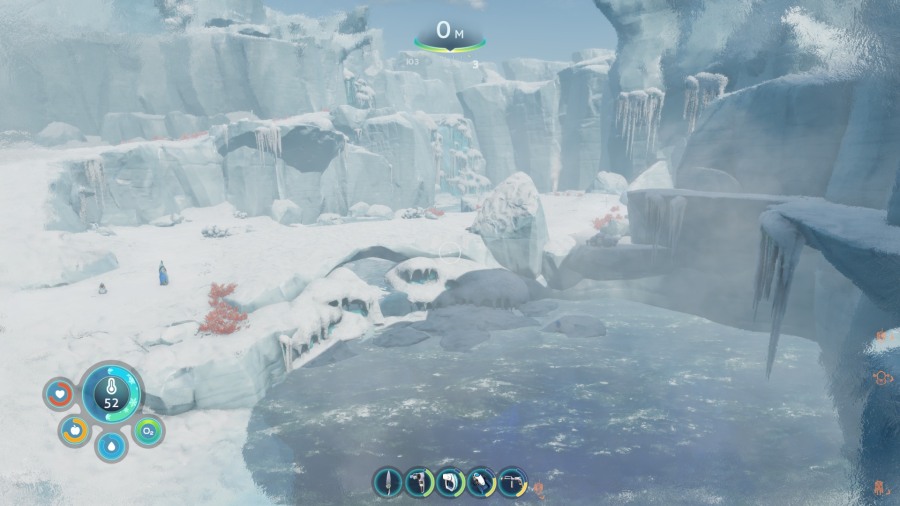 The presence of the base expands our capabilities, allowing us to assemble devices for charging batteries inside, collect upgrades on a special machine, grow food and generate healthy coffee. The main thing is to correctly build the foundation or strengthen the hull at great depths. Then you can hang additional modules with a search station that will help you search for minerals, with a docking station for sea transport, and put rooms with beds. And when you start to build all this, you will gradually want to acquire a view room with glass walls in order to admire the beauty of the sea world or watch the sunrises from the top of an elevated mountain. 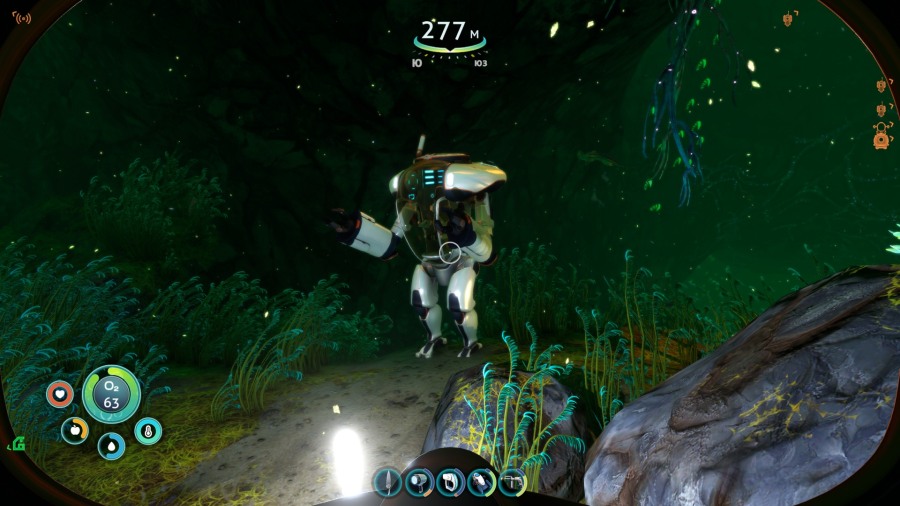 Resource management and component sourcing is the main activity in the game. Carried away, we sometimes forget about the main story, which is the impetus for development as a result of chance finds. This is facilitated by the presentation of the plot. Everything related to the main line must be searched for by the clues and conditional landmarks. The question often arises: “what’s next?” Something similar happened in the original game, but Below Zero has even fewer landmarks, more difficult terrain, and the weather severely restricts visibility. As a result, the phrase “Look for me a kilometer to the east!” may end with a long search in the labyrinth of icebergs. 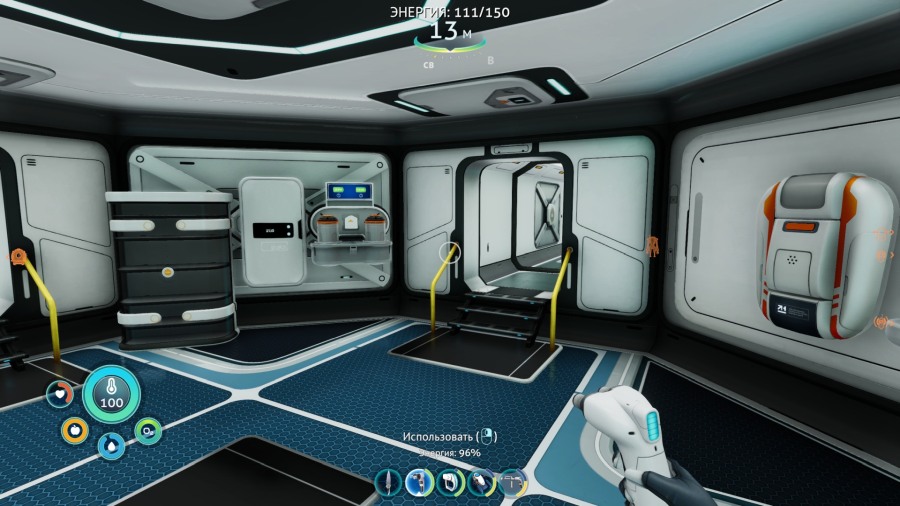 The plot is clearly stretched due to side effects. And when trying to put more emphasis on the narrative, the story is sometimes perceived as chaotic and superficial. Replacing the script and reworking the plot at the last moment did not help.

Technically, the game is made on the Unity engine and does not offer any obvious differences from the first part. There are new weather related effects. Probably, we tweaked LOD a little – drawing of large objects is faster. The game impresses with its visual style and variety of natural zones. 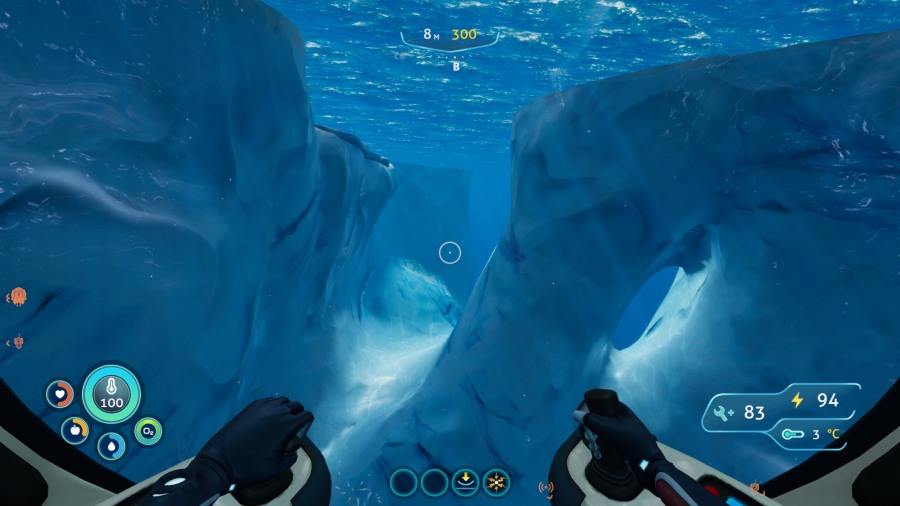 The game world is divided into several biomes with unique flora and fauna. There are more corals, algae and small fish in shallow waters. Around the geysers, there is a completely different environment and inhabitants. In a separate zone, there are huge lilies with roots that go far to the bottom. Somewhere majestic analogs of whales are splashing, somewhere terrible krakens and jellyfish live, and on the deep bottom completely unearthly species await us.

Below Zero biomes look familiar, but they have their own unique features and new creatures. Terrestrial ice zones are perceived as unusual. And while the departure from the nautical theme may not be to some people, it brings new sensations and variety to the game. 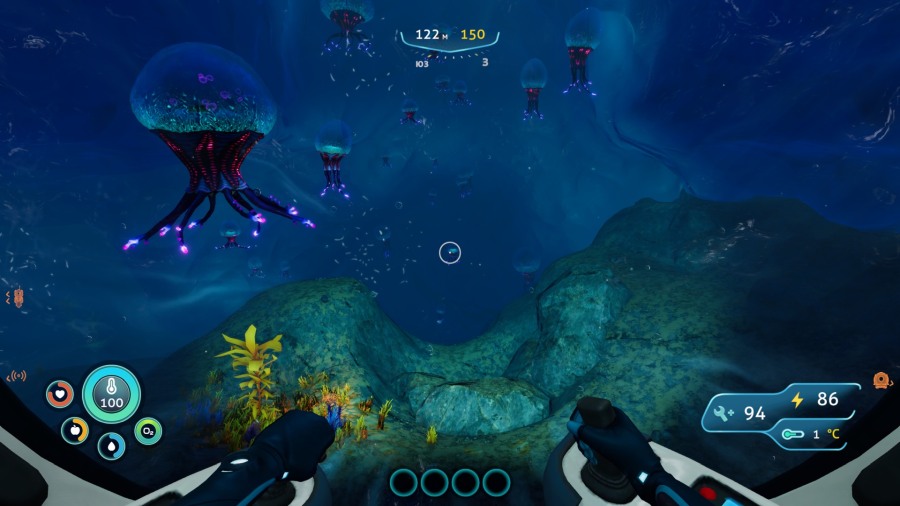 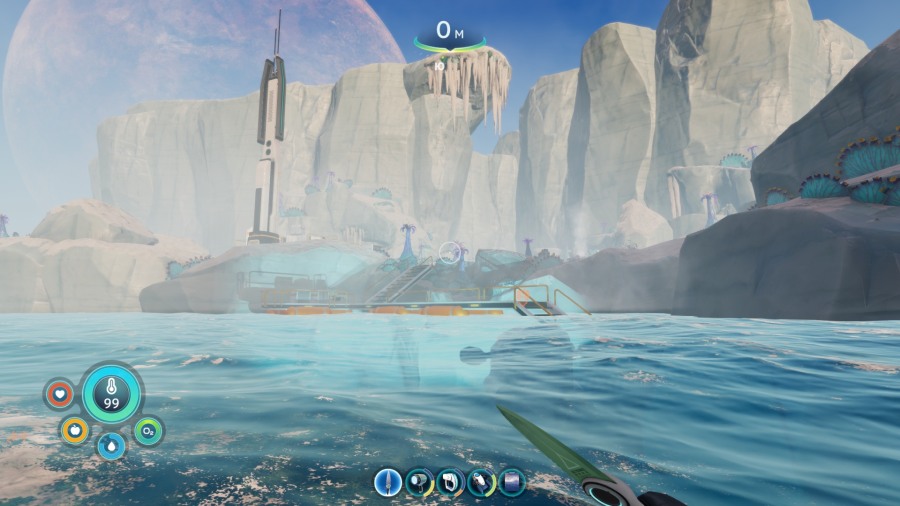 If the main symbol of the original game can be considered formidable leviathans, then Below Zero is strongly associated with cute pig-wings. 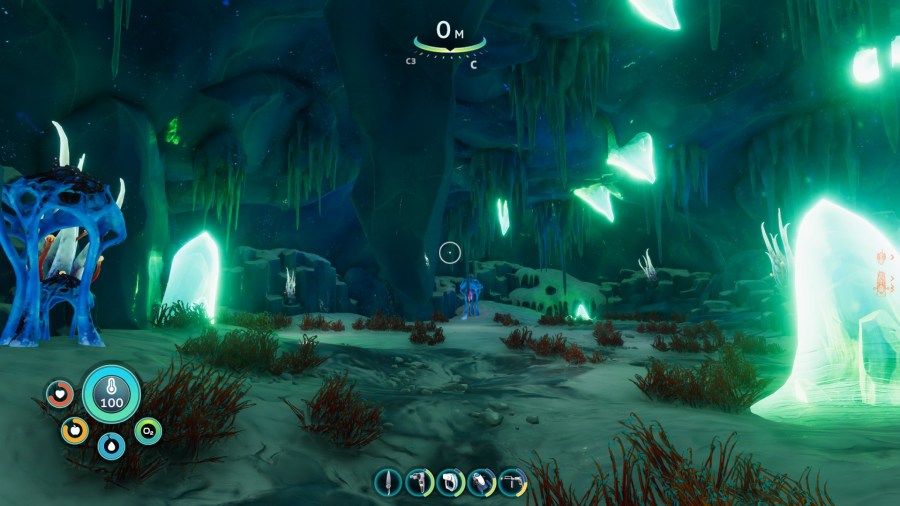 The system requirements for the game are quite modest. We carried out a detailed analysis of performance in a separate article. Old video cards GeForce GTX 1060 and Radeon RX 580 will cope with Full HD. For 4K you need top models of the level of GeForce RTX 2080 Ti and Radeon RX 6800.

Subnautica: Below Zero looks like a logical continuation without any attempts at drastic changes. The game is built according to a verified scheme with a gradual study of the world, where progress is tied to the search for resources and the creation of new equipment. It all worked well before and works well now. However, the main plot is often lost over resource management and endless hunt for ingredients. Below Zero’s key difference is in new biomes and icy surface locations. In this regard, the game can surprise and evoke the old feeling of a keen explorer of an alien planet. But expecting something fundamentally new is not worth it. If you are a beginner, then the original Subnautica will bring more emotions – it wins with a creepy atmosphere, and the story seems more coherent and logical.

The fabulous RPG Kitaria Fables has been released

Schedule of Ukrainian women at the US Open on September 2