G.Skill products have been present on our market for over 10 years and during this time they have gained wide popularity among enthusiasts and overclockers due to their excellent potential for advanced solutions. The Trident Z series has proven itself well, which has become the main one for this manufacturer and whose representatives differ from each other only in external design. Different coating and color of radiators or decorative elements, the presence or absence of backlighting – all this brings a certain variety to the lineup. Unfortunately, some solutions, due to their appearance, nevertheless caused an ambiguous reaction among domestic users. Naturally, we are talking about the Trident Z Royal series. 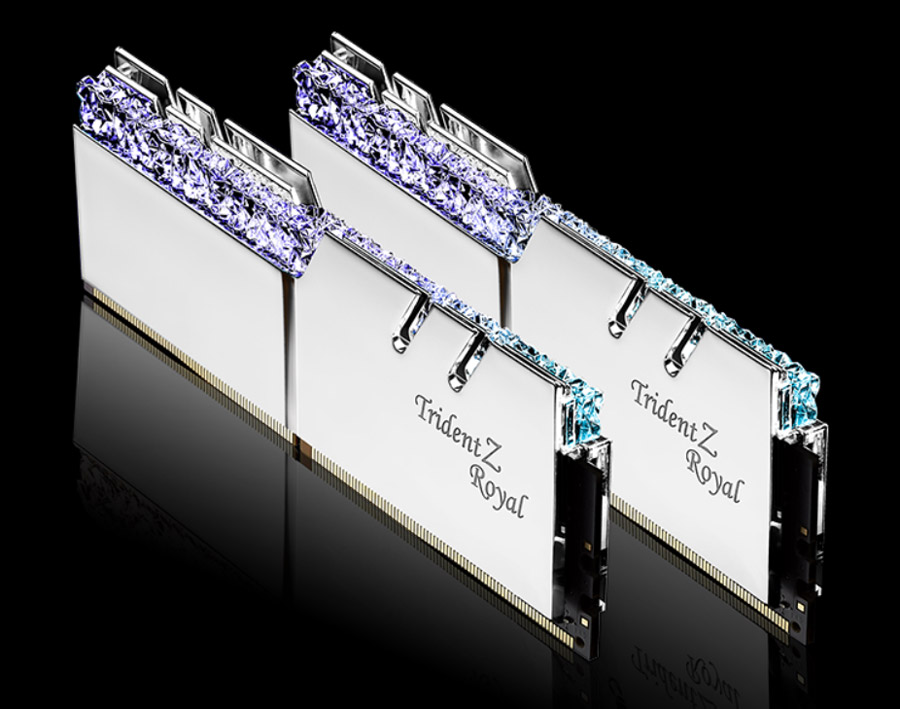 But, as they say, they are greeted by their clothes, but they are escorted by their minds, i.e. by potential. And what is it in our copy of G.Skill Trident Z Royal F4-4000C17D-32GTRSB – we will try to find out.

The memory kit comes in a black solid-colored cardboard box without any colorful printing and looks more like jewelry packaging than ordinary computer components. 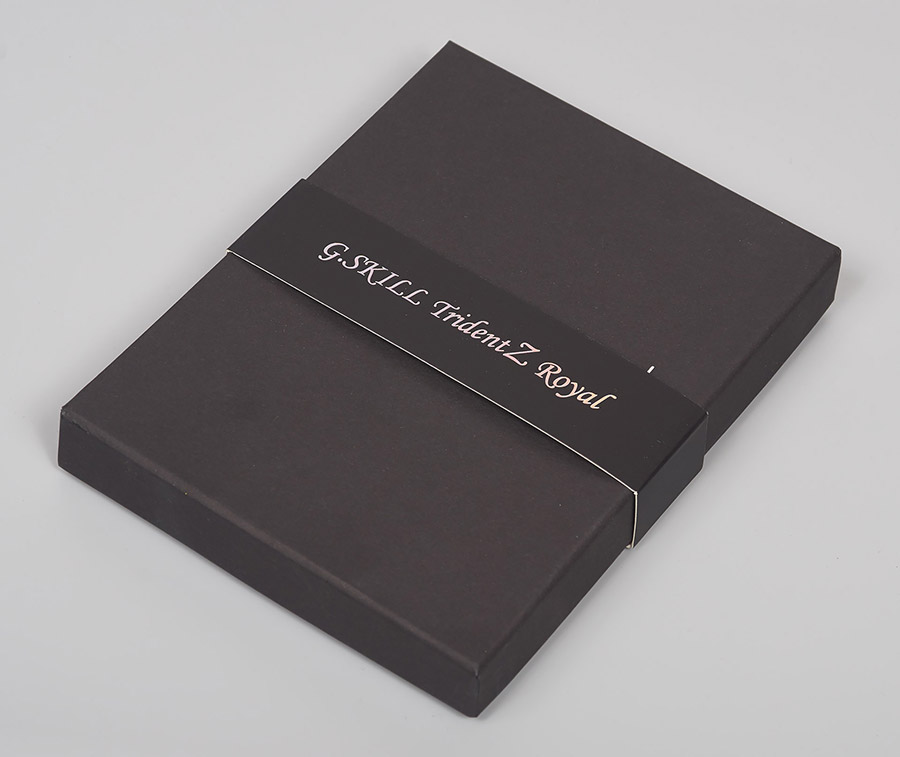 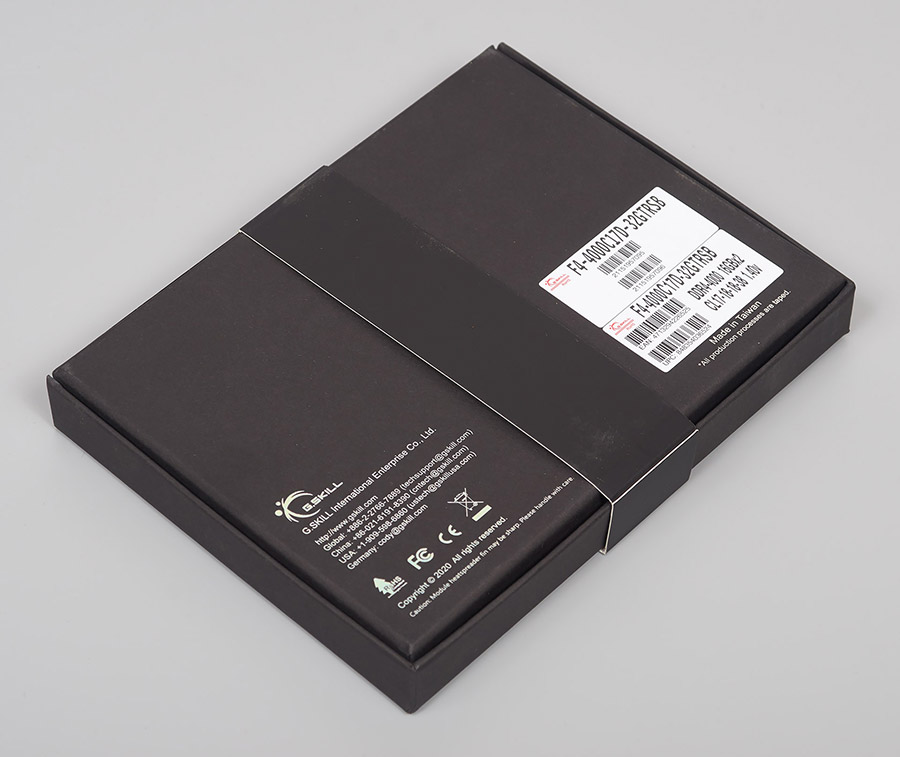 And so much pathos was invested for a reason – opening the box we see two silvery “ingots” located in the form of foam material. Additionally, the kit contains an insert with a proposal to register the purchased product, a sticker with the company logo and a microfiber cloth for cleaning the strips. 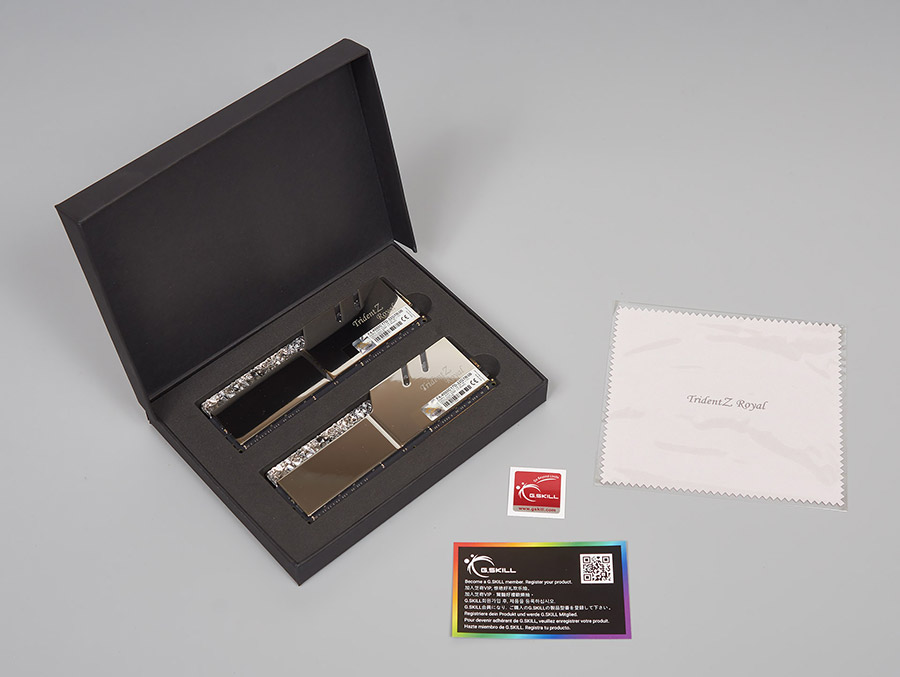 And to be honest, the rag will not be superfluous, since the modules have a glossy coating on the radiators, they are very easily soiled and fingerprints easily remain on them, and if they are not wiped off in time, then the traces have a chance to remain forever. The factory film partially saves from contamination, but after installing the modules in the motherboard, it should still be removed so that it does not affect the heat transfer of the radiators. 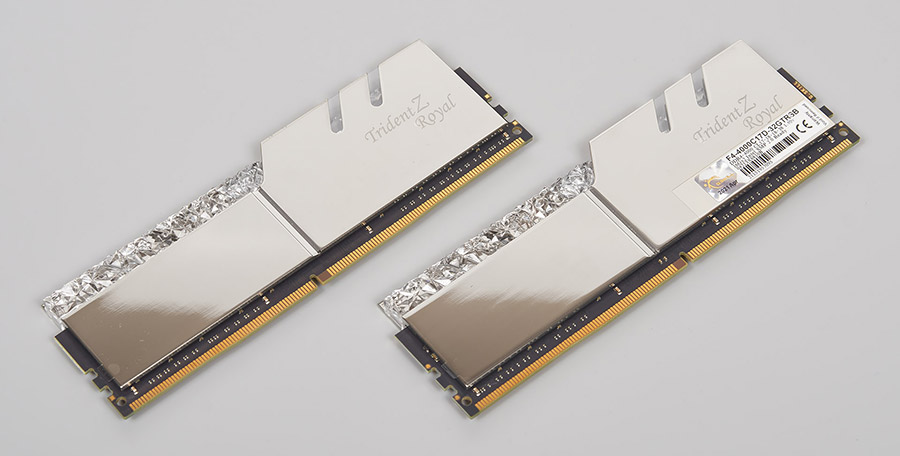 The shape of the strips is the same as the first Trident Z, but instead of anodizing, they now use a silver electroplated coating, and a transparent plastic insert is made with facets like precious stones. Looks glamorous, but not everyone likes this look.

The halves of the radiators are made by milling from a rather thick piece of aluminum alloy and are attached to the chips by means of “thermal adhesive”. The light guide is overlapped in the upper part, which increases the rigidity of the entire structure. 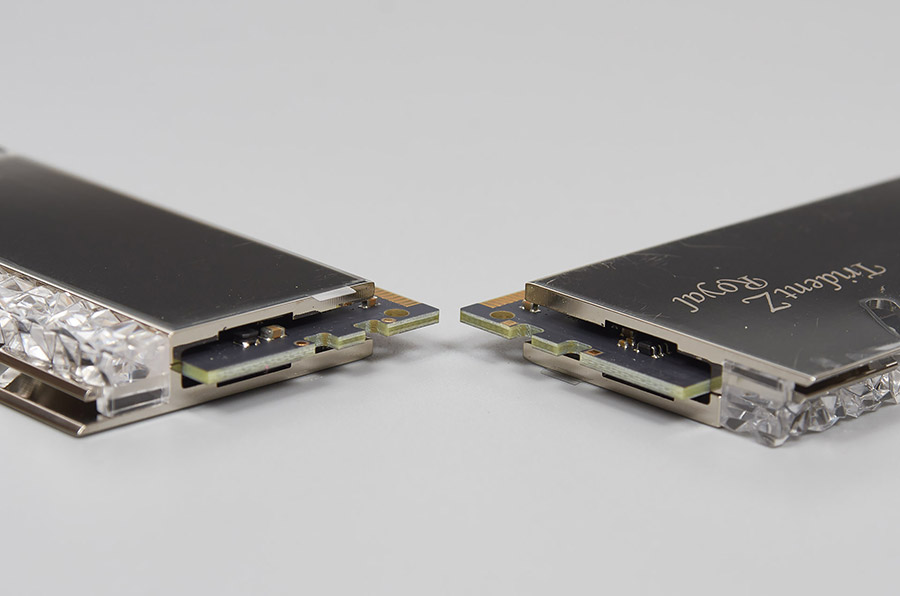 Considering the volume of each bracket, equal to 16 GB, 16 Samsung K4A8G085WB-BCPB microcircuits are soldered on the PCB, eight pieces on each side. 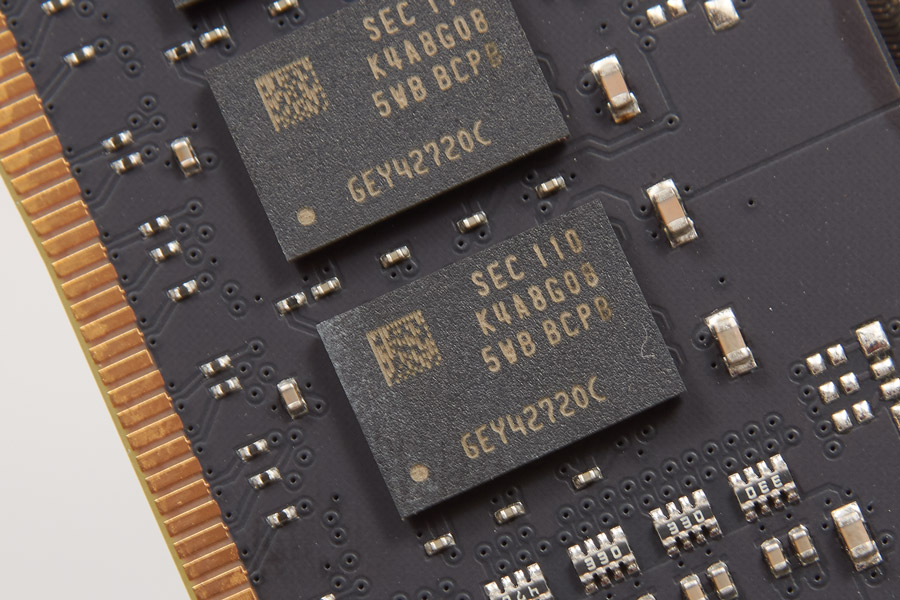 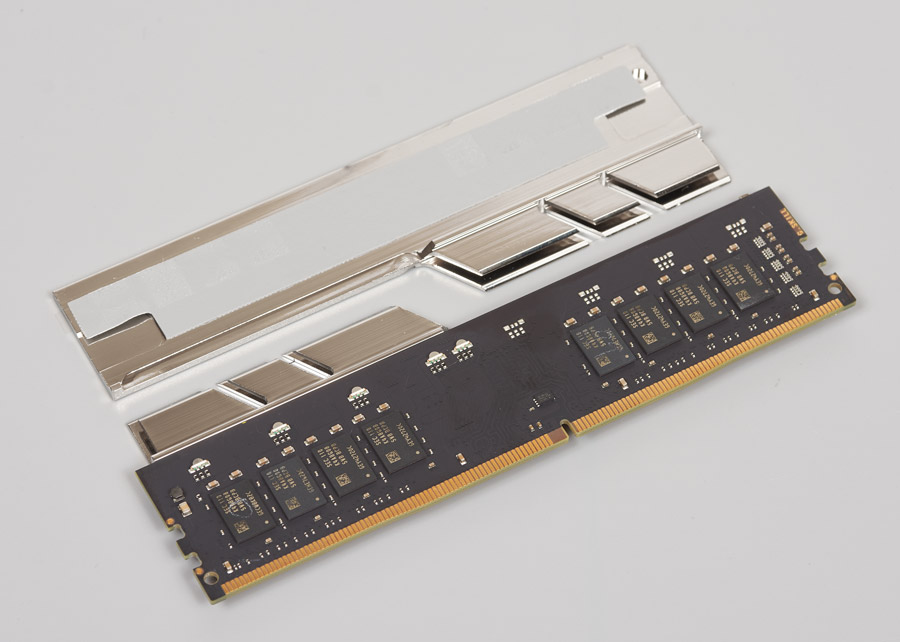 The backlight can be controlled by both a proprietary utility and programs from motherboard manufacturers, such as Asus Aura Sync, Gigabyte RGB Fusion, MSI Mystic Light and ASRock Polychrome Sync.

There is no synchronization between the modules, but due to the shape of the fiber, beautiful multi-colored effects are created, so that even with asynchronous operation they look very good. 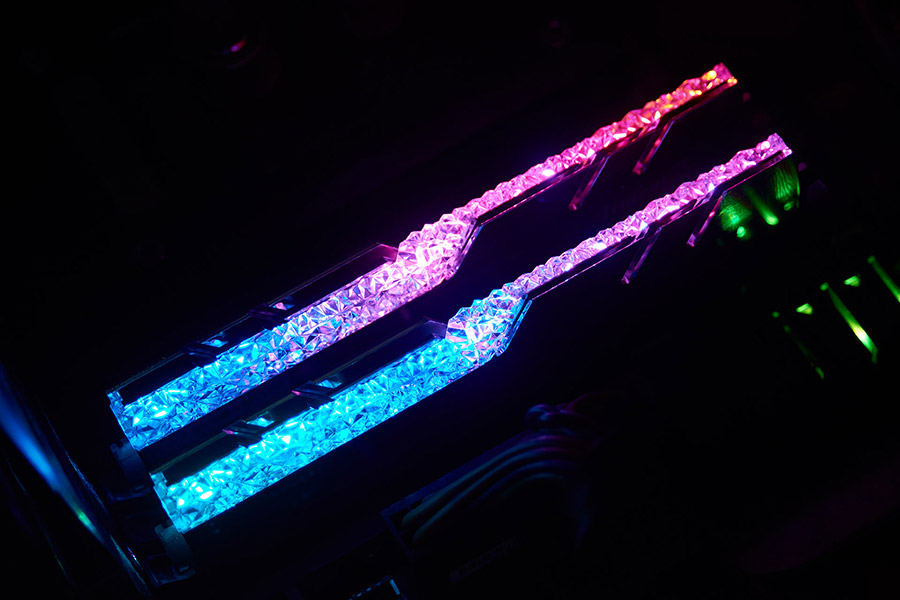 Each strip has a sticker with the name of the kit and an indication of its frequency, timings, operating voltage, volume and number of modules in the kit. Quite informative, given that some manufacturers, even of the first echelon, do not care about this. 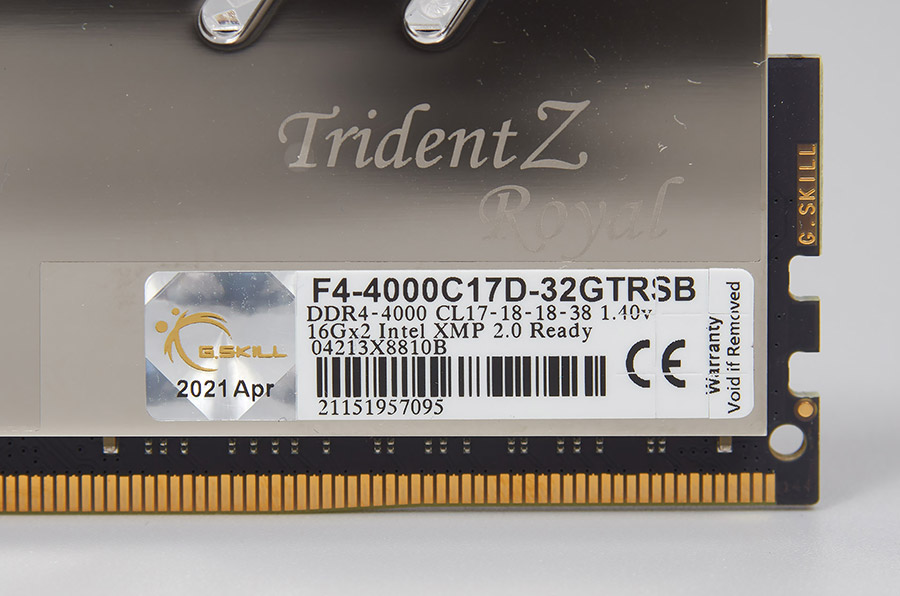 The two-channel G.Skill Trident Z Royal F4-4000C17D-32GTRSB 32 GB kit is designed for a frequency of 4000 MHz with timings 17-18-18-38 at a voltage of 1.4 V. Naturally, such settings will be available after activating XMP, until that moment the memory will operate in JEDEC mode.

The memory was overclocked on the AMD platform with the following configuration:

Tested on Windows 10 x64. To check the stability of the modules overclocking, the LinX 0.7.0 AMD Edition program was used for 15 minutes, the memory capacity of which was set at 12288 MB. For an additional check, the y-crancher benchmark was used with the maximum task for the entire amount of RAM. The computational cores of the processor worked at the default frequency, the voltage on the SoC was set at 1.131 V. At all frequencies, the memory worked with a Command Rate of 1. The modules were additionally blown by a 92-mm fan.

Of course, for our kit it would be better to use the modern Intel platform, since it allows you to easily increase the memory frequency above 4000 MHz, but with the release of the Rocket Lake-S processors, the efficiency of high-frequency RAM has been reduced to naught and values ​​above 3600-3800 MHz transfer the memory controller to slow mode. But for AMD solutions with a Vermeer core, you can get the maximum performance at 3800-4000 MHz, depending on the CPU instance, which looks more interesting.

Considering that our Ryzen 7 5800X is reluctant to take 2000 MHz for the Infinity Fabric bus, we will limit ourselves to stable 1900 MHz, which ultimately gives us 3800 MHz of memory, and tuning all latencies allows us to reduce latency quite well, as we will see below. 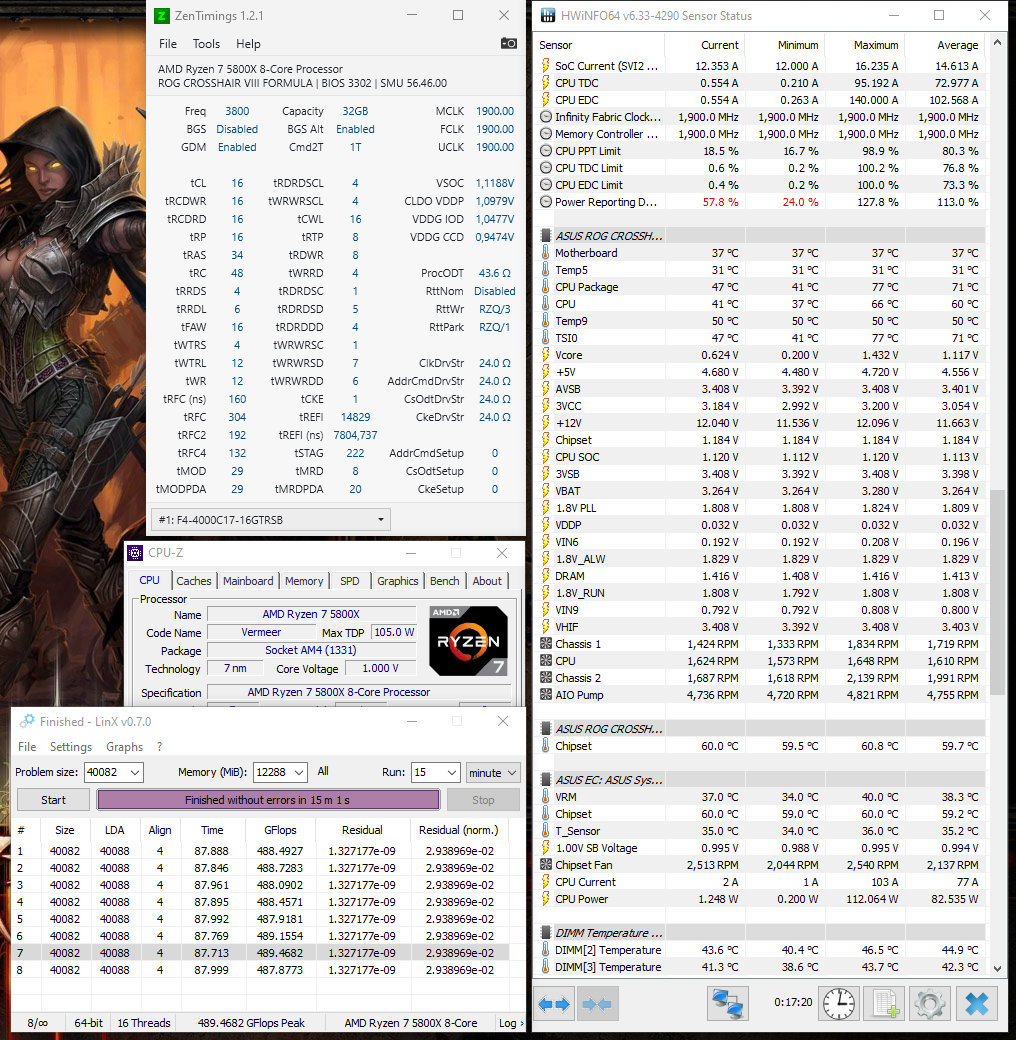 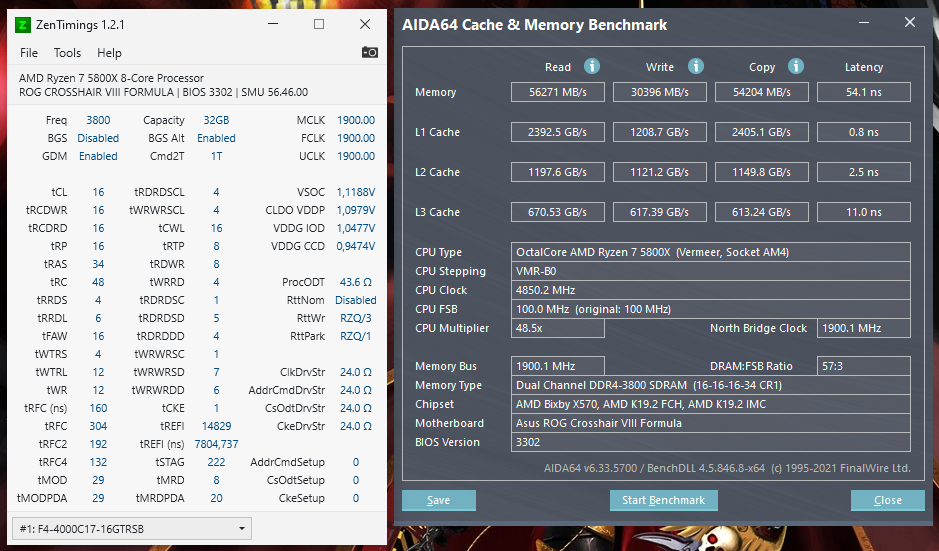 In this mode, the system retained full stability and it was even possible to go through several passes of the benchmark of the Shadow of the Tomb Raider game, which is highly sensitive to memory overclocking.

Now let’s take a look at the capabilities of the kit when working at the native frequency. True, in this case, the IF bus will operate at 1800 MHz, and the memory controller – at 1000 MHz, but the timings will remain the same, except for RFC and RDWR, which had to be raised to 320 and 9, respectively. 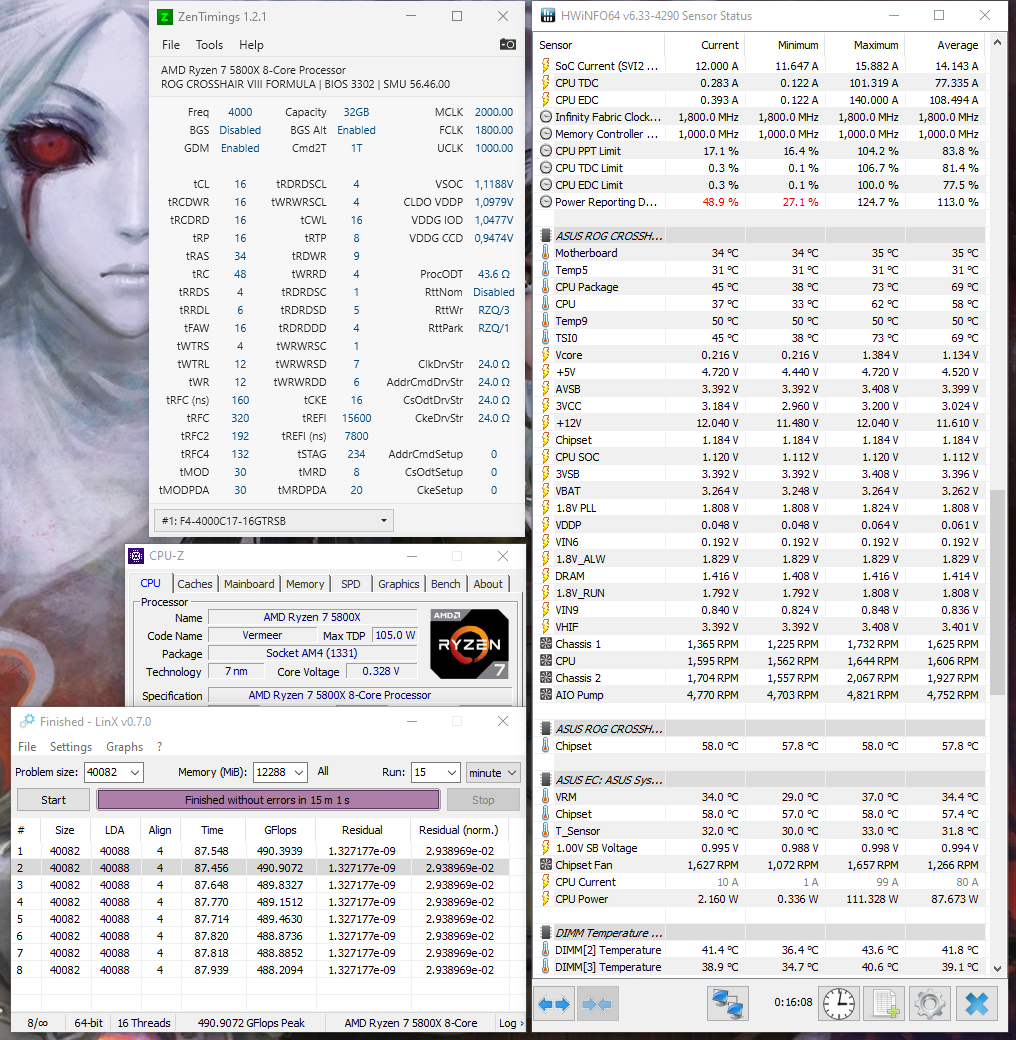 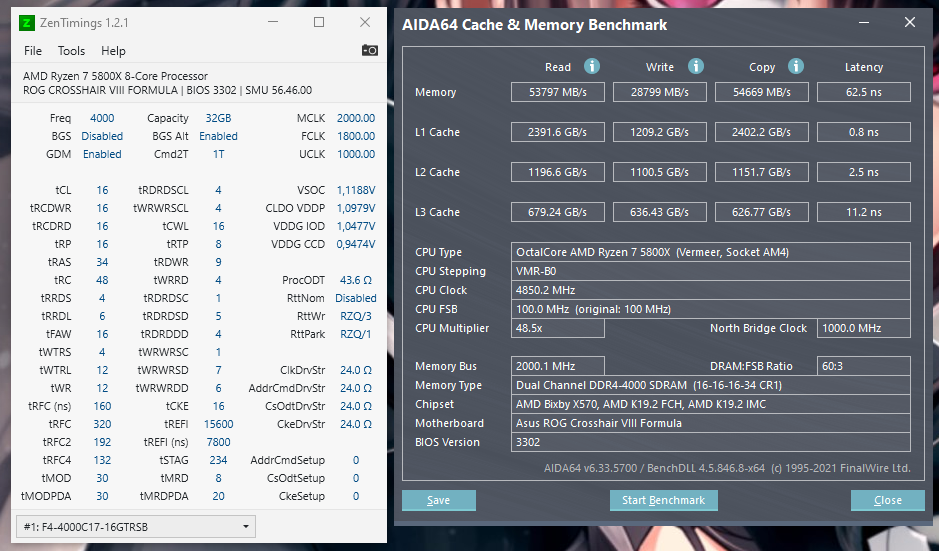 There were no stability issues here either, and the system passed all tests, including Shadow of the Tomb Raider. The supply voltage, as in the case of 3800 MHz, was equal to 1.425 V.

With the Trident Z Royal F4-4000C17D-32GTRSB kit, G.Skill has proven to be one of the best memory kits for enthusiasts looking to get the most out of their hardware. With its help, you can easily speed up the operation of systems based on the AMD platform by fine-tuning the RAM, and not only at a frequency of 3800 MHz, but also at the native one. Of course, the design of the Trident Z Royal series is not for everyone, but for some it will go and even fit into assemblies with an eye to modding, especially when using custom water cooling. If there is no desire to overclock, then you can take a closer look at the faster kits from this manufacturer, but the price tag there will be almost twice as high. 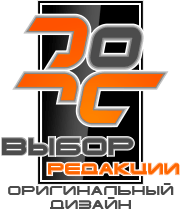 VIDEO. The reaction saved. Messi nearly broke his leg in the international match