Wearable electronics are making their way to the masses, still in the form of bracelets and key rings, but with an eye to built-in options. Hiding electronics in clothing or as a patch on leather requires extremely flexible substrates and appropriate circuit technology. Flexible processors are already being released. The turn has come to flexible memory. And which! 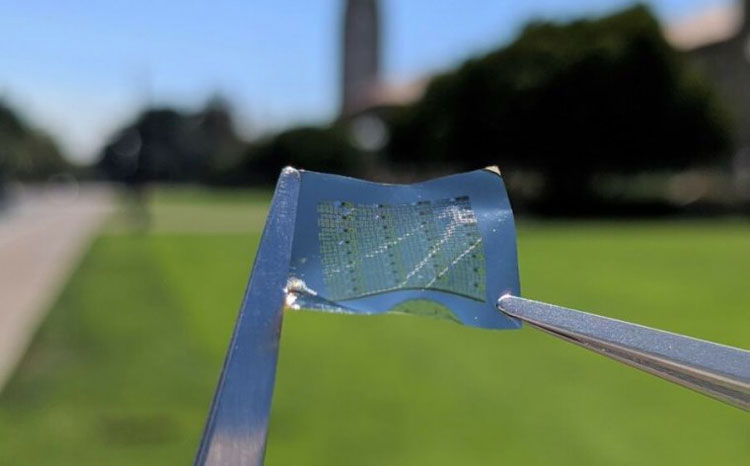 A group of scientists from Stanford University presented a technology for manufacturing memory on a flexible polymer base based on the principle of reversible change in the phase state of a substance (PRAM, Phase-change Random Access Memory). We can say that a huge number of people living now have encountered PRAM memory. CD, DVD and Blu-ray rewritable optical discs work on this effect. When the laser is heated, the disc layer to be written changes from a crystalline state to an amorphous one and vice versa, reflecting the reading laser in each case in different ways.

The same scheme works in PRAM memory chips – by passing a strong current through the cell, we melt the structure, and then, by adjusting the cooling time, we get either a crystalline state or an amorphous state (and even several intermediate ones, which makes it possible to write more than one bit of data into each cell ). Data reading occurs with low currents – an ordered crystal will show a low resistance, and a chaotic amorphous one – high.

PRAM is already in production in one form or another. The production of PRAM by Intel has reached the largest scale. Its 3D XPoint memory is nothing more than arrays of PRAM cells. Scientists from Stanford were able not only to make such memory flexible, but also discovered the ability to significantly reduce its power consumption, which, by the way, can be adopted by Intel.

The researchers fabricated PRAM memory on a flexible polymer substrate with an additional insulator in the form of aluminum oxide. A transition from alternating layers of tin telluride and a compound of tin telluride and gallium is used as a cell. It turned out that the polymer in combination with aluminum oxide turned out to be such a good heat insulator that the consumption of PRAM in the erase mode, when the cell array melts, is reduced by 100 times! Heat is banally stored inside the cell and much lower currents are required for re-melting.

Scientists also confirmed that such a memory on a flexible substrate can withstand multiple bends with a radius of 8 mm, which was tested at 200 bends. The number of reads (not writes) has reached 1000 times, which confirms the non-volatile properties of the cell. The speed and other characteristics of the sample also confirmed the ability to work with the given parameters. The technology looks promising, especially in light of the proliferation of in-memory computing. For neuroprojects it couldn’t be better.

Avni's golden journey is an inspiration for all daughters

Redfall: First images from the alpha of the game Arkane are leaked online