In an unimaginably short time, the Chinese company YMTC prepared and launched the production of the first competitive Chinese semiconductors in the field of NAND flash memory – 128-layer 512-Gbit 3D NAND TLC chips. This is a true masterpiece that surpasses all modern counterparts Samsung, SK Hynix, Micron and Intel. The rapid ramp-up of Chinese NAND production will forever change the global flash memory market and this time is just around the corner. 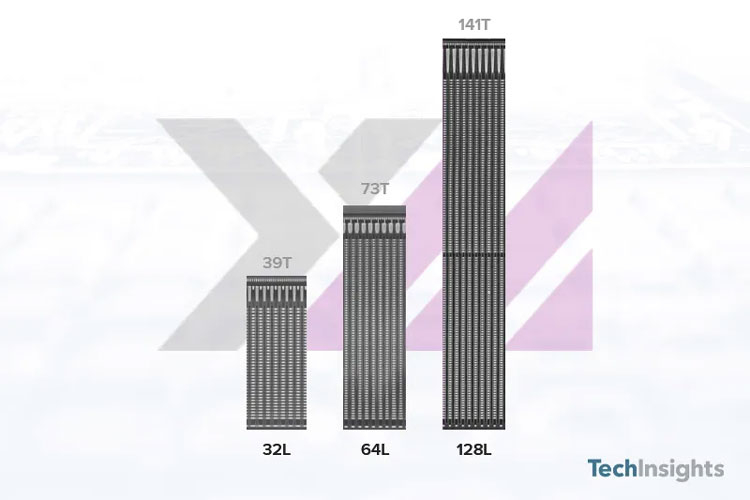 Mass shipments of new chips YMTC began this summer with a delay of about three quarters. According to industry sources, the yield of good chips remains very low – less than 50%. For comparison, the rejection rate for the release of 64-layer 3D NAND TLC from the Chinese is at 15%, which does not reach the ideal range of 5-8%, but very, very good for an absolute beginner. As a reminder, in the summer of 2016, the first 300-mm YMTC plant was just a foundation pit.

YMTC compensates for the high level of scrap in the production of 128-layer NAND chips with a significant production volume, which currently reaches 80 thousand 300 mm wafers per month. By the end of the year, the volume will be increased to 100 thousand 300 mm plates per month and, obviously, the scrap rate will be reduced. Depending on the rate of increase in output and due to the improvement of production, YMTC’s contribution to the global NAND flash market can range from 4% to 8%. Semianalysis analysts, for example, consider the latter option or near it the most likely.

The share of 8% may seem small, but the production of flash memory is extremely inertial, as well as the market (demand) is inertial. If China suddenly finds itself with an unexpectedly large supply of NAND and even completely covers the needs of the domestic market, a “memory winter” will come for global manufacturers of flash chips. To survive in the new conditions, manufacturers will have to consolidate and change their approaches to work. For example, a merger between Kioxia and Western Digital may well take place. By the way, Intel has already evaded responsibility by agreeing to sell the flash business to SK Hynix. 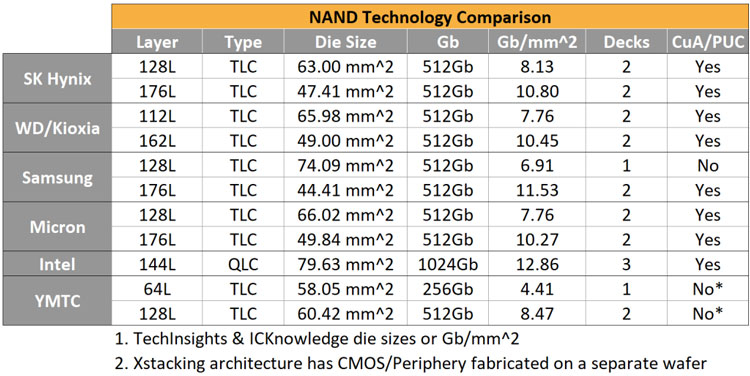 Another wake-up call for the NAND market should be that industrial equipment manufacturers for flash memory are shifting their center of gravity to China from South Korea. In particular, Lam Research is now getting more revenue from China rather than South Korea. Let us emphasize that the two undisputed leaders of the NAND market, Samsung and SK Hynix, no longer invest so much in the purchase of equipment as to be called leaders in capacity development. Now China has taken over this mission.

A few words about the manufacturability of the 128-layer 3D NAND YMTC. Well-known “rippers” of chips – TechInsights – opened the Chinese flash memory and found out that it fully meets the declared characteristics and is noticeably superior to its counterparts. In particular, the bit density of the chip is 8.47 Gb / mm2which is higher than Samsung 128L 512Gbps (6.91Gbps / mm2). In other words, the Chinese have released the densest flash memory for 128-layer structures.

Moreover, they produce technologically more complex memory, since they use two plates ‘gluing’ in production – a combination of an array of NAND cells and control logic. This is somewhat more expensive than the production of logic and NAND arrays on a single substrate, but allows you to quickly move to more and more capacious arrays. This was one of the factors that allowed YMTC to enter the market with a competitive product.

Finally, the financial problems of YMTC’s parent company, Tsinghua Unigroup holding, can only concern stock speculators. The Chinese authorities will not allow the company, which forms the foundation of the national security of the PRC, to go bankrupt. Therefore, by the end of next year, YMTC will commission another plant with a capacity of 100 thousand 300 mm substrates per month and will complete the construction of two more such productions. Another 10 years will pass, and China will reach the level of production of Samsung and SK Hynix. For them and the rest, life will never be the same.

Pokémon: Lucario destroys marriages – according to the community

"Rick and Morty" to get a Halloween horror short