At the moment, lidars (optical radars) on vehicles are found mainly among prototypes, but Lucid is starting mass deliveries of Air electric vehicles, in which the lidar is offered in the older configurations by default, and in the younger ones – as an option. 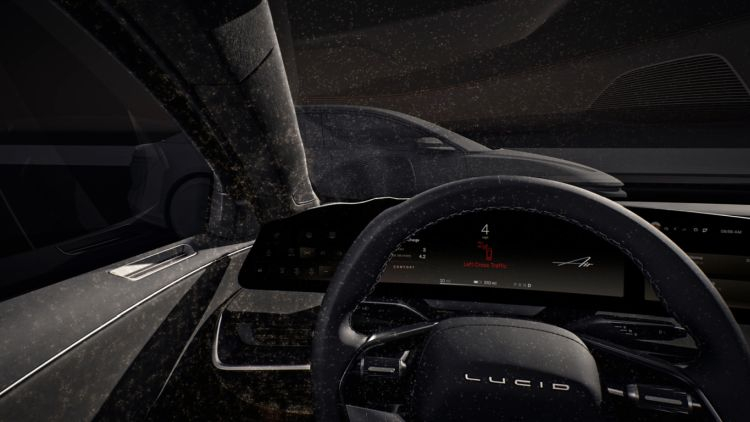 This young American manufacturer of electric vehicles spoke about the capabilities of its DreamDrive Pro system in relation to the presence of lidar in production vehicles of the brand. It is argued that a solid-state lidar controls the situation not only in the direction of the electric vehicle, but also behind it. In cramped urban conditions, it allows you to control literally the entire environment, providing the ability to maneuver among densely parked cars with active support from the automation.

Generally, as noted Electrek, Lucid Air electric vehicles have 32 sensors of different types, which are involved in driving a vehicle. Of this number, 14 are ordinary video cameras, five radars and four all-round cameras are provided. Ultrasonic sensors are also available, and an infrared camera that monitors the driver’s condition is located inside the cabin. The steering wheel is traditionally equipped with sensors that allow you to understand if the driver is holding it. The company hints that in the future it will develop an automatic steering system for highway driving conditions, which will allow you to take your hands off the steering wheel for a while.

Automation is capable of itself slowing down an electric car and stopping it if the driver’s condition does not allow relying on adequate manual control. The default lidar will be used by the two older Lucid Air trim levels, which cost $ 169,000 and $ 139,000, respectively. For the two younger ones, it will be possible to order for a surcharge. It cannot be ruled out that physically the lidar will be present on all copies of the Lucid Air electric vehicle, it is just that only those who have paid for the corresponding option will have access to its use.

Already, the active driver assistance systems Lucid, included in the DreamDrive complex, provide automatic movement of an electric vehicle in traffic jams at a speed of up to 64 km / h. The lane keeping system works even with unreadable road markings. Parking Assistant allows you to almost completely automate this process. The system even takes into account the direction of the slope of the roadway and turns the front wheels in such a way that they rest against the curb and prevent the car from rolling. The first commercial copies of the Lucid Air in the higher trim levels Dream Edition for $ 169,000 and Grand Touring for $ 139,000 will start shipping to customers this month.

Bloomberg: Apple lowered its forecast for the production of iPhone 13 by 10 million units due to lack of components - Aroged

Dwayne Johnson is still at odds with Vin Diesel