The current generation of consoles will soon be one year old, and all the while, fans have been eagerly awaiting Nintendo’s response to the new Sony and Microsoft systems. As the announcement of Switch OLED showed, she responded once again with indifference to the console wars of competitors and loyalty to the principle “the main thing is games, not hardware.” Although the main differences between the new items and the previous model relate precisely to the technical component. This roundup is our first impression of the new Nintendo console. 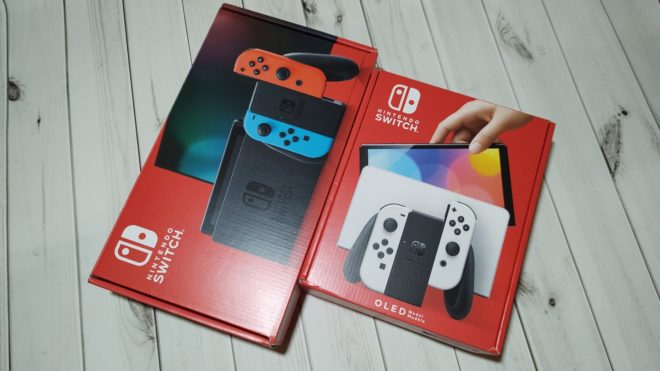 The console was delivered to me in a huge branded package with a smiling Mario, but on the way to me, unfortunately, it broke a little, so I had to put it in a backpack, which turned out very easily, because the box became more compact compared to the standard Switch – by about a quarter shorter and slightly wider with almost the same thickness.

This was achieved by rotating the main console unit 90 degrees and placing the content slightly tighter. All ingenious is simple. The rest of the equipment has remained unchanged: the console itself with two Joy-Con controllers, two “accessories with a strap” for fixing them on the wrist during physically active games, a holder for connecting joycones in the likeness of a gamepad, a docking station, a charger, an HDMI cable. 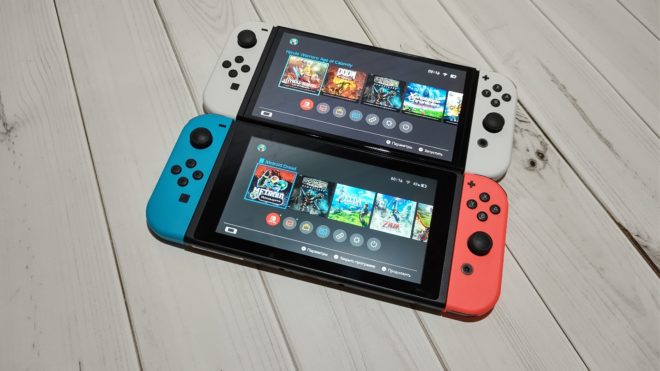 The design of the console is generally identical to the old Switch, but due to the greater attention to such seemingly insignificant details as the shape of the buttons and technical holes, the location of the speakers, the fit of parts with a significant reduction in backlash and the texture of the plastic, the OLED model looks more expensive and a premium device – it is trite to hold it in your hands. At the same time, the joycon and the dock remained completely interchangeable.

The colors I got are stricter – white joycones and a white docking station. For lovers of the classics, there is a version with a black dock and “neon” joycones, red and blue. We will surely see other options in the future, including limited editions dedicated to different games. 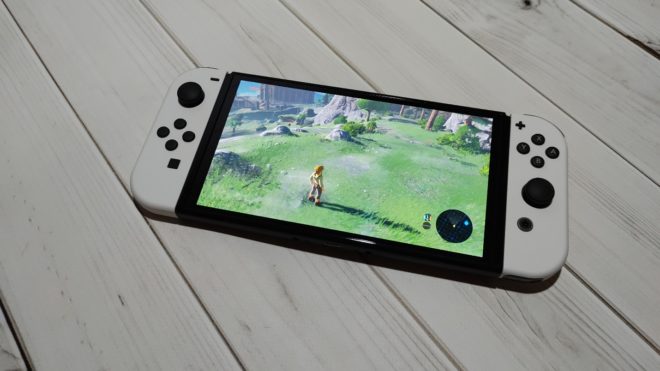 The first thing that struck me about the new Switch, besides the unusual white color, is, of course, the screen. The resolution has remained the same, but it has become noticeably larger, and this is an important plus in itself – literally everything has increased, from the icons of games on the home page to fonts. Naturally thinner steel and bezels, which definitely changed the look of the console for the better. 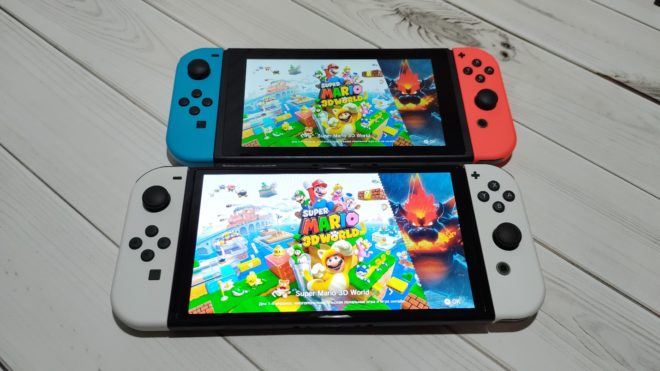 The main advantage of OLED screens is brightness. Unfortunately, I do not have a special device for measuring it, and the gloomy Moscow autumn did not allow me to compare the consoles in the bright sun. But in the photo above, you can see the difference with the naked eye. 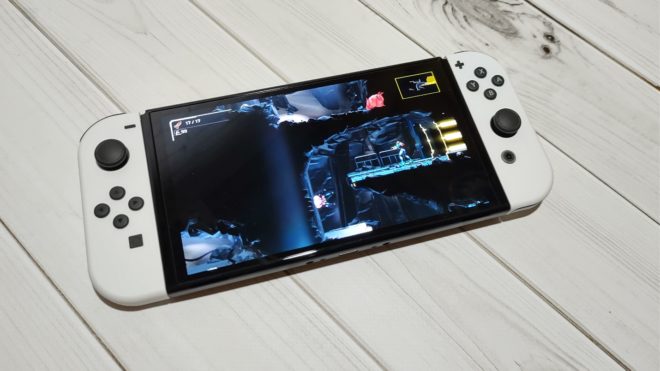 With contrast, everything is also noticeably better – if on the old Switch some places in Metroid Dread seemed impenetrably gloomy, then OLED allows you to see the details well even in the dark. I also liked the colors – they became much more juicy and saturated, and the general gamut shifted towards warm tones, as in the “reading mode” of some smartphones. This is especially noticeable on the branded Nintendo red in the Nintendo Switch Online subscription management app.

By the way, it is worth noting that a paid subscription is required if you want to transfer your game data to the new console, saving them on the old one – otherwise you will not have access to cloud saves. There is also a special utility for transferring the profile, but if you use it on the previous console, it will be deleted. 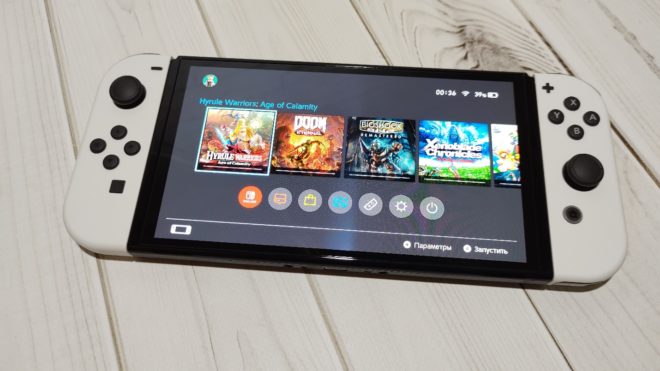 Another important difference – perhaps more important than the new screen – is 64 gigabytes of internal memory. Compared to the terabyte drives of the top-end Xbox and PlayStation, this may cause a condescending smile, but the games for Switch are also much smaller – and, in principle, twice the amount of memory compared to the previous model allows you not even to use an additional memory card. Naturally, if you manage the space wisely and do not try to put a dozen top games at once, which you still cannot play at the same time.

The sound, although announced as updated, subjectively practically did not change. However, I rarely play portable without a headset – especially with the advent of Bluetooth headphone support – and in desktop mode I don’t play at all.

The battery life also remained unchanged and quite sufficient – charged to 100% at 7 am on Tuesday, the console began to swear at a low charge level only on Wednesday evening, while the net game time (I played Metroid Dread) was about 5 hours. So everything corresponds to the stated parameters.

Not a portable single

The stand for playing in tabletop mode has become much better – instead of a small and not very stable leg with the only possible position and the risk of breaking the nail when removed, there is a convenient stand in the entire width of the console, which moves very smoothly and can be fixed at any convenient angle, supplemented by barely noticeable rubber feet on the console body itself. The memory card slot is about the same as before, but now its location has become horizontal.

But the new docking station has become perhaps the only controversial decision Switch OLED. There are no questions about the design – due to the rounded corners and the new texture of the plastic, it has become much prettier, and thanks to the solid rubberized stand, it is much more stable. The functionality has also expanded, but it is not clear why – instead of an internal USB connector, a port for a wired network connection has appeared here.

I would not say that there was any need for it – although USB was not particularly needed in that place either. But why the cover covering the power connector, HDMI-out and the aforementioned network port was made not hinged, as before, but removable, remained a mystery to me. Of course, this is not the most frequently used part, but it was definitely better before.

Take it or not? 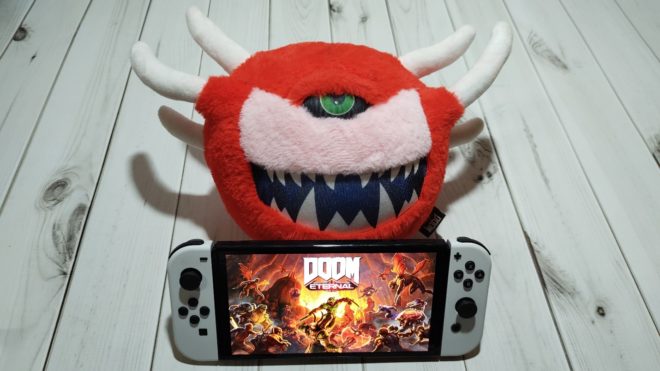 Playing on the new Switch version is much nicer than on the old one. This is especially noticeable when returning back – you experience something similar when reseeding a model from a monitor with a high refresh rate at 60 Hz. And while Switch OLED is definitely an evolution, not a revolution, it is better than its predecessor in literally everything.

As a gamer, I even feel a little offended that the Switch was not made like this from the very beginning, because there were no technical obstacles for this. However, this is quite in the spirit of Nintendo – remember how many 3DS models there were.

And although for those who already have a Switch, the question of whether it is advisable to spend more than 30 thousand rubles (the price is higher than that of Series S!) On albeit indisputably the best, but in general the same console with the same games remains open, then if someone is just going to join the world of Nintendo games, in the absence of strong budget constraints, the choice, in my opinion, is obvious.

complete interchangeability of accessories with the previous model

VTsIOM asks Russians about the ban on the series "Squid Game"