Official sales of electric crossover Mercedes-Benz EQB at the price from 45,5 thousand euros will start in Ukraine – Aroged 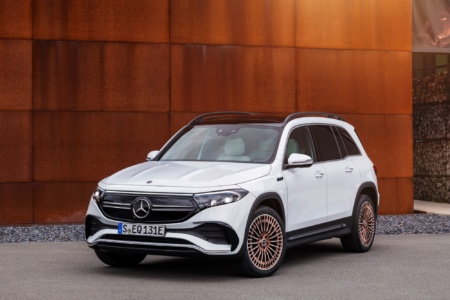 The Mercedes-Benz General Office in Ukraine has announced the start of sales of the new Mercedes-Benz EQB electric crossover. This model will be the brand’s first production car with a fully electric drive, which will be produced at the plant in Kecskemét (Hungary).

At the time of its launch, the compact all-electric SUV will be available in the 168 kW EQB 300 4MATIC and 215 kW EQB 350 4MATIC. The range of each version according to WLTP is 419 km. The cost of the EQB 300 4MATIC and EQB 350 4MATIC is between 45,465 euros and 47,589 euros, respectively. In the future, it is planned to release other options designed to meet the different needs of Ukrainian customers, in particular – versions with a significantly increased margin. They will soon be joined by a front-wheel drive modification of the Mercedes-Benz EQB.

The front axle uses an asynchronous electric motor, a transmission with a fixed gear ratio and differential, a cooling system and electronics, which form a compact module with a high degree of integration – an electric power unit (eATS). The EQB 300 4MATIC and EQB 350 4MATIC have eATS modules mounted on the rear axle with a new permanent magnet synchronous motor.

In the 4MATIC versions, the intelligent power distribution between the front and rear axles is regulated at a frequency of 100 times per second, taking into account the driving conditions. Power consumption is optimized through the use of mainly the rear motor, and in the partial load mode, the asynchronous motor on the front axle generates only minimal friction losses. At idle or during braking, electric motors become generators: their mechanical rotation is converted into electrical energy, which is used to charge a high-voltage battery (recuperation process).

Note that the standard EQB provides five seats, as an option offers a third row of seats, consisting of two additional individual seats. A wide range of safety systems includes retractable head restraints, seat belts with tensioners and tension limiters on all exterior seats, as well as side airbags that protect third-row passengers as well. Up to four child car seats can be installed in the second and third rows, another one in the front passenger seat. To increase the volume of the luggage compartment of the third row, you can fold flush with the floor.

The EQB version complements the Mercedes compact family and is closely linked to two models, the EQA, with which they share common drive technology, and the GLB compact SUV. EQB (length / width / height: 4684/1834/1667 mm) has a larger capacity due to the long wheelbase of the GLB model (2829 mm). The volume of the luggage compartment is from 495 to 1710 liters or from 465 to 1620 liters for the five- and seven-seater versions, respectively. In the standard complete set the inclination of backs of seats of the second row is regulated with a possibility of fixing in several positions, as an option seats with adjustment on length within 140 mm are available.

The EQB model is equipped with a 66.5 kWh lithium-ion battery, which consists of five units and is located under the cabin in the center of the car. The electric crossover can be charged with alternating current with power up to 11 kW, using the onboard charger. The time to full charge depends on the available infrastructure and features of the car’s equipment.

Depending on the charge level (SoC) and the temperature of the high-voltage battery from the corresponding charging station, the EQB can be charged with a power of up to 100 kW. The charging time from 10% to 80% SoC is a little more than 30 minutes. And in just 15 minutes, the energy level is replenished to a level sufficient to cover an additional 150 km (according to WLTP). For AC and DC charging, the EQB model for the European and US markets comes standard with a CCS (Combined Charging System) connector located in the right side panel.

The MacBook Pro with the M1 Pro is already available at a great discount. So cheap new Apple laptops have not yet cost

Apple named the best games and apps of 2021

Galaxy A73: the new design is already on the Internet! He likes?

Warhammer 40,000 Chaos Gate Daemonhunters: new video on the powers of the Bloom plague

Samsung will have given up on the Galaxy Note for 2022

On December 2, Techland will show 15 minutes of Dying Light 2 gameplay