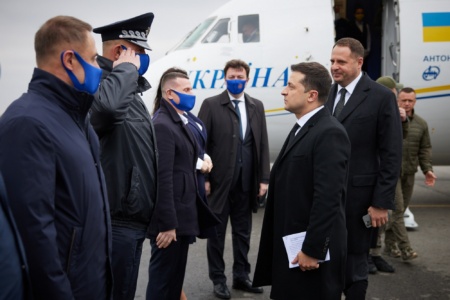 Today, November 25, within the framework of the forum “Big Construction: Aviation and Tourism”, President of Ukraine Volodymyr Zelensky announced the creation of the national Ukrainian airline “Ukrainian National Airlines” (UNA) with the participation of European aircraft company Airbus. A memorandum between the Ministry of Infrastructure of Ukraine and Airbus is expected to be signed today.

“As part of the” Big Construction “program, we are taking a new step, a powerful step that we talked about. We move from promises to practical implementation – this is our national air carrier. Its creation will be officially launched today. There were several working names, today it is Ukrainian national airlines – Ukrainian National Airlines (UNA), very symbolically, “Zelensky said.

In the presence of President Volodymyr Zelensky, a Memorandum of Understanding was signed between the Ministry of Infrastructure of Ukraine and Airbus on the national air carrier. The document was signed by Infrastructure Minister Oleksandr Kubrakov and Airbus Vice President for Europe and Central Asia Kimon Sotiropoulos during the Big Construction: Aviation and Tourism Forum.

The memorandum enshrines the common goal of Ukraine and France – development and cooperation in the field of aviation. The document defines the algorithm for further cooperation of states within the framework of creating a national air carrier, including, but not limited to, the purchase of aircraft. In particular, it is a question of leasing or purchase of 22 planes: six small narrow-body planes (type A220); 12 medium narrow-body aircraft (type A320 / A321); four wide-body aircraft (type A330 / 350).

Kimon Sotiropoulos also noted that the creation of Ukraine’s national air carrier will take place “from scratch”, so you can immediately invest in better technology, in a better fleet that will leave less carbon footprint, consume less fuel and therefore be more environmentally friendly.

“ESupport” is what Zelensky’s initiative to pay UAH 1,000 for vaccination is now called. It will be possible to spend it on books – Aroged

The description of the banner of patch 2.4 was leaked to the network and a new location was shown in Genshin Impact