Hextech Mayhem: A League of Legends Story is next to Ruined King the second title in Riot’s new wave of games from the world of League of Legends. In addition to the big blockbusters Valorant and League of Legends, they should be a supplement and meaningfully expand the LoL universe with additional content.

In the test, we clarify whether the rhythm game Hextech Mayhem around Ziggs and Heimerdinger is worth recommending and whether the actually simple game principle can motivate in the long term.

In Hextech Mayhem we slip into the role of little Yordle Ziggs. Ziggs is a little demolition devil and likes to explode everything around him. After our little friend blew himself into Professor Heimerdinger’s office, he announced that he wanted to build the biggest bomb of all time.

Then he goes straight to the search for components. He ravages the town of Piltover in passing and leads the guards who want to stop him by the nose. The story takes place in the League of Legends universe, but if you are looking for an epic story á la Arcane, you will not have any fun with this game.

The plot belongs more to the “nice to have” category, but it is not disturbing either. Hextech Mayhem prefers to score with other aspects, of course the music.

A feast for the ears or is it cacophony? 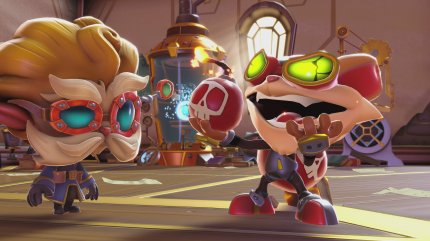 Unsurprisingly, it’s a big part of the gaming experience. We are informed of this directly by the game, as we are advised to use headphones.

A recommendation that we agree with at this point. The music titles themselves are well to very well done, have a rocky character and are without vocals. The riffs of the dominant electric guitar are in the foreground.

Each level has its own piece of music. A repeating melody serves as the leitmotif. It sounds in the course of the adventure in all imaginable forms and variations. Sometimes this makes the tracks sound very similar. Nevertheless, the music didn’t get on our nerves even as the playing time progressed.

Riot Games are known, among other things, for the large number of songs that they have produced especially for their MOBA League of Legends. Unfortunately, none of them can be found in the game, although it would have been so good. One or two bonus songs, such as the song Pop / Stars that is very popular with fans or the Arcane title song Enemy by Imagine Dragons, would have been a great fan service here. Pity! 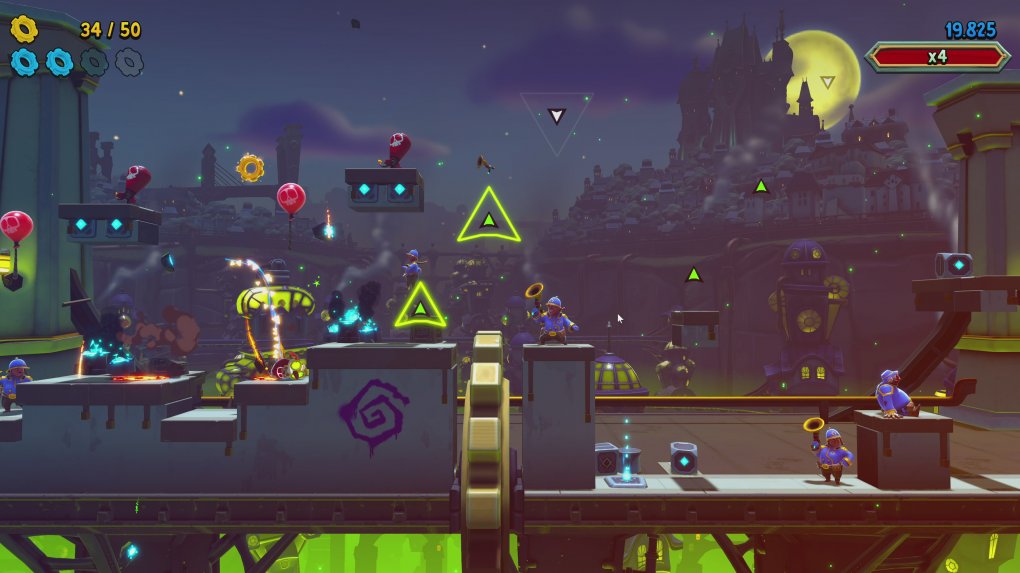 The levels are designed with great attention to detail and the developers have also thought of little things such as graffiti.

Basically, Hextech Mayhem is a typical rhythm game with a very simple gameplay: press the appropriate key at the right moment, matching the symbol on the screen. Yes, we too were skeptical as to whether this could motivate us in the long term. 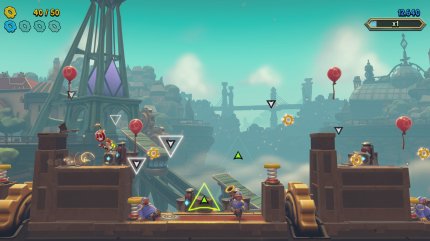 In addition to the symbols that are displayed, we can perform hidden actions, for example to turn off opponents.

Almost like in a side-scrolling game, Ziggs jumps and blasts through the area in front of pretty backgrounds. The world is designed with great attention to detail. This is also reflected in the rare cut scenes.

Unfortunately, we don’t have much time to enjoy the surroundings. Because Hextech Mayhem requires maximum concentration from us, and most of the time one is in the tunnel vision in full expectation for the next symbol. Like many games of this type, the gameplay looks simple, but in practice it is extremely difficult to master if you want to become really good.

Easy to learn, hard to master 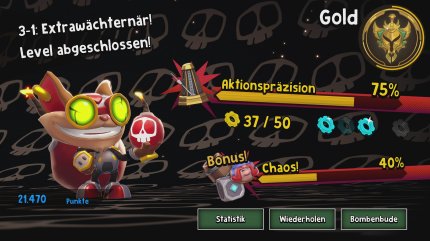 We get bonus points by causing chaos. The more chaos, the higher the rating. Achieving ranks higher than diamond, however, can be tricky.

The learning curve is very balanced and fair. And it’s incredibly satisfying to jump around in time with Ziggs and toss bombs around, especially when what’s happening on the screen is in perfect harmony with the music. This is exactly what Hextech Mayhem is all about, the feel of the game is fantastic.

Then you get out of sync, but then really. Apparently the developers also knew this and have therefore incorporated a feature with which we can recover from errors.

If we press the wrong keys too often and then collide with objects or opponents, we do not have to start the level from the beginning, but only “suspend” temporarily. This system avoids a lot of frustration.

At the end of each round we receive a rating that determines our rank. The ranking system is based – how else could it be – on the MOBA League of Legends. Getting a diamond or better rating is a real challenge.

There is keyboard support on the PC, but the key assignment takes getting used to. After an update you can now change the assignment, but the makers – and we too – recommend using a controller here. This makes the title much more pleasant to play.

But it’s not just about pressing buttons quickly and correctly. The makers came up with a twist that is reminiscent of platformer like Super Mario and is rather untypical for rhythm games.

In each level we can find a certain number of gears. There are normal, blue and silver copies. Each of them is differently difficult to get and has a different function. To advance in the game, we always have to collect a predetermined amount in order to unlock the next level.

This means that we have to play some levels several times to collect more gears. However, that’s not annoying, but rather the opposite. It’s super motivating to see how much better you have become in certain passages.

Insider: Hellblade 2 and Avowed will be at The Game Awards 2021