Scam MMOs: Earth 2 – The cash shop without a game

It is every video gamer’s dream: the entire earth can be walked on on a scale of 1: 1, simulated right down to the individual petals. Do you want to hike the entire Camino de Santiago without leaving your home? No problem. Has it always been your dearest wish to travel the Silk Road? Then get started! And the best of all: You don’t necessarily have to experience your adventure in disdainful 2D. Anyone who owns VR glasses can travel, change and experience the familiar world – in full, glorious 3D and without any loading times. Is your computer a little older? No problem either, because through revolutionary programming skills, even weaker computers can easily show you the full scope of the game.

And now comes the Super Duper Bonus: You can earn money with it! Yes, real money. You only have to buy one of the fields on Earth2.io and you own the Pentagon, the Pyramids of Giza or all of Frankfurt. On the land you have acquired, you can then build houses, produce resources and, in the end, do what you want. Grab the best locations today, sell them to other players for real money, and be enough! You better have a look right away, because you don’t want anyone to buy your own house. Oh, and we heard the Eiffel Tower is available for purchase too. Disclaimer: Currently only the virtual land can be purchased, all other features will follow “soon” ™. Secure your country today, because you don’t want to be left behind when it starts … do you?

Earth 2 even puts Dreamworld in the shade in terms of its ambitions. We’ll tell you why you should be very, very careful before investing money in the project.

Are your skulls already buzzing? Good, because the promises on Earth2.io read like a checklist for “Ready Player One” for seasoned video game veterans: A precise replica of the earth that is populated by players who put real money into the game and earn real money with it. Earth 2 is supposed to represent the beginning of the so-called Metaverse, the cornerstone of OASIS penned by Ernest Cline; in a sense a parallel dimension to our physical reality. Now it gets interesting, because the next detail in particular causes our fraud alarm sirens to wail: At the moment there is no game at all.

On Earth2.io you can only buy 10×10 m diameter tiles on a replica of the earth from Google Maps for real money, which should be habitable by you later in the game. The highlight: You can trade the tiles with other players for real money and display your national flag on them. To put it bluntly: Even the extremely suspicious Dreamworld project, which we dealt with in a separate article, at least offers its players something to play with. At the time of this article, Earth 2 has existed for a year exclusively as a cash shop and a platform on which virtual land can be traded for real money – the value of which is explicitly determined by the provider and which can change without prior explanation or warning.

If the whole thing reminds you extremely strongly of an advance fraud, you are not the only ones. In this article we are spreading out before you all of the information we could find about Earth 2. To do this, we will first deal with the professional background of the founder Shane Isaac and his company, explain the exact functioning of Earth 2 and its monetization, and then show which problems we see in this concept. If you would like to find out more about Earth 2 after reading this article, we strongly recommend the videos by YouTubers KiraTV, Josh Strife Hayes and Callum Upton, whose work makes a valuable contribution to uncovering scams in the video game industry.

A warning in advance: This article is extremely long, because Earth 2 is a highly complex topic that easily outshines even notorious titles like Dreamworld. Brew you a calming hot drink and make yourself comfortable. This is going to take a while.

The founder of Earth 2: Shane Isaac and his company

If you are faced with the decision to put your hard-earned cash into an early access game, it is always worth doing a little research. The first look should be at the founder and the team behind him – and in the case of Earth 2, it will be very interesting. At first glance, the founder Shane Isaac seems to be well suited to tackle such a mammoth project: “Over 20 years of experience in development, product development and management” is a strong recommendation! Attentive observers will notice, however, that this statement is very general. In the sales area, such statements are often referred to as the “trust me statement”, which gives the customer a good feeling without putting hard facts on the table.

A look at his LinkedIn profile reveals that it was only created a few months before the Earth2.io website went online. In addition, there are only two entries here: Managing Director of XYZ Social Media since 2016 and CEO of Earth 2 since 2020. The id.XYZ app offers its users chat, calls, some augmented reality features and a social media platform, but does not seem to have any way of removing his account information afterwards. If we switch to the app’s website, we are informed that a secure connection cannot be established. Neither the website nor the Facebook profile of id.xyz Pty Ltd seem up-to-date.

Shane Isaac keeps appearing in blurry videos promoting Earth 2. It is important to mention that he has no experience in the video game sector or in such titanic project management.

Shane’s professional career prior to 2016 is not even listed on LinkedIn, which is not a good sign for the founder of such a mammoth project. The third project that we were able to connect with Shane Isaac is also not listed on LinkedIn: a patent that was registered by TipeME Holdings Pty Ltd and which obviously relates to an app that can encrypt user data on a smartphone. If you are wondering what all this has to do with online games and the construction of the metaverse: nothing. None of these endeavors will help Shane create an MMO of revolutionary size. In fact, we can’t find anything that even vaguely suggests that Shane had any previous experience in the game development sector.

If we research a little further, it becomes extremely interesting: In contrast to Dreamworld, Earth 2 has an actual team of at least 18 employees. Including for example Dillon Seo, one of the co-founders of Oculus! Wolfgang Walk, who is on the jury of the German Developer Award and regularly contributes to The Pod, also worked on the project, but is no longer part of the Earth 2 team.

Uff, these are really big names – so is it safe to invest in Earth 2? The answer to that is a resounding no, as there are some facts about the Earth 2 employees that are causing the alarm to potential investors: First, while 18 people are better than the four Dreamworld employees; but they are nowhere near enough to get the promised project off the ground.

As a little reality check: We are talking about the 1: 1 implementation of planet earth, optionally also in VR. Second, half of the employees work as “security guards” or “consultants”, according to Earth2.io, including Wolfgang Walk and Dillon Seo. In Earth 2 there are only eight (in numbers: 8!) Actual programmers and game designers. These also come almost exclusively from the indie developer company “Five Studios” and do not even continuously list their employment at Earth 2 in their LinkedIn profile. As a reminder: the project has been in progress for almost a year. 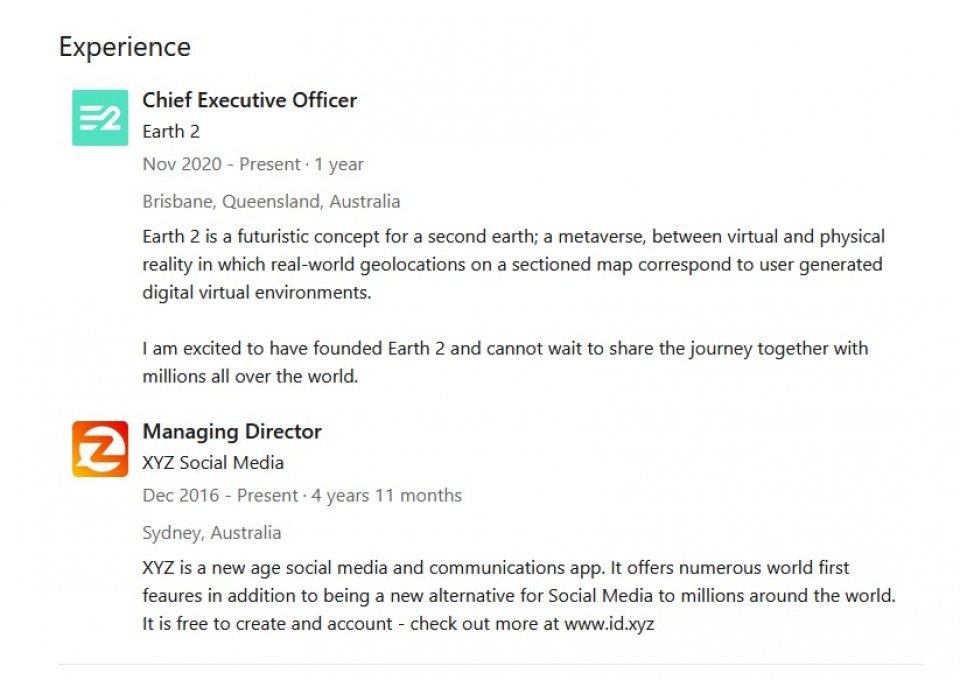 Shane’s LinkedIn profile shows us very little of his “over 20 years of experience in development, product development and management” – after 2016 it will be over.

Five Studios itself is made up of employees who work from Poland, Spain and Austria; The developer company does not own an office building as such. This is no longer absolutely necessary nowadays, but it shows you the small size of the studio very effectively. The only game from Five Studios so far is DRONE, a Unity-based arena shooter in which the player can assemble their own drones. The graphics are very good for an indie game and the modular construction of the drones also seems to be fun, as the “mostly positive” reviews prove. If you look at the latest reviews, however, they are “very negative” because the developers have not given any updates or signs of life for more than a year. Coincidentally, that’s pretty much exactly when Earth 2 appeared on the scene. We summarize: The Metaverse is created by a small indie team that so far has a half-finished Unity game in its portfolio. If you ask us: rather unlikely. 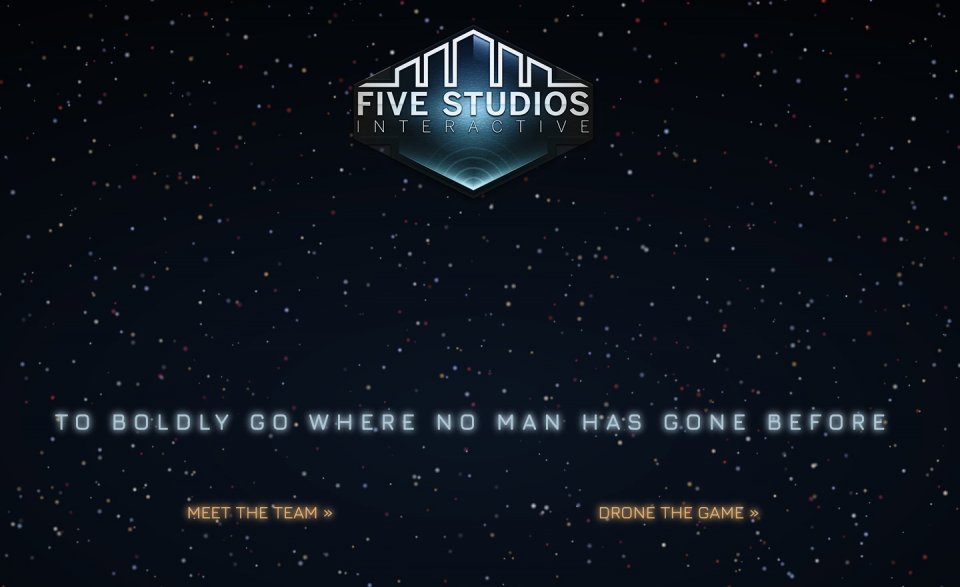 The actual developers behind Earth 2 are Five Studios, who so far have only published an unfinished Early Access title on Steam. DRONE Based on the Unity Eninge and looks good – whether that’s enough to create the metaverse with a dozen programmers is questionable.

God of War: PC version is delighting players on Steam

Gameplay video of the Switch version of the RPG Labyrinth Legend

Media: Google is working on a smartwatch codenamed Rohan