The rogue-like platformer Firegirl: Hack ‘n Splash Rescue attracts with an interesting setting that allows you to master the profession of a firefighter, and a story about fiery monsters besieging the city. However, the chances are that you will not make it to the end of the story. We will tell you in the review what is wrong with the game.

In the center of the plot Firegirl: Hack ‘n Splash Rescue is a young girl who joined the city fire department. Her father was also a firefighter, and a few years ago he died in the service.

The heroine decided to follow in his footsteps, having mastered a difficult and dangerous profession – as it turned out, very in time: fires break out in the city here and there, and it soon becomes clear that behind them is a supernatural monster that literally revives the flames. Together with the girl, the player will have to get to the bottom of what is happening, until the metropolis disappeared in the fire. 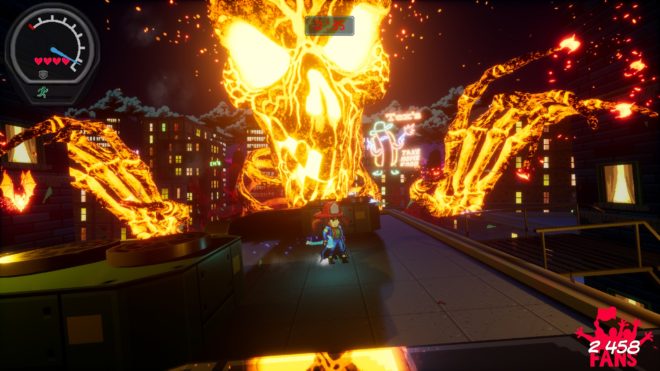 Using procedural level generation, the game offers three types of missions: putting out fires in a multi-story building, chasing a burning train, and exploring a cave in flames. Each time Firegirl: Hack ‘n Splash Rescue randomly assembles a location from prepared parts, but this does not benefit the gameplay: on the contrary, you have to wander through the mazes, competing with the time limit.

You can extend the timer if you extinguish the fire and find the clock at the level, however, the three minutes allotted for the task is often not enough: you need to find the people trapped in the fire trap and find a way out, which is not so easy to do – there is no card, but in The passed rooms cannot be returned, as they are blocked by a flame that cannot be extinguished. 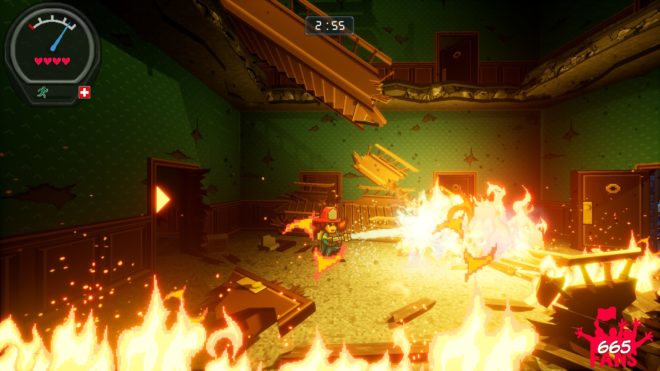 Many of my races ended with a trip to the hospital: there was not enough time to complete the level, the character was burned too often, or there was a fall from a height. The latter is a constant companion of races on the cars of a moving train: if you do not calculate the strength and distance of the jump into the next car, the girl will fall on the rails. She does not die, but the mission will have to be repeated.

The heroine is armed with an ax and a fire hose: the first knocks down the locked doors and destroys the rubble (and if you buy an ice ax, you can extinguish the fire with it), the second extinguishes the flame and allows you to fly up, using a stream of water as a jet accelerator. This is useful in the city, where you often have to move vertically, between the floors of a building, and also fly from roof to roof. 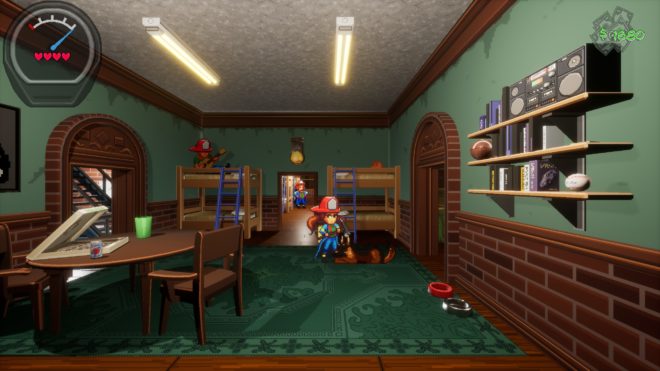 You literally have to fight with fire, as the flame takes the form of monsters. At first, the fire department’s tools are very weak, but very soon opportunities for pumping them open up: you can buy a health boost, increase the water pressure, and even make fans pay more for the successful completion of missions – yes, the girl has fans who follow her work and bring hard coin. A strange decision in the context of the setting, but perhaps in the world of Firegirl: Hack ‘n Splash Rescue, firefighters are in the status of rock stars and enjoy popular love.

In addition, some of the rescued characters take up space in the lot, offering their services – mainly selling equipment and upgrades. They don’t work for free, so you have to work hard to get good upgrades. And also perform additional tasks, such as rescuing kittens, for which the heroine is awarded with badges – being pinned to the suit, they give passive bonuses. 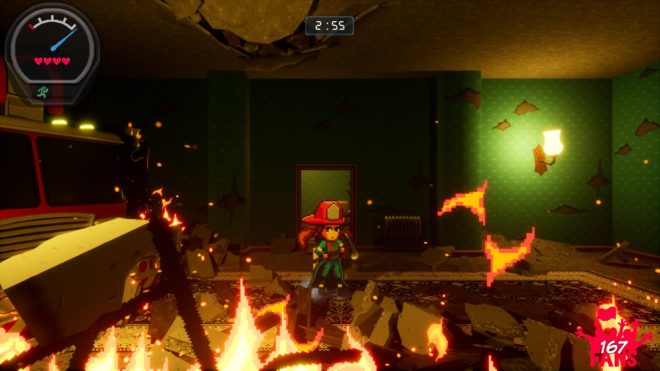 From Firegirl: Hack ‘n Splash Rescue, I wanted something more than a procedurally generated roguelike with boring, repetitive levels and overpowered difficulty. There is a plot in the game, but he does not keep the intrigue for a long time and rather quickly lays out the cards on the table. The picture is beautiful, but bugs are common, and there are problems with the readability of the foreground and background. The gameplay lacks addictiveness, and there is not enough motivation for the player. It’s not a bad game, but it’s far from a masterpiece. Mediocre project, which I don’t want to get to the final.

Little motivation to move to the final

A lot of bugs