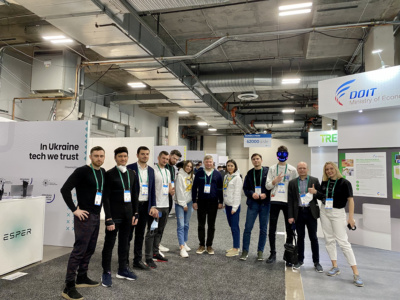 For the first time, 8 Ukrainian startups selected by the Ukrainian Startup Fund (USF) are taking part in the largest consumer electronics show CES 2022, which again takes place offline from January 5 to 7 in Las Vegas and brings together more than 2,000 companies.

Startups were given the opportunity to present their projects at the largest technology exhibition CES through a competition of the Ukrainian Startup Fund (USF). Initially, about 100 projects participated in the USF selection, 17 of which were selected for pitching. In September, the USF announced the names of 8 winners who had been selected to participate in CES 2022.

Esper Bionics – robotic bone prosthesis, which can significantly improve the lives of people with disabilities. Esper founder Dmitry Gazda created the startup, inspired by a friendship with a girl who lost her arm after a car accident. This story was the beginning of the creation of the bionic prosthesis of the hand.
Effa – Organic toothbrush, which consists of paper, cornstarch and nylon bristles, so it is completely recycled.
ComebackMobility – a smart sensor on a crutch, which through sensors monitors and records the load on the body in the program. This helps speed up the recovery process, reduce the risk of complications and prevent re-injury.
Unlink VR – a virtual reality helmet that uses laser beams instead of wires, which allow you to play without restricting your movements and without worrying about touching something.
Manna – Developers use a smartphone, body sensors and modern 6DoF-navigation to create a personalized animated user avatar for the metaverse. According to the authors, the avatar can move to different locations, communicate with other people’s avatars, like them, share content with Manna on social networks.
Neverdark – biofireplace with real fire, but without smoke and smell. The new representative of the “smart” house is refilled with special cartridges and allows you to choose a comfortable level of flame.
Cardiome – sensor for early diagnosis and prevention of cardiovascular disease. The device is attached to the heart with a special patch with a sensor. With its help, the doctor and relatives of the user can monitor the ECG, heart rate and respiration, sleep quality through the mobile application. In emergencies, the gadget even sends SOS alerts to relatives and doctors.
Qudi – the world’s first emotional LED mask. It depicts the movement of the lips during a conversation and broadcasts the speaker’s emotion using a base of 6 built-in emotions. You can choose emojis or images to be broadcast on the mask via Bluetooth and the application.

For 2022, the Foundation has planned a global road show for Ukrainian startups around the world. Among the points of this route are London Tech Week, Expo 2020 in Dubai and Web Summit in Lisbon.

USF appeared in 2019. The purpose of the fund is to support and stimulate the growth of Ukrainian technology startups. The Ukrainian Foundation for Startups issues grants and finances the training of projects in national and international accelerators.

Infographics with statistics on USF activities for two years

In two years, USF has conducted 35 pitching, organized more than 30 professional events and funded more than 240 startups worth $ 6,300,000.

TCL Flex V - a clamshell with a flexible screen for $ 600