The preload can be started shortly before the launch of “God of War” on the PC. The developers announced the exact time on Twitter.

A “God of War” for PC systems could still sound strange to one or the other PlayStation player. But the fact remains: The Kratos title will conquer the arithmetic servant this month.

It will be published on Steam and the Epic Games Store. And all players who do not want to spend unnecessary time downloading on the release day can start the preload from today. On the Twitter channel of the studio, Sony Santa Monica published the exact time.

The preload of “God of War” will therefore start on Wednesday, January 12th, 2022 at 5 p.m. our time. With the download you can load all files necessary to start the game onto the hard drive or SSD of the PC and start on the day of the release of “God of War” without waiting.

The system requirements of “God of War” indicate that the title has a size of 70 GB. It should be noted that an SSD is recommended for using the Kratos game. An HDD only appears in the minimal specs. In the following we have again embedded the graphic for the PC system requirements. 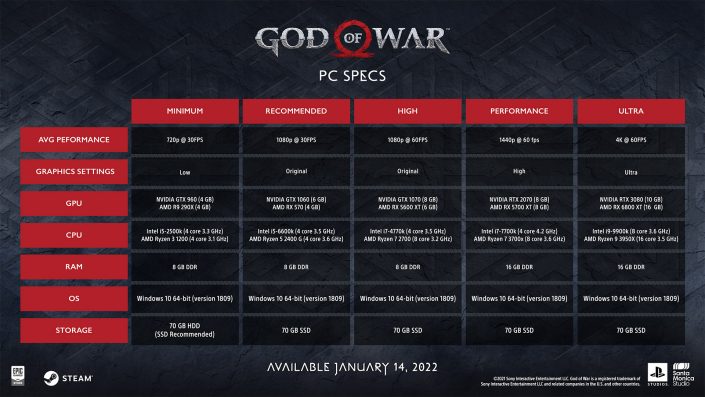 At least you have to have a graphics card of the order of size Nvidia GTX 960 or AMD R9 290X with 4 GB each installed in your PC. At least one CPU with the performance of an Intel i5-2500k or AMD Ryzen 3 1200 as well as 8 GB DDR-RAM are required. In addition, the use of Windows 10 with 64 bit is a basic requirement. With it you can play “God of War” with 720p at 30 FPS and minimal graphics settings.

There are several further levels up to Ultra: If you can meet the requirements, you play “God of War” in this case with the Ultra settings and 4K at 60 FPS. However, you need at least an Nvidia RTX 3080 with 10 GB or an AMD RX 6800 XT with 16 GB. In the CPU column, the processors Intel i9-9900k and AMD Ryzen 9 3950X are mentioned with certain performance values. It should also be 16 GB DDR RAM.

More news about God of War in the overview:

The PC version of “God of War” will be released on January 14th, 2022. That is the coming Friday. Pre-orders are already possible on Steam. When you buy you will with around 50 euros to the cash register asked. Likewise from the Epic Games Store you can refer to the title. The price is the same. Details on the other special features of the PC version of “God of War” can be found in her a previous message.

More news about God of War.

Karate Kid: Sony would be working on a reboot, for a rumor

Manufacturers of expensive gadgets complain about falling demand, but see a way out in price gouging