Micron Technology has expanded its solid state drive portfolio with the 2400 series, which includes 30mm, 42mm and 80mm M.2 SSDs. All of them are equipped with PCI Express 4.0 x4 interface, use 176-layer 3D NAND QLC memory chips and will be offered in 512 GB, 1 TB and 2 TB versions.

For NVMe-drives Micron 2400 declared sequential read speeds up to 4500 MB / s and write up to 4000 MB / s. The performance level when working with arbitrary blocks reaches 650 thousand / 700 thousand IOPS (read / write), and the TBW (Total Bytes Written) indicator ranges from 150 to 600 TB, depending on the capacity of the drive. More detailed characteristics of new products are shown in the table below. 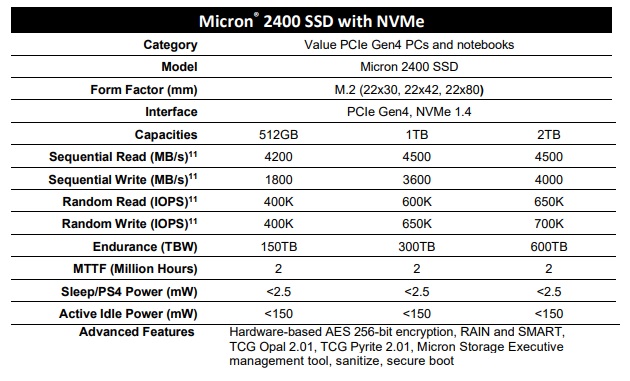 The recommended prices for the Micron 2400 SSD have not yet been announced. Note that M.2 2230 format devices will certainly be in demand among future owners of the Steam Deck portable game console.

In the Minecraft Bedrock beta, frogs ate goats. There will be no more