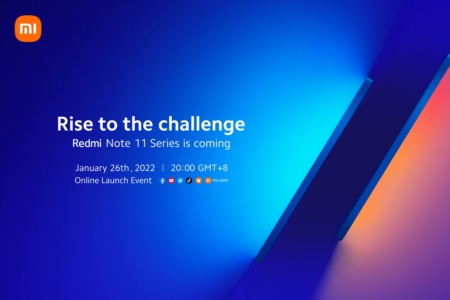 Xiaomi revealed the date of the presentation of the budget series of Redmi Note 11 smartphones by posting an invitation on social networks – it will be held online on January 26.

The rest of the specifications of the Redmi Note 11 4G global version are expected to remain unchanged: 6.5-inch FullHD + LCD screen at 90Hz, triple camera with 50MP main module, 8MP selfie camera, stereo speakers, fingerprint scanner fingers on the side, a 5,000 mAh battery with 18W charging and MIUI 12.5 based on Android 11. According to preliminary data, in Europe, Redmi Note 11 4G prices start at 250 euros for the 4/64 GB variant; there will also be a 4/128 GB version for 290 euros and an 8/128 GB variant for 330 euros.

It was previously reported that the Poco X4 NFC model (an upgrade of the popular 2020 Poco X3 NFC model), whose announcement is now expected in the coming months, will be renamed Redmi Note 11 Pro. So among the existing models, there is still Redmi Note 11 Pro +.

Xiaomi’s online presentation dedicated to the release of Redmi Note 11 in Europe will be held on January 26 at 14:00 Kyiv time.

Microsoft + Activision, patience is needed: it could take up to 18 months