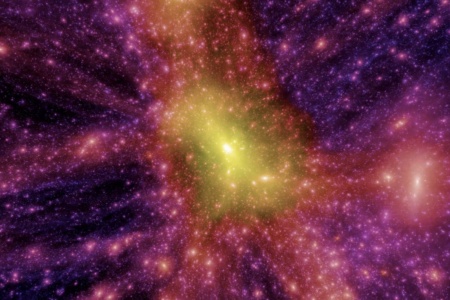 Scientists have created the largest and most accurate virtual image of the local part of the Universe to date, along with dark matter. An international team of researchers led by the University of Helsinki, including staff from the University of Durham in the UK, used the DiRAC COSmology MAchine (COSMA) supercomputer to simulate and recreate the evolution of the cosmos from the Big Bang to the present day. The results of their work are accepted by the journal Monthly Notices of the Royal Astronomical Society.

The simulation is called SIBELIUS-DARK because it is part of the Simulations Beyond the Local Universe or SIBELIUS project. The simulation covers a distance of up to 600 million light-years from Earth and is represented by more than 130 billion “pieces” occupying a petabyte of data.

Our local universe simulation includes familiar structures, including the Virgo, Coma, and Perseus galaxy clusters, the CfA2 Great Wall, and the Local Void. At the heart of the simulation are virtual counterparts of our own Milky Way and the nearby massive Andromeda galaxy.

At the very center of the simulation (and our own universe) is the Milky Way galaxy and our nearest massive neighbor, the Andromeda galaxy (known as M31). Photo: Dr Stuart McAlpine

“This project provides an important bridge between decades of theory and astronomical observation,” said Dr. Stuart McAlpine, a research fellow at the University of Helsinki.

Appropriate physical equations were used to describe how dark matter and cosmic gas evolve throughout the life of the universe. The researchers applied advanced statistical techniques so that the simulation could recreate our local region of space, including the correct location and properties of virtual counterparts of familiar structures.

“It’s very interesting to see the familiar structures that exist around us, resulting from computer calculations… The simulation simply reveals the consequences of the laws of physics acting on dark matter and cosmic gas during the 13.7 billion years that our universe has existed. The fact that we were able to reproduce these familiar structures provides impressive support for the standard model of cold dark matter. So we are on the right track to understand the evolution of the entire universe.” said Carlos Frank, Professor of Fundamental Studies from the Institute for Computational Cosmology, Durham University.

An international research team will continue to analyze the simulation to test the Standard Cosmology Model (ΛCDM), a cold dark matter model.

An assumed type of dark matter, the particles of which move slowly compared to the speed of light (the concept of “cold” in this model) and weakly interact with ordinary matter and electromagnetic radiation. In the theory of cold dark matter, the growth of structures occurs hierarchically, and objects on small scales are the first to collapse under the influence of self-gravity and merge within the framework of a continuous hierarchical structure with the formation of more massive structures. Although the detected insufficient density is not considered a challenge to the standard model of cosmology, it may affect how information about the study of observed galaxies is interpreted.

Atelier Sophie 2: the explosive return of the Koei Tecmo and Gust series

Family: the first shots of the continuation of "Fear the walking dead"