The Badoo website has stopped opening in Russia and Belarus, but you can still get acquainted

Bumble, the owner of the dating service Badoo, has implemented the intention that it announced in early March – website stopped opening in Russia and Belarus. Both the desktop and mobile versions of the site do not work, but the basic functions of the services remain available in mobile applications. 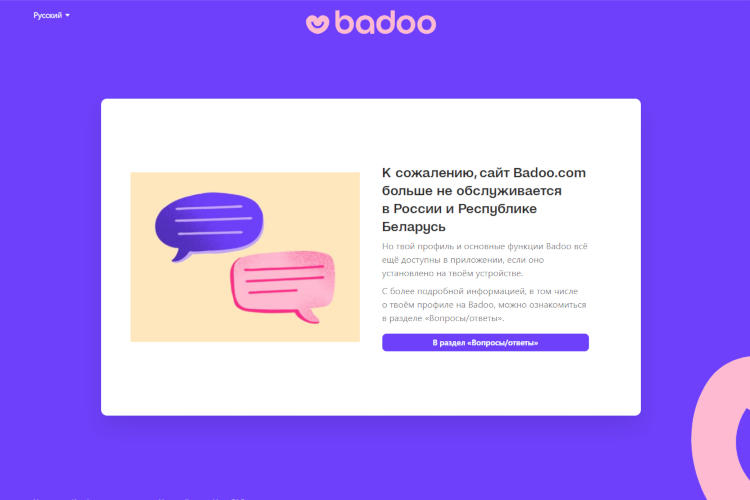 Owning services Badoo, Bumble and Fruitz, Bumble previously announced its withdrawal from Russia, Belarus and Ukraine – these three countries brought the company 2.8% of revenue last year. In addition to disabling the web interface, applications were removed from the App Store and Google Play stores for users from Russia and Belarus, and the subscription was canceled, although Apple gadget owners are advised to disable it manually.

After the removal of applications from the largest stores, updates will no longer come, and it will no longer be possible to register in dating services – only owners of existing accounts with gadgets on which applications are already installed will be able to use the services. All collected likes and likes will be saved, however, access to premium features will be lost, and dating will remain available only within the already registered audience, which will not expand now.

At RBC remindedthat, according to the results of a study of the dating services market conducted last January, Badoo ranked second in terms of the number of unique users per month, second only to OK.RU, and third in terms of spending, skipping ahead Tinder and again OK.RU.

AMD will have a new ultra-budget card, the Radeon RX 6300