Sonic the Hedgehog 2: Interview with Julien Bam as Sonic

Julien Bam is one of the German YouTubers with the widest reach and is known for self-produced music videos and short films. While Sonic the Hedgehog isn’t Julien’s new start in voice acting, it’s by far the biggest role he’s likely to voice to date.

In the interview, we ask him questions about how he got the role and what challenges he faced. In addition to personal anecdotes, there is also a small insight into the work as a career changer in the industry. Of course, Julien also has an opinion on the portrayal of Sonic’s personality and who should watch the film and its sequel.


After the end of Part 2, fans of Sonic the Hedgehog will find out directly how the film series about the blue hedgehog will continue.


With the OMEN 45L, HP delivers a complete computer with maximum performance for the most demanding gamers, thanks to the Intel i9-12900KF and RTX 3090.

PC Games: How did you come to be Sonic?

Julien: We got this request, I was in a snack bar with my manager, that’s when this call came in and I, of course, cheered straight away and called into the phone “I’ll do it for free!” simply because I thought it was so cool. After that there was another casting, I was able to use a bit of what I had learned from my own main video productions over the last few years, I also had a lot to do with ADR (subsequent recording of dialogue).

PC Games: How much time did you have to settle into the role?

Julien: It started straight away, we watched the unfinished film first. One wonders how the text should fit the mouth movement? In the unfinished state there was hardly any movement and some places were still animated with what felt like five frames per second. It was quite a challenge. Of course we talked a lot with the director and the editor, but in the end we just got going.

PC Games: Your experience is more in production than dubbing, did you have the chance to get involved in localization?

Julien: Not at all, zero. I would have hated to have the responsibility of having to cut the trailer or say that this or any other scene was better. I’d rather let them do that.

PC Games: Between the first and the second part, what were the biggest differences for you? 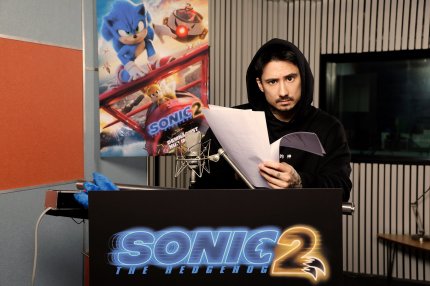 Julien: I had less of a challenge than the first installment, I knew how Sonic was supposed to sound and I also got more involved with the synchro acting and was better prepared.

PC Games: You used to play the Sonic games, do you think the personality of Sonic in the movies suits him?

Julien: When I think of Sonic I remember the days in Singapore on the old Sega where I had to blow through the cartridges to get all the ants out! Although I never imagined Sonic like this, he fits perfectly.

PC Games: Would you say you can identify with Sonic?

Julien: Yes, maybe when I was younger and the fastest in elementary school. But I think that with so much euphoria and so much thirst for adventure, whoever can identify with it is definitely very crass.

PC Games: Who would you recommend to watch the film?

Julien: Each! People my age who had touchpoints with Sonic, or even younger. I can’t imagine anyone having such a different idea of ​​Sonic and being so insistent that Sonic has to be like that, that that person wouldn’t enjoy the film. Then of course the younger ones, too, because the film is great fun, the jokes are good, it’s a great adventure, but also for older people, because the humor is also aimed at them.

Dying Light 2: Bloody Ties shows up in teaser trailer ahead of Gamescom reveal

Chris Pine: I wouldn't try to compete with Marvel, but just make an inexpensive movie for Star Trek fans