ASUS today introduced five new laptops in the Zenbook series. Some of the novelties are equipped with two screens, some offer ergonomic keyboards and more advanced cooling systems. However, the key feature of all models is the new AMD and Intel processors. The manufacturer did not announce the exact start date for sales of laptops, but indicated that they would arrive at retail sometime soon. 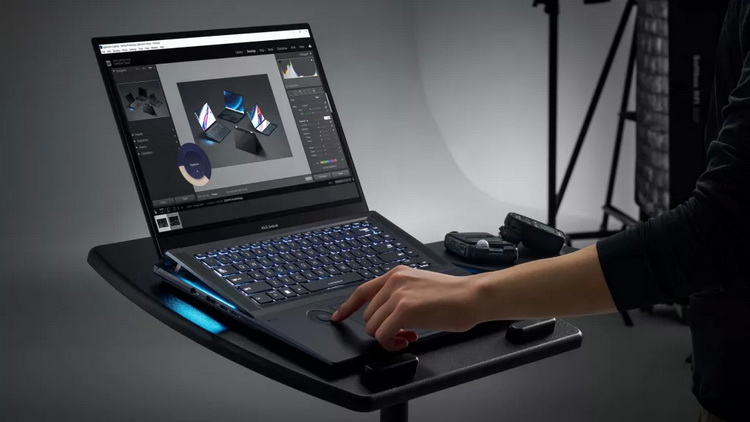 Updated model ASUS ZenBook 14 Duo OLED (UX8402) received thinner frames of the second auxiliary display compared to its predecessor. The device is equipped with 12th generation Intel Core processors and is ready to offer up to a 14-core Core i9-12900H model. Graphics processing is handled by a discrete GeForce RTX 3050 Ti. ASUS also offers up to 32GB of RAM and up to 2TB SSD for the laptop. 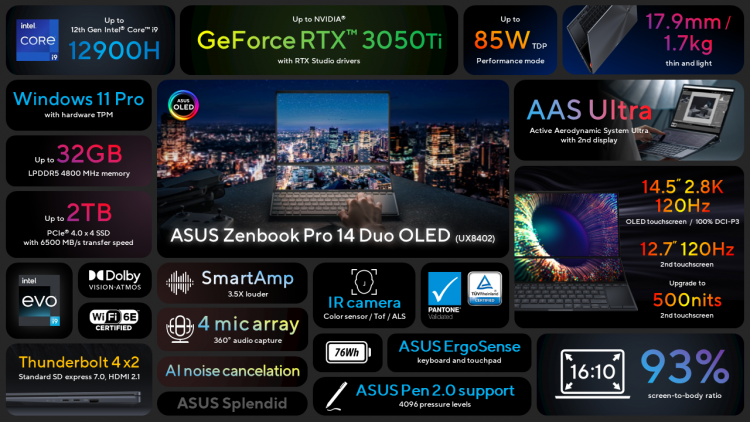 The laptop is equipped with an AAS Ultra mechanism that raises the optional 12.7-inch ScreenPad Plus display by 12 degrees, which provides additional fresh air to the internal components and the cooling system, which includes, among other things, two 8mm heat pipes. According to the manufacturer, this increases the efficiency of removing hot air from the system by up to 38% compared to the previous ASUS Zenbook 14 Duo model, which allows for more efficient distribution of 85 watts of power consumption between the CPU and GPU. 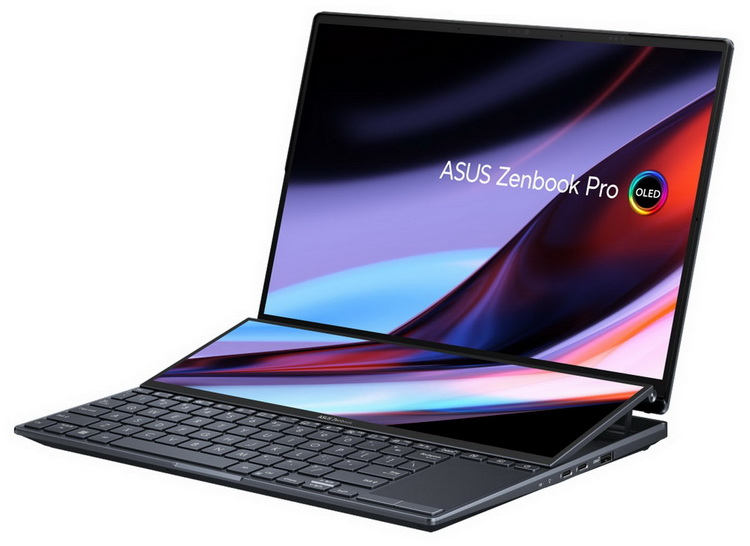 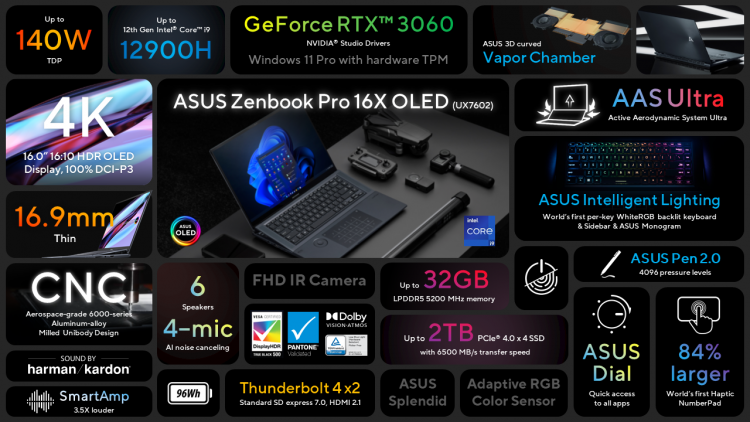 For creative individuals who prefer a more classic laptop look, ASUS offers a model Zenbook Pro 16X OLED. It also has a number of features, and also offers a more productive stuffing.

The laptop is also equipped with Alder Lake-H processors and is ready to offer a choice in favor of the 14-core Core i9-12900H. The mobile GeForce RTX 3060 is responsible for the graphics here. The total power consumption of the CPU and GPU is 140 watts. The manufacturer can equip the laptop with 32 GB of RAM and a solid state drive up to 2 TB. 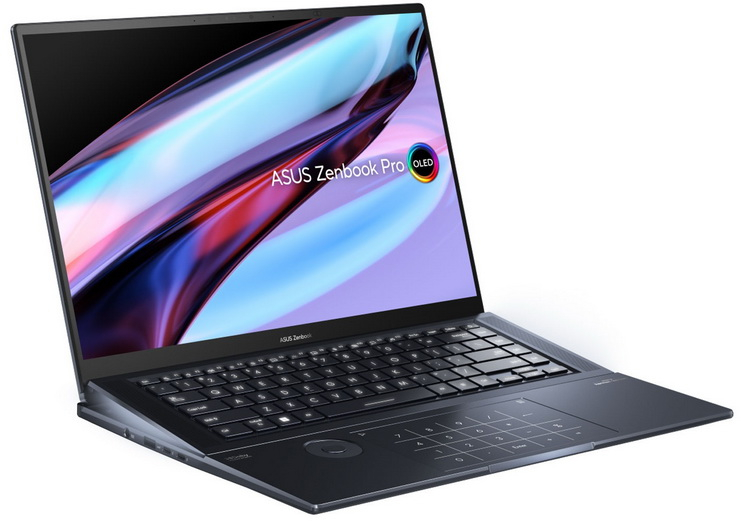 The novelty has only one screen, but is also equipped with the AAS Ultra mechanism, which raises the top of the keyboard at an ergonomic angle and provides an additional outlet for hot air from the system. ASUS claims up to 30% more efficient cooling for the Zenbook Pro 16X OLED compared to the previous generation of the laptop.

Now to the features. The laptop keyboard is equipped with a control wheel. Its thickness is only 3.2 mm. The manipulator is useful for working in various applications. For example, it can be used to quickly change brush thickness in Adobe applications. The touchpad of the laptop has also increased in size compared to the previous model. In addition, it is endowed with a feedback function. 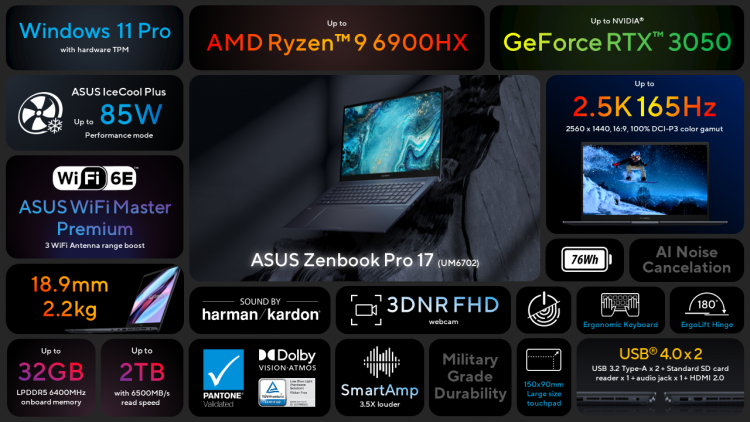 With the exception of the Zenbook 17 Fold OLED hybrid foldable with a huge touch screen, presented at CES 2022 earlier this year, the model ASUS Zenbook Pro 17 (UM6702) is the first classic Zenbook with a 17-inch display. The latter has an aspect ratio of 16:9, supports a resolution of 2560 × 1440 pixels and has a refresh rate of 165 Hz. 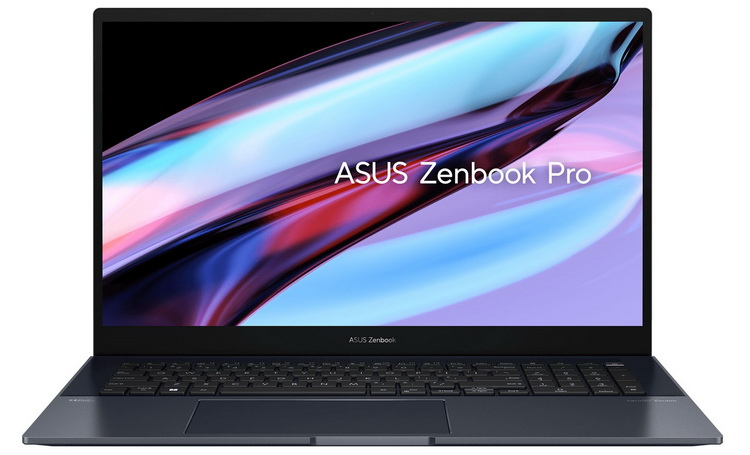 The Zenbook Pro 17 is more traditional in every way than the rest of the Zenbook Pro series introduced today. It does not have an AAS Ultra lifting mechanism, however, the lower part of the top cover serves as a kind of stand that slightly raises the laptop above the surface for more comfortable work. The company claims an updated touchpad and a 1080p webcam with noise reduction for the new product. 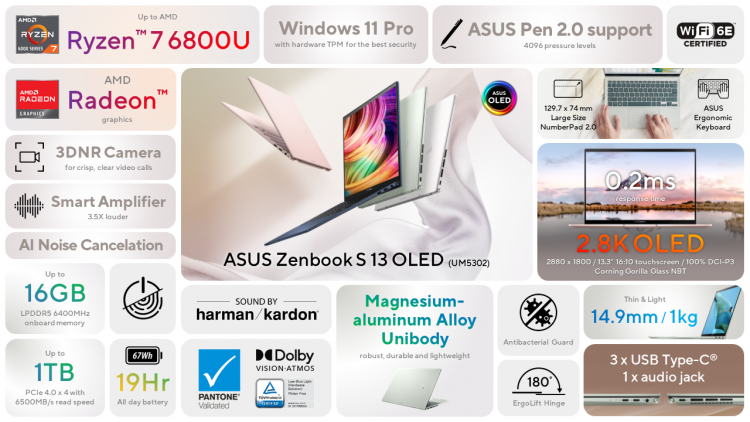 The manufacturer also introduced a pair of ultraportable laptops – Zenbook S 13 OLED (UM5302) and Zenbook S Flip OLED (UP5302). The former offers energy-efficient Ryzen 6000U processors up to the 8-core Ryzen 6800U model, the latter is equipped with Alder Lake-P processors and is ready to offer up to the 12-core Core i7-1260P. The AMD-based model offers up to 16GB of LPDDR5X-6400 RAM, while the Intel-based model can get up to 32GB of LPDDR5X-5200 memory. Both laptops are also equipped with NVMe SSDs up to 1TB. 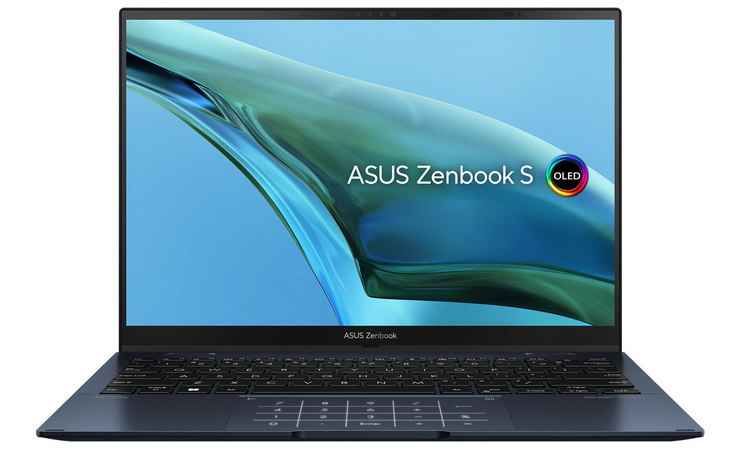 The case of laptops is made of magnesium-aluminum alloy. Both are very light. The Zenbook S 13 OLED weighs 1kg. The 360-degree Flip model weighs 1.1 kg. Both new items received 13.2-inch displays with an aspect ratio of 16:10, support for a resolution of 2880 × 1800 and a response speed of 0.2 ms. The Flip has a touch screen with Corning Gorilla Glass NBT protection. 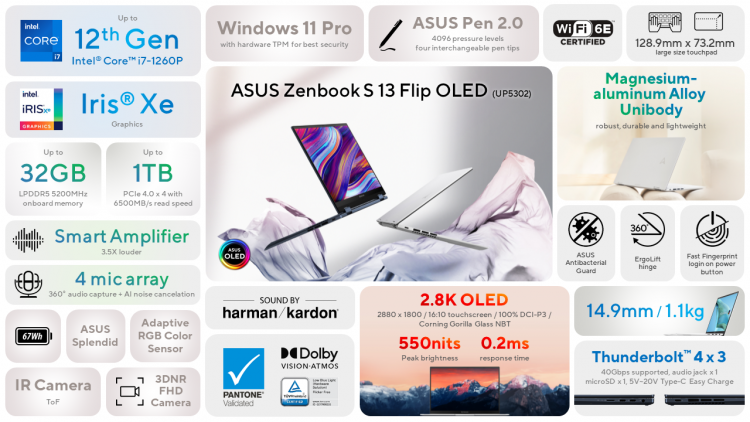 Marvel’s Spider-Man 2: will the PS5 exclusive have the co-op? A leak seems to confirm this

Titanfall 3 exists and is already available, explains Jeff Grubb: that's what he means

A full trailer for the third part of "Love, death and robots" has been released