Review of The Stanley Parable: Ultra Deluxe – to work with joy!

It’s almost impossible to talk about what’s going on in The Stanley Parable without spoilers. Unless, using metaphors and unrealistic situations that could happen in this universe. Unfortunately, I lack the talent for scripting, so for the purposes of presentation, we will talk about just one of the many classic plots of the game – the most slender in the opinion of the narrator.

And so, you are Stanley, an ordinary employee of the company, who every weekday comes to the cramped but cozy office number 427 to perform extremely routine obligations: Stanley has a computer on his desk, which receives orders about which buttons Stanley should press (literally). And he… just clicks on them. 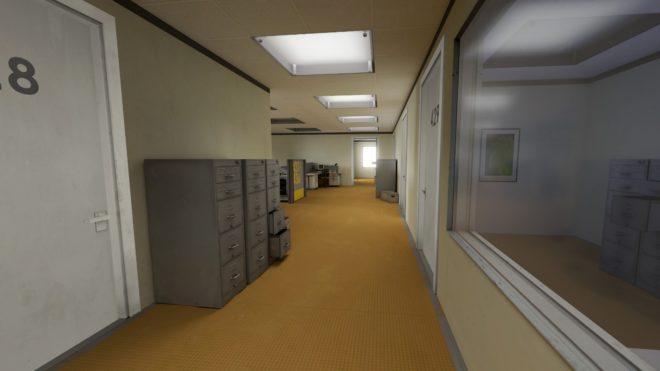 Each new instruction quite pleases Stanley. He feels that he is in the right place. He is comfortable, he likes monotonous work. But everything changes when, one fateful day, the instructions suddenly stop coming. No one knocked on the door to call Stanley to dinner, no one called him to the meeting. An hour passed, then another, and Stanley sat in front of a black screen in utter bewilderment. In all his years with the company, this has never happened before.

Stanley gets up and walks out into the lobby where his colleagues’ workspaces are organized – not a single person in the office. Stanley directs his steps to the meeting room and finds no one there either. Everything looks the same as always: the computers are running, the lights and ventilation are on, the projector is flipping through fresh slides with new proposals for improving efficiency, but no one is there to look at them. 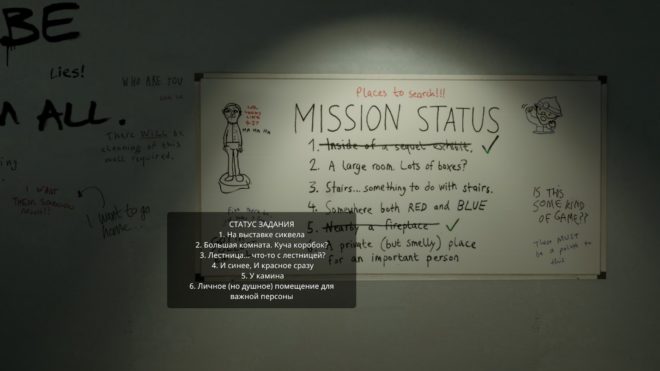 And then Stanley goes to the director’s office, but the director also disappeared somewhere. By some incredible miracle, Stanley manages to guess the only correct (out of ten thousand possible) combination from the four-digit electronic lock on the wall behind the boss’s massive desk on the first try and open a secret passage in the wall.

Stanley’s world, already trembling from what is happening, collapses completely when he discovers a secret surveillance complex in the dungeons: hundreds of monitors are dispersed along gigantic walls, each is assigned a number corresponding to the number of a company employee, each broadcasts their jobs.

After descending into the bowels of the building, Stanley finds a room with a mind control machine. Joy, sadness, daily routine – everything is taken into account by algorithms, structured and predetermined. And then Stanley decides to put an end to it. He no longer wants to be a puppet of the system, from now on he is the master of his own destiny. Stanley finds a switch, turns off the supercomputer and goes outside, towards a new life under his control, and the game begins from the beginning.

Now imagine all of the above being recited by the narrator, a well-placed voice-over, commenting on Stanley’s behavior in much the same but slightly more detailed manner. His thoughts, his reactions, his actions – everything is described by the narrator, most often anticipating the actions of the player himself, who directly controls Stanley (or does he still not control, but only amuses himself with the illusion of control?). 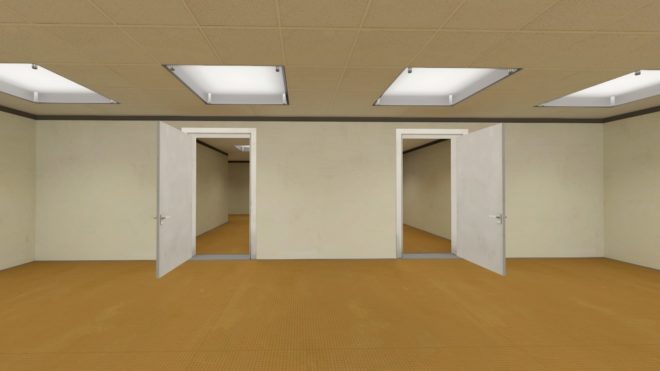 So, on the way to the conference room, Stanley finds himself in a room from which two similar doors lead, and the narrator, while you are aware of the prospect of choice, emphasizes that Stanley entered the left door. Which door will Stanley end up going through? According to Crows Crows Crows, it was these two doors that became the main design element of the game, and the whole subsequent idea grew around this very room, becoming a consequence of the choice that it gave.

The Storyteller has to change the structure of the narrative every time Stanley makes a decision, and the player’s entire subsequent activity in The Stanley Parable essentially comes down to finding more and more design decisions from the developers in terms of game design, since with each new choice everything changes – in an unexpected way and radically. 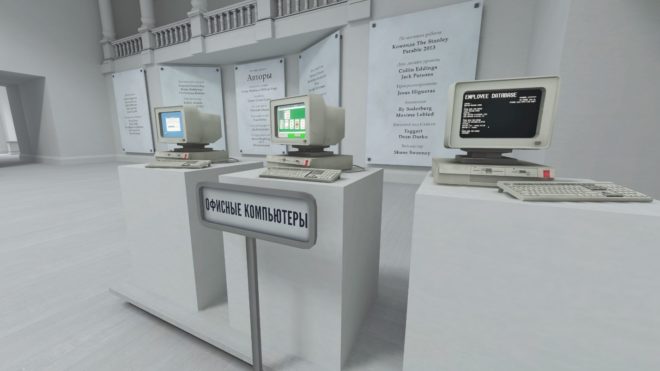 But for an award, this would not have been enough either then (in 2014), or even more so now, so the developers came up with a narrator as the main mover for an amazing narrative. We have already seen something similar in the notorious Portal with its unusual rooms and breaking the fourth wall GladOS, but in The Stanley Parable the dialogue between the player and the narrator is at the forefront.

This is an unusual case when you are not so much playing a game as it is playing with you, with elegant humor raising topical issues that concern not only the gaming industry, but also human nature in general. This is not so much a walking simulator as an exotic experience, a kind of ode to the art of game design. 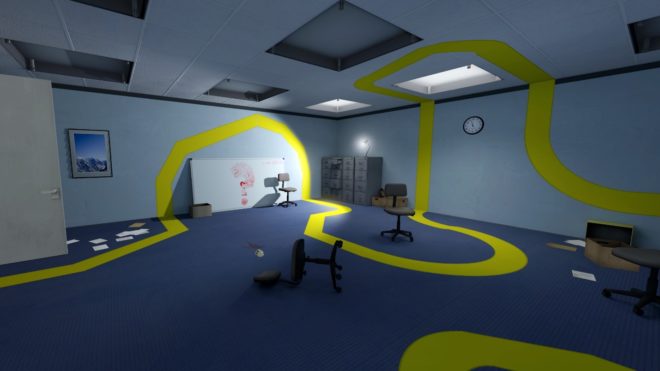 Kevan Brighting’s narrator is excellent. He uses every possible method of linguistic manipulation to keep control of the situation. He will shame you for your vanity and appeal to your instincts, feign indifference and reflect on personalities, threaten and revel in his own power, repent and dream – each new dialogue will nurture a lively, charmingly self-centered personality from the voiceover.

And in the end, most players will feel sincere sympathy for the narrator, will grieve about parting with him when they complete the game, unlocking all possible endings, and will swear in the comments when the authors forget to mention him in the next selection of the best game AI – after all, this is what he is (narrator) and achieves! 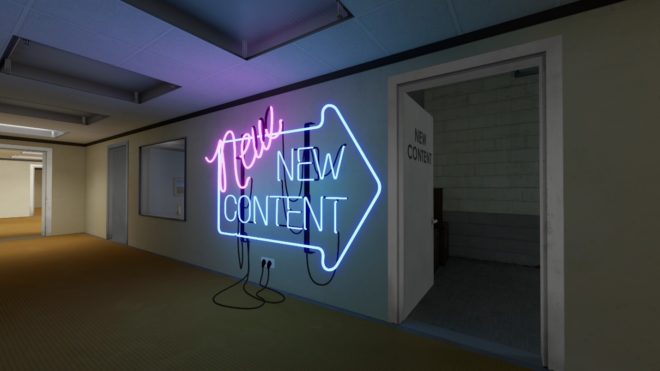 The extended version of the game offers a choice of both old and fundamentally new content – each closes in about two to three hours. That is, users who have never climbed into Stanley’s shoes at all, the Ultra Deluxe edition will give about five to six hours of gameplay. When you first start the game will ask if you went through the original – the answer will depend on how soon the player will gain access to the door with new content.

As you explore the new loops, you’ll visit the narrator’s makeshift memory hall, help them come up with ideas for The Stanley Parable sequel and participate in a playtest of exclusive mechanics, take a look at the Steam Review Graveyard, discover snobbish and jealous tendencies in your partner, unlock several new endings, and many achievements. 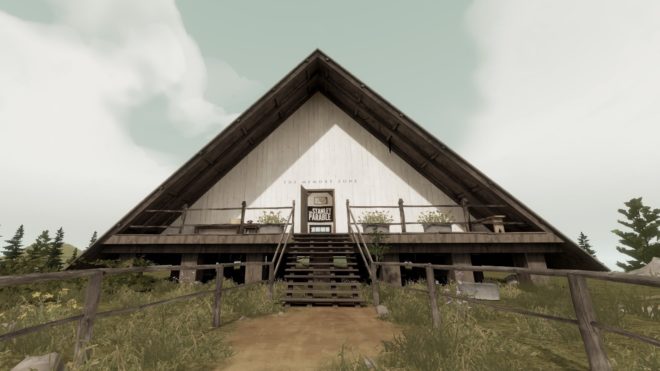 Along with the new content, the game makers have added some very nice features to the advanced settings section. So, the game now has the ability, at the player’s request, to skip episodes related to suicide or mental trauma, turn on the highlighting of phrases that affect the game, and most importantly, add captions localized into Russian over English text found in notes, on magnetic whiteboards, and etc. Not all text gets automatic translation, but most of it does.

The Stanley Parable: Ultra Deluxe looks very good: the engine allows you to create high-quality three-dimensional objects, play with light, shadows and reflections. The designers had enough tools and skill to make the atmosphere in no way inferior to the original. 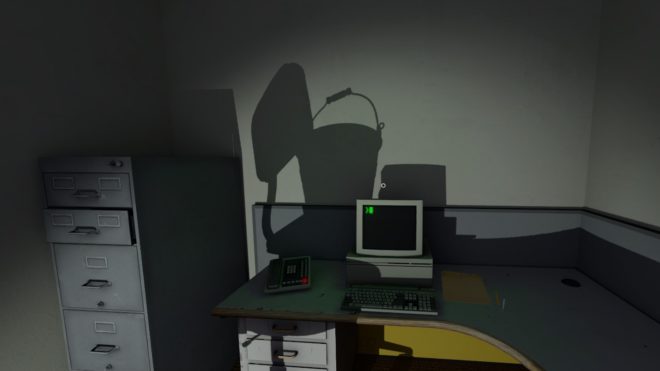 The Stanley Parable: Ultra Deluxe is still the same ingeniously designed, insanely funny, unlike any other walker that raises questions about the narrative structure of games and the freedom of players.

The updated version will discuss with you the difficulties that game developers face when creating sequels and working with the community, and ironically over the problems of modern game development.

This is still one of the most outstanding games in its genre and a visual aid for indie (and not only!) developers that even the most shabby templates and simple tools can be turned into an original concept, it would be an idea. Don’t pass by.

Point for the best bucket in the gaming industry

Translation of in-game texts does not work everywhere

The presentation of Arma: Reforger, which will be officially presented on May 17, leaked to the network