Hard to believe, but true: About 30 years after the grandiose Turtles in Time on the Super Nintendo, a sequel is finally appearing in spirit. And as you can see from our big preview of Teenage Mutant Ninja Turtles: Shredder’s Revenge, it seems to be turning out really great. In our preview, we praise, among other things, the pretty retro look, the sound, the feel and the – in all probability – great fan service.

Not only did we get a full look at Nickelodeon’s iconic Battle Toads game, which is due out this summer, we also got the chance to talk to some of the people behind the game. Of course we said yes and chatted for a good half hour with Adrien Marie, the brand manager of publisher Dotemu, Jessica Richard (communication manager at Dotemu) and Eric Lafontaine, the marketing manager of Shredder’s Revenge developer Tribute Games. Among other things, our interview is about obtaining the license, the concept of the game, the models from the 87 TV series and Turtles in Time, why the developers think 2022 is the perfect time for a Turtles return and the comeback of the brawler genre . We hope you enjoy the translated interview.

PC Games: How did you come up with the idea of ​​developing a new game about the Turtles? The brand is nowhere near as big as it was in the early 1990s.

Eric Lafontaine: Jean-François Major, one of our colleagues and co-founders of Tribute Games, wanted to make a Turtles game at least five years ago. He used to be at Ubisoft, where he had already worked on games based on TMNT. He’s always enjoyed being creative and working on his own IPs at Tribute Games, but he’s always said that if he ever does another game to an outside brand, he’s keen to make another Turtles game.

He’s a huge fan. He even dressed up as Raphael as a kid and of course played the TMNT arcade game and Turtles in Time an awful lot. That’s why he kept asking Nickelodeon about the license and saying, “Hey, guys, we’re ready for this and we really want to make a Turtles game.” At certain intervals he sent his ideas to Nickelodeon and didn’t give in. At some point, Nickelodeon asked for a concept and we were able to deliver immediately.

We knew all along that we definitely wanted to capture the style and tone of the 1987 series and had it all worked out. We all grew up with the series and knew where to start. That was also a great fit, because our style complemented the template. At Tribute Games we stand for pixel art and humor and so one cog turned into the other.

That’s why we also think that Shredder’s Revenge is a great homage to the ’87 Turtles, but also to the other Turtles universes. The game is full of references to comics, video games and even action figures to the Turtles. We see our game as a declaration of love to the Turtles and everything that makes them special. Or to cut a long story short: We do Shredder’s Revenge because we are fans. (laughs) 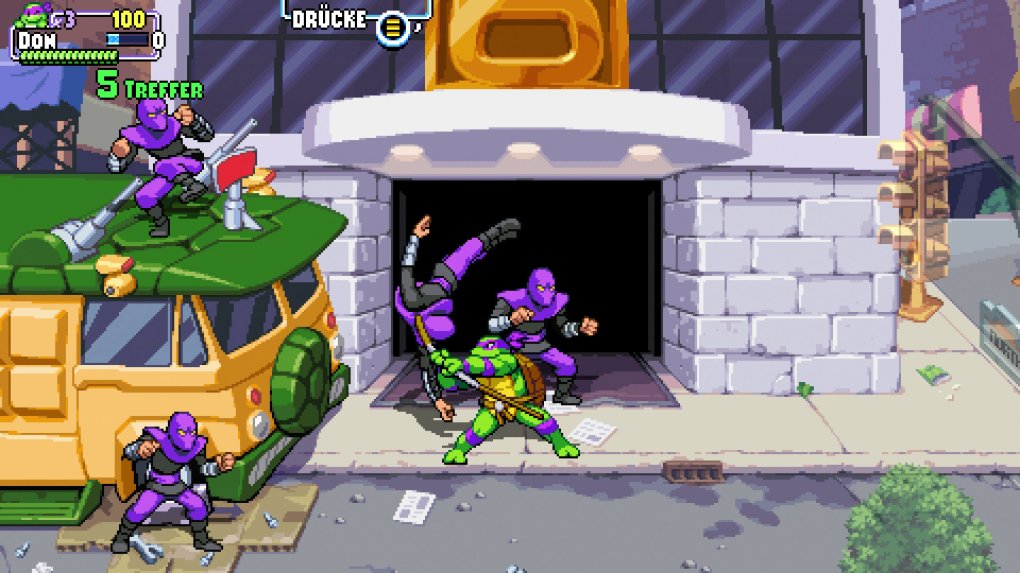 TMNT Shredder’s Revenge: “We want everyone to have fun with our game.” – Developer Interview (3)

PCG: You can actually tell that from the intro. But how did you manage to get Faith No More’s Mike Patton on board?

Turtles in Time is considered an absolute classic and the best Turtles game of all time, but soon the title could actually be knocked off the brawler throne after 30 years, because Teenage Mutant Ninja Turtles: Shredder’s Revenge is about to become a fantastic sidescroll brawler will. We have already played the title and in this video we tell you why fans of Leonardo, Donatello, Michelangelo and Raphael can be happy.

PCGH Cyber ​​Week 2022: Strong offers for everything to do with PCs, barbecues and smartphones

15 days of shopping madness! PCGH Cyber ​​Week is bringing strong deals to www.cyberweek.deals #advertising from May 13th to 27th

jessica richard We definitely wanted someone to do the theme song who was as ’90s as the Turtles are. So we sent out a few inquiries and Mike Patton’s agent got back to us. Mike checked out our demo back then and we found that pretty exciting in itself. We got together pretty quickly after that. We had our 90’s icon and Mike was super happy to be working on a TMNT project too.