It could have been Will Smith’s great redemption: The celebrated actor, musician and producer – even after countless iconic roles still for many of the (only) “Fresh Prince of Bel Air” – wins his very first Oscar after a career spanning more than 35 years . Deserved, one must honestly admit. The actor, recently known as a Hollywood rowdy, shines in the drama “King Richard”, a film about the two legendary sports talents Serena (Demi Singleton) and Venus Williams (Saniyya Sidney) and their rugged father and coach, Richard Williams (Will Smith). with a complex and emotional performance that is very impressive. The feature film directed by Reinaldo Marcus Green (“We Own This City”) also knows how to please in terms of high-quality and pretty, if somewhat conservative, camera work.

All well and good up to here, but unfortunately this is overshadowed by the actions of one man, or rather two men, who add a bitter aftertaste to the actually noble tennis biopic. On the one hand, there’s Will Smith’s rather stupid behavior on stage at this year’s Oscars, from which the film can probably never really detach itself. However, this has already been discussed so extensively and heatedly (also in our podcast) that we can only say: continue in the text. On the other hand, it’s quite strange to tell a film about two such exorbitantly huge legends and still throw yourself almost exclusively at the success-loving man behind them – without a critical look or any change of perspective.

19:42
Cinema highlights 2022 I The biggest blockbusters of the year

We look, matching the Blu-ray and DVD release of the Oscar film (May 19, 2022), intensively on the cinema strips and reveal what the story has to offer, who might like it and who might not like it at all. A spoiler before we get started: We’ve got a lot to complain about.

The small suburb of Compton in the metropolis of Los Angeles is famous for its enormous relevance to rap culture, but also for its violent level of crime, gang wars and systematic poverty – especially in the late 80s and 90s. In addition to world-famous figures such as Snoop Dog, Dr. Dre or Kendrick Lamar also sprang from the legendary Williams family of the city of almost 100,000 inhabitants.

After one failed marriage each, Richard Williams and Oracene “Brandy” Price (Aunjanue Ellis) wed in 1980 and soon fathered two daughters, Serena and Venus. Although the two already have several children from their past relationships, this is significantly different this time: There is a very special plan for the two Williams newcomers – more precisely a 78-page career plan – to guarantee a better future. 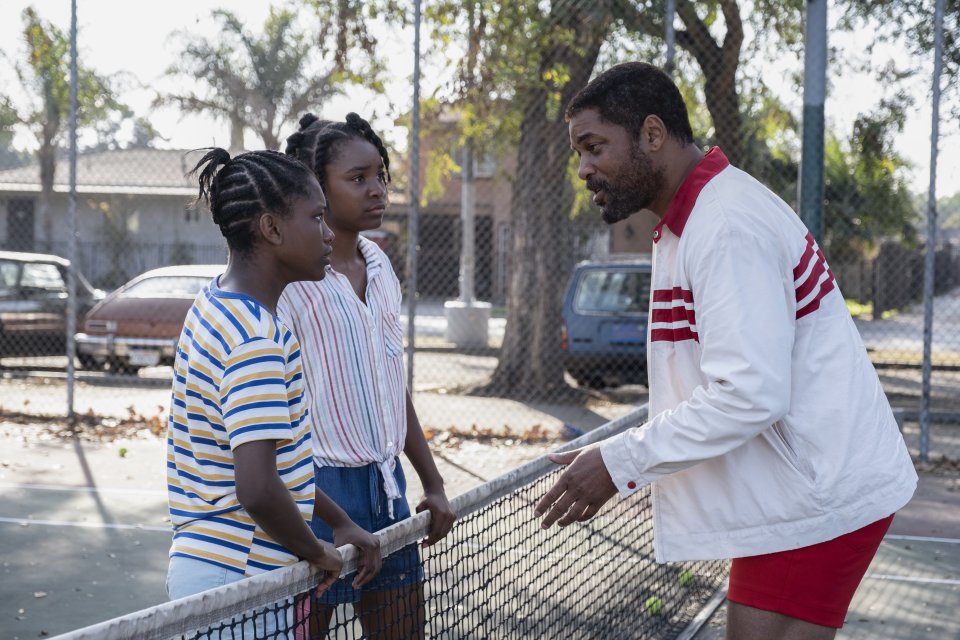 Brandy and Richard are avid tennis fans, a sport that even today is still largely dominated by the white, privileged upper class. The fact that Serena and – especially – Venus are extremely talented is clear from a very early age. So what does the ambitious Williams couple do? Anything within the realm of possibility to guarantee the success of the two girls despite financial worries, racial structures and a lack of relationships. This leads from the run-down sports field nearby, where Richard is repeatedly beaten up by a local gang after coaching his daughters, to the Olympus of the sports world.

The successes speak a clear message: Venus won more than 49 singles titles in the course of her career, Serena even 73. The Williams sisters also won 24 doubles tournament victories together. Both are considered two of the most talented and successful tennis professionals of all time – as Richard wanted, wrote and planned back in 1980.

American filmmaker Reinaldo Marcus Green does a solid job of telling a Hollywood-friendly and easily digestible sports story about ambition, faith and disadvantaged young talents who fight their way to the top against all odds in “King Richard”. Ah, nice! Several picture book comparisons come to mind – and by the way, not because director Green uses an unusual visual language or impresses with great camera work. Each selected frame fulfills its purpose, skillfully. No more and no less.

Rick and Morty is getting an anime series