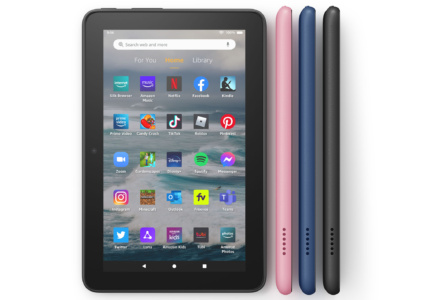 Amazon has updated its compact and affordable Fire 7 tablet for the first time in 3 years. The novelty has improved performance, extended battery life and a USB-C port for charging.

According to the manufacturer, the new Amazon Fire 7 received a 4-core processor, which is 30% more productive than its predecessor. In addition, the amount of RAM has been increased from 1 GB to 2 GB. However, the company claims that the tablet will be able to work about 40% longer on a single battery charge. Thus, the device should provide about 10 hours of battery life in web surfing or watching videos. The outdated micro-USB charging port has finally been replaced by the modern USB-C port. The device is available with a 5W power adapter. However, it is not specified whether the adapter will be included in the basic package or offered as a separate option.

For all the improvements you have to pay a little more than before. The Amazon Fire 7 now has a starting price of $59.99, up from $49.99 before. The new model has only 3 color options (black, blue, pink), the manufacturer abandoned the green version.

From the authors of Machinarium comes Phonopolis: discovering the new graphic adventure

V Rising got off to a great start on Steam