Anyone who buys Early Access games always takes a risk: will the developers keep their promises? Do I have to wait forever for the release? In the end, are all the features on board? But Gently Mad Studios shows how to do it right: The Wiesbaden team released Endzone: A World Apart almost a year ago as an early access version including a transparent roadmap. Regular updates kept the fans engaged, features were added, the interface was revised, the balance was improved. Endzone has been officially finished since March 18th – in the test we check what has happened since our last preview.

Update: DLCS and console version
In the meantime, Endzone has been expanded by two DLCs, we have tested the first add-on Prosperity for you here. The second expansion, Distant Places, has been available since May 17, 2022 and adds new exploration options to the game. Endzone: Survivor Edition has been available for Xbox Series S/X and PS5 since May 19, 2022. This edition costs about 50 euros and includes the main game as well as the first expansion, Prosperity. We have added all information about the console conversions on the third article page.

Indie hit Banished obviously made an impression on Gently Mad. Endzone follows a similar pattern, but transports the concept into a setting with a fallout flavor: In Endzone, a nuclear war has swept humanity off the scene, and the few survivors retreated to underground bunkers. Only 150 years later do humans dare to surface again and begin to build modest settlements in the post-nuclear wilderness. Refreshing: Unlike Wasteland 3, for once there are no monsters, mutants or crazy robots here. Rather, the danger comes from radioactive radiation, acid rain, adverse weather and marauding gangs, making the setting much more realistic than other end-of-the-world games. The scope is also completely fine for the small purchase price (24 euros): Endzone does not offer a story campaign, but at least an extensive tutorial, as the centerpiece a survival mode (free game) and several scenarios with different mission goals. 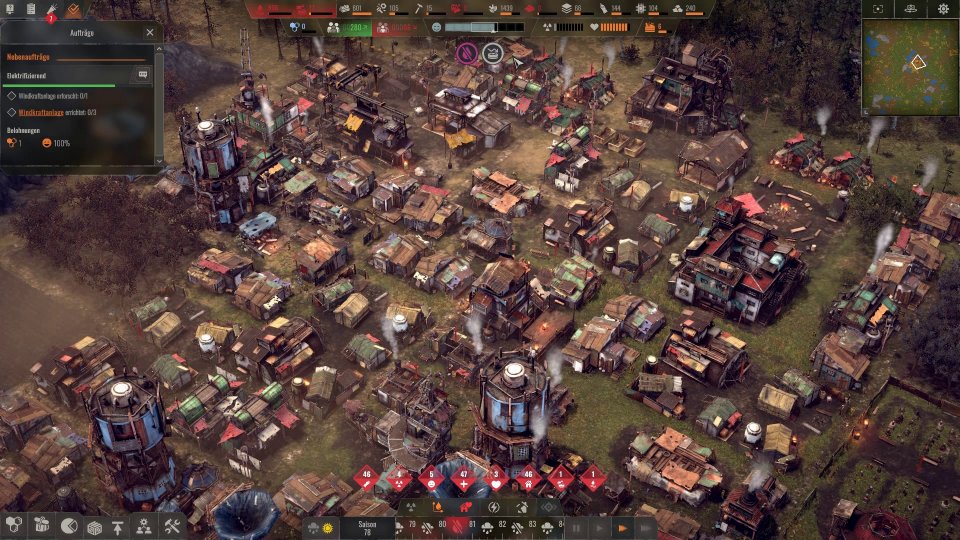 Endzone is played at a leisurely pace, but quickly turns out to be a tricky fight for survival.

The basic principle always remains the same: We start with a few settlers, a village center and a handful of raw materials, which we put into the first construction projects. In the beginning there is the water supply, which requires a cistern and a jetty on a nearby lake. Then we still have to assign a few workers as water carriers who scoop the cool water into the camp, because the residents don’t lift a finger on their own. We don’t really need to close the job menu from here, because in Endzone you’re busy around the clock distributing the right number of people to the right jobs. This micromanagement is sometimes tedious, but the residents act relatively reliably. And if you’re wondering why a shell isn’t completed or a resource isn’t picked up, you can even display every assigned worker in detail, including inventory and route. This makes what is happening, especially in the first phases of the game, understandable.

Our camp quickly fills with life: Gatherers and hunters get herbs and food from the forests, fishermen cast their fishing rods at the lake. Lumberjacks bring in boards or reforest cleared forest areas. Farmers let various fruits and vegetables thrive in the fields, shepherds keep rabbits and chickens in their stalls. And scrap collectors meanwhile go out to search through rubble and mountains of rubbish for usable raw materials. Particularly practical: If a resource has been harvested in one place, we don’t have to demolish the building and rebuild it somewhere else – instead we simply move the work area. Clever! 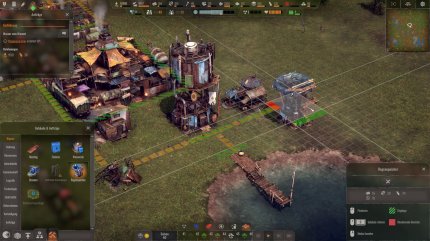 All buildings are placed on a grid.

As the settlement grows, so do the demands: herbs, for example, are only processed into medicines in the medical supply store. And schnapps can be made with fruit, but we don’t have it as food. Meanwhile, decontaminators clean up irradiated depots, the dead have to be buried and fields need watering as soon as there is no rain. When push comes to shove, the trading post can also help, here we exchange products and raw materials for much-needed goods. But the most important are the recycling huts, where scrap is separated into four components that we urgently need for other products.

This is how metal is processed into tools, without which nothing works after a while. Fabrics, on the other hand, go to the tailor, who patches together simple protective clothing. This is also badly needed, because radiation is an omnipresent opponent in the end zone. If our residents run unprotected through the irradiated wilderness, they become ill, become slower, sterile and die earlier! Activated carbon masks offer better protection, but for the right raw material you first have to find a charcoal burner that burns tree trunks. Of course, this also increases the wood consumption, which devours additional tools and personnel. And if you want to make high-quality radiation protection suits, you also need plastic, which requires another recycler. In short: there is always something to do.

But productivity is not everything. For example, if you set up a noisy workshop next to a hut, the annoyed neighbors will hang their heads. On the other hand, if you set up a living group around a market place or a sociable campfire, satisfaction increases. And that’s important! Happy settlers are faster, more efficient and live longer. At the same time, you should also keep the commodity chains in mind. For example, wood has to be brought from the lumberjack’s hut to the warehouse or to the charcoal burner – longer distances cost valuable working time. Settlers must also eat and drink daily. Therefore, to save time, we install some food dispensers and faucets at key positions. However, we have to allocate additional workers as logisticians for them, which we lack elsewhere. 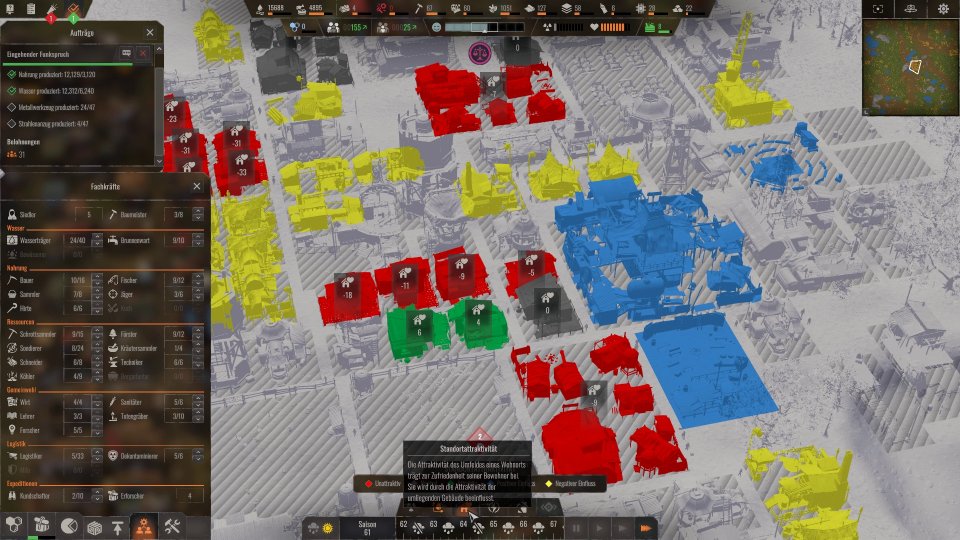 If you want satisfied settlers, you shouldn’t build noisy businesses next to dwellings.

There are new residents either through optional side quests or naturally. To do this, however, we must first build the appropriate dwellings. We can accommodate a lot of settlers in larger camps, but they don’t have any privacy there and therefore don’t produce offspring. If we build smaller huts instead, couples in particular will move in there and start families at full throttle. But be careful: If you build a lot of houses, you risk growing too quickly. Then supplies run out, diseases can hardly be contained, protective clothing and tools become scarce. Similar to Banished you drive your settlement back against the wall.

Jump to the comments (6)

EBay offers: Nintendo Switch OLED at a discount, here is the price

Return of the wizard in the first trailer of the classic adventure game Simon The Sorcerer: Origins