Evil Dead: The Game – Kandarian massacre with anything. Review

How nice it is to once again plunge into the grotesque world of Evil Dead with its pretentiously caricatured heroes, exaggerated flat (but so dear) humor and, of course, absolute Evil as the main antagonist. And the asymmetric gameplay actually fits perfectly into the mood of the Evil Dead universe, where a group of people canonically opposed an otherworldly enemy, far superior to them in their paranormal power. True, the exact hit in the surroundings and the abundance of references to the cult classics are not even half the success – the concept must be correctly implemented, and even so that the root process does not get bored as quickly as any minor character of the series who strayed from the group dies. Evil Dead: The Game partly realizes its potential, but still stumbles over some controversial nuances. But let’s talk about everything in order. 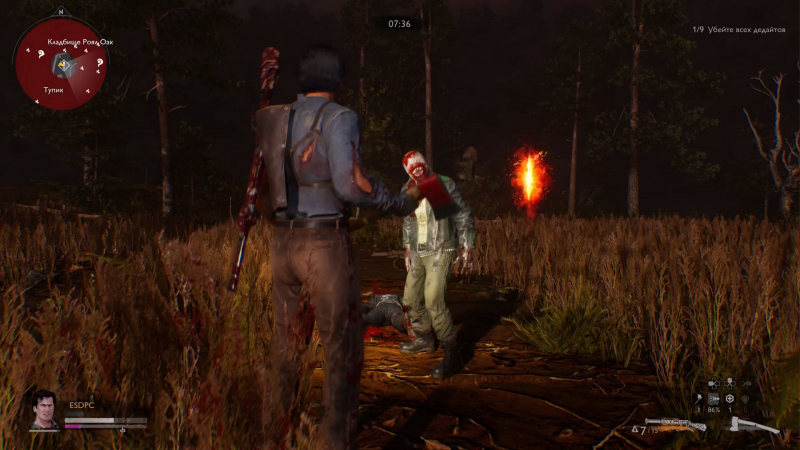 After a couple of seconds and a couple of swings of the ax, it will be appropriate to say the crown: “Groovy!”

⇡#Battle for the Book of the Dead

The core game mode of Evil Dead: The Game is Survivor vs. Demon, where a human team of movie and TV characters take on a Kandarian demon. All the characters are controlled by the players (the ability to play together and against AI is also available) in a four-on-one format. However, the numerical advantage is still on the side of absolute Evil – the map is teeming with deadites, possessed by skeletons or other representatives of the army of darkness.

In this mess, the survivors and the demon have certain goals – naturally, opposite each other. Survivors first need to find fragments of the map, while the demon searches for the survivors themselves or, thinking ahead, plots on future points of interest of people. After all, when the map is completed, the team of humanity will definitely come here to get the Kandarian dagger and get the lost pages from the Necronomicon. And at this moment, a guaranteed head-on collision begins, where all parties will fight furiously to prevent the opposing force. 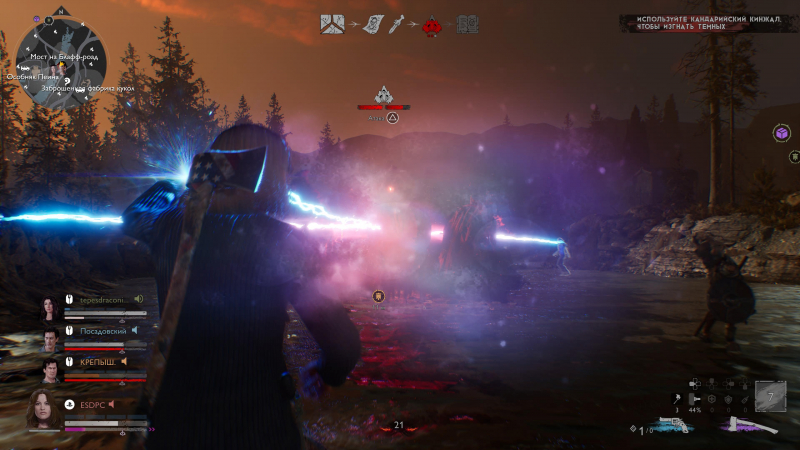 The penultimate stop of the survivors is the destruction of the Dark Ones. But if the creators of the Necronomicon also fall, then the demon will have only one thing left to do – to annihilate the legendary grimoire or, alternatively, all opponents that will protect the sinister book from destruction to the last. Ironic, isn’t it?

⇡#Ash and Team vs Evil Dead

To save the world, people will not hurt to assemble a strong team! Representatives of humanity are divided into several classes: leaders, warriors, hunters and helpers. Each role, of course, has its own purpose in the party and its own special active skill. Sheryl Williams can heal the wounds of allies in the temporary healing zone; temporarily, but completely block incoming damage under the power of Heinrich the Red; and Ed Getley (a minor character from Evil Dead 2, in case you suddenly forgot that no wonder) can activate a special lantern, the light of which will temporarily disable the traps left by the insidious demon.

And, for example, the version of Ashley Williams from the series, who settled in the leader class, has a special aura that increases the damage of allies and slows down the growth of the fear scale (we will return to it later). It is noteworthy that the charismatic Ash is represented in each of the classes – in a visual incarnation from each stage of his exuberant filmography. Funny detail.

But playing for the survivors is not very interesting. The team moves around the map, completing quest tasks, collecting equipment and various consumable items along the way, which should help in an unequal battle with Evil. Also, people regularly have to shoot back and fight off crowds of the undead and cope (or not cope) with the intrigues that the Kandarian demon will prepare for them. For the first two or three parties, the template is able to captivate, but by the fourth, hopeless boredom begins to overcome.

But to plot intrigues in the role of a demon, unlike the gameplay for people, is incredibly provocative and exciting. There are only three classes here – the commander, the puppeteer and the necromancer. The fundamental difference lies in the undead that will fill the map (for example, the commander has rotting deadites, and the necromancer has bone-crunching skeletons), as well as a special skill that somehow strengthens our minions. And, of course, the main feature of each of the classes is the appearance of the boss, with which we will terrify miserable people! Evil Necromancer Ash seems to be the most noteworthy option in this company, although the unnamed puppeteer and Henrietta Warlords are quite effective in combat.

The plan of action for evil spirits varies from session to session. Sometimes, sensing easy prey, it makes sense to try to destroy or at least thoroughly beat up the enemy team by moving into a car, a minion, a tree, or even one of the survivors. True, the trick will work only if the fear scale of the potential victim reaches a certain threshold. You can also stick to a waiting tactic and instead of a crazy search (with a view from the eyes of a demonic entity – just like in the movies!) For stray team members, save up hellish energy and properly fortify yourself with traps at the place where a face-to-face meeting will definitely happen (for example, at the Kandarian dagger) .

This is exactly what the famous victory “on thin” looks like.

And, of course, you should properly prepare for the battle by increasing the level of threat. At each step of this indicator, we can improve or open one of the features. For example, the ability to create portals from which additional warriors of darkness will invade the mortal world. It will not be superfluous to increase the effect of obsession, so that, after possessing, it will stay in the vessel longer and deal more damage. And, of course, the most interesting option is the ability to incarnate in the form of a boss with a special set of abilities, which may well, if not overthrow the entire team of survivors, then certainly give these guys a devilish beating.

Alas, even playing as Evil does not have bottomless potential. After a dozen or two games for any of the teams, having tested all the available classes, tested all possible tactics and received a fair amount of fan service, you suddenly realize that there is incredibly little content in the game, in fact. The set of situations and the arsenal are rather meager, the abilities of different heroes somehow duplicate each other, and the overall progress system is frankly ill-conceived.

The player receives a certain number of points after the match (for a victory – more, of course), which can be invested in the development of a certain class. Levels are expensive, and for matches in a particular role, they increase extremely slowly. And most importantly, the improvements themselves, aimed at percentage and numerical improvements of various parameters, force you to play only for a certain class / hero. It’s scary to imagine how long it will take to fully pump at least two. Although, I think, few people will actually check it.

What is really unexpected is the screamer in 2022

In addition, the longer you play Evil Dead: The Game, the more obvious its rather bizarre balance becomes. As a rule, the survivors hardly have a chance to defeat the demon. The Kandarian at almost any stage of the game mercilessly tears a team of people to shreds. And only a rare team – experienced and equipped with the right characters – will be able to defeat the villain. And this, of course, does little to motivate you to continue playing, especially given the solid duration of the matches – an average of half an hour.

Unfortunately, instead of additional multiplayer modes or increased variability in the main mode, the developers for some reason decided to add a single player game to Evil Dead: The Game. It turned out, frankly, ambiguous. Before us are original reminiscences of events from large and small screens with an emphasis on survival, resource control, reaction speed and the ability to digest numerous references. There are so many of them here that it seems that the very essence of the single mode lies precisely in them. And although sometimes there are really curious troubles, this appendage is difficult to perceive as an integral gaming adventure. Five chapters (soon to add a sixth) are played quite insipidly and seem completely optional to pass. It seems that the developers from Saber Interactive decided to spend their fuse on something else…

PS5 Pro with double the power of PlayStation 5? RGT confirms the latest leaks