In 2016, Salt and Sanctuary was released, one of the first games inspired by the Dark Souls series. A successful mixture of soulslick and metroidvania mechanics, a charming 2D style and a gloomy world that people talk about in riddles – for these and other features the game got an army of fans and high marks, which allowed the authors to think about a sequel. And now, after 6 years, it came out – we tell in the review about Salt and Sacrifice.

The events of Salt and Sacrifice develop in the same gloomy world of the first part, but with a different hero and plot. Instead of a brave warrior rescuing the princess, we are given the role of a sentenced criminal, bound hand and foot. As in Skyrim, we quickly turn from a ragamuffin into a hero – hordes of magicians invade the peaceful kingdom and arrange chaos, and criminals marked by the Inquisitors are mobilized to fight a new threat. 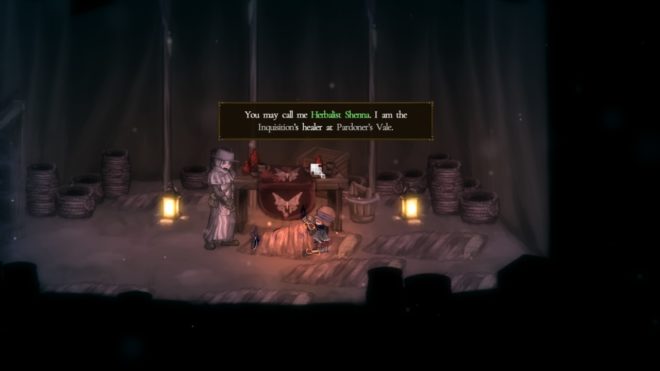 Salt and Sacrifice opens with a demonstration of role-playing opportunities – we are given to create a character, customizing his appearance, choosing a class and a criminal past. There are 8 classes in total, each determines the basic parameters, starting weapons and equipment. Looking ahead, I’ll say that the leveling capabilities allow you to retrain the hero into anyone, but it’s still better to decide in advance on the intended build.

Like Dark Souls, Salt and Sacrifice throws us into an incomprehensible gloomy world where NPCs speak in riddles, and you can communicate with inanimate objects, which, however, will not shed light on what is happening. Although in terms of understanding, this game is still simpler – the main character has a voice and can choose options in dialogues, as well as endlessly ask the NPC about something. 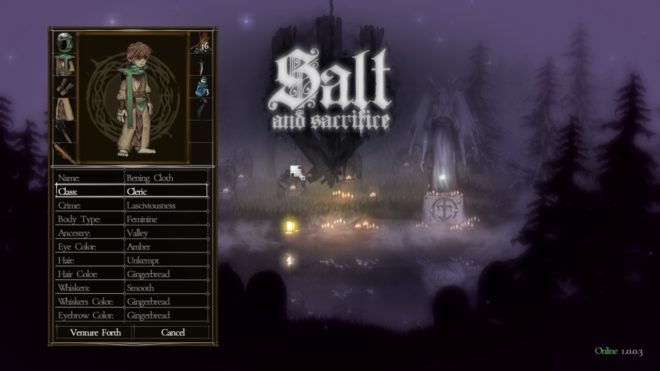 The gameplay of the game borrowed ideas from Monster Hunter – there is a starting village where the hero can be dressed, upgraded, strengthened, taken to the merchants and made to pet a cute cat with deer antlers. In the middle of the base there is a portal, by activating which we will go to clean up various worlds from raging magicians.

The hunting of monstrous and large bosses is structured in an interesting way: in five huge worlds made according to the rules of metroidvania (some places are inaccessible until you find new relics or kill more bosses), you can find hooks that activate the hunting process. After that, one of the magicians appears, and we first rush around the whole map and kill his minions, and only then we face him one on one. 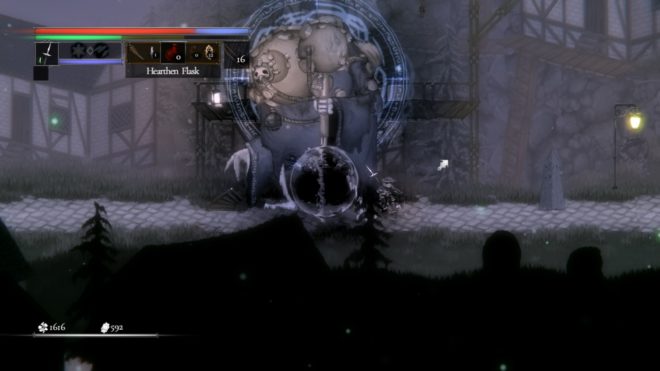 Thus, Salt and Sacrifice departs from the stereotyped “soulslick” and offers a different approach to gameplay, forcing the player not to go to any point on the map, but to explore it in more detail in search of hidden bosses and various secrets.

Difficult fights, souls, bonfires in the form of altars, consumable items migrated from Salt and Sanctuary, and there, I remind you, they borrowed exactly what was in Dark Souls. However, compared to the first part, some mechanics have been cut. So, the totems placed near the altars have gone somewhere.

Elements of platforming remain – yet, it’s still a 2D metroidvania. So get ready to jump a lot and curse the one who came up with this, because a lot of health is lost from the falls that happen here often. In the sequel, the control has become nicer and more responsive, but it takes some getting used to. 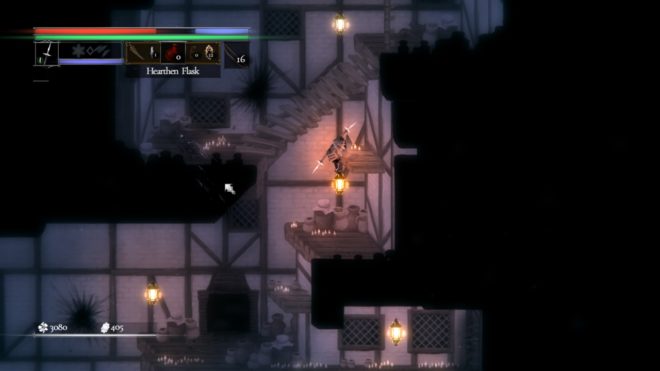 The bosses turned out to be not very problematic – moreover, the basic opponents on the location and the dummies called by the magicians for some reason begin to attack each other, making your work easier. Victory will bring not only souls and currency, which is used by the merchant, but also equipment recipes, the manufacture of which will require resources scattered around the world. This mechanic made me happy – it’s nice to get a whole set of armor and weapons from a fire and ice mage, and then mix the equipment in any way you like.

In addition to crafting on the base, you can do leveling – and here it is clearer than in the original. The character has a general level, which affects health, and a huge skill tree, which is responsible for improving everything else. Here they allow you to roam and build such a build as you want – even a magician, even an archer, even a swordsman, at least someone else. 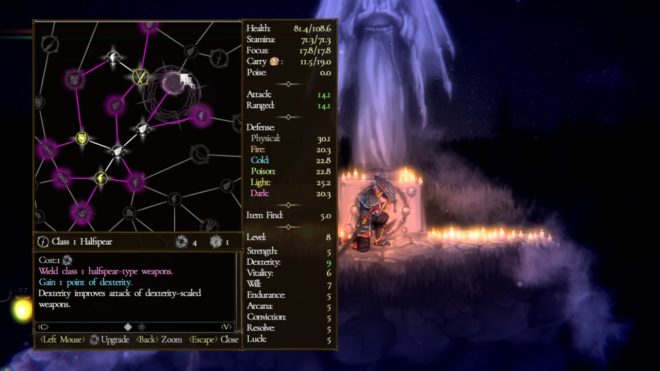 There are really a lot of weapons and equipment here. Each of them will require you to master a certain skill – for example, if you want to become a skilled archer, then pump the mastery of this weapon.

The sequel has acquired what the original lacked so much – multiplayer mechanics. True, everything here is taken from Dark Souls – there are notes from other players and an altar with which you can call a friend for help or invade the world to other users. 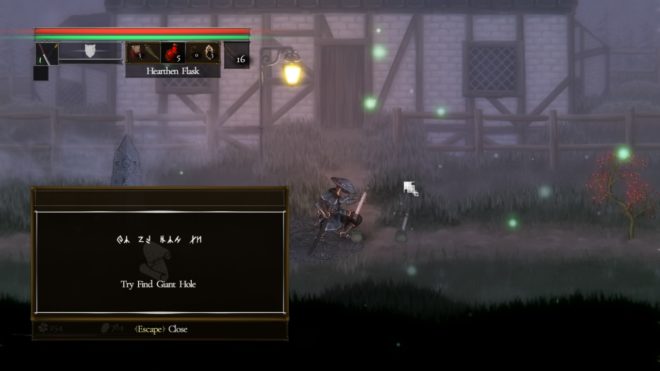 The attack animation is now smoother and more responsive, although the overall visual style hasn’t changed much. Salt and Sacrifice still shows a slightly soapy, gloomy picture with pseudo-3D backdrops and puppet-like characters. If in 2016 such a picture looked original, today it can be called mediocre.

We are gradually approaching the shortcomings of the project, and, unfortunately, there are a lot of them. The most striking of them is the unbalanced gameplay. Ordinary bobbleheads will cause more problems than their bosses, and some opponents for some reason inflict triple damage in one swing of the sword, which is equal to almost certain death. The archers on the platforms shoot too fast, and by the time you get to them, you’re more likely to take damage. By the way, the main character with a bow can easily shoot the first bosses without giving them a chance. 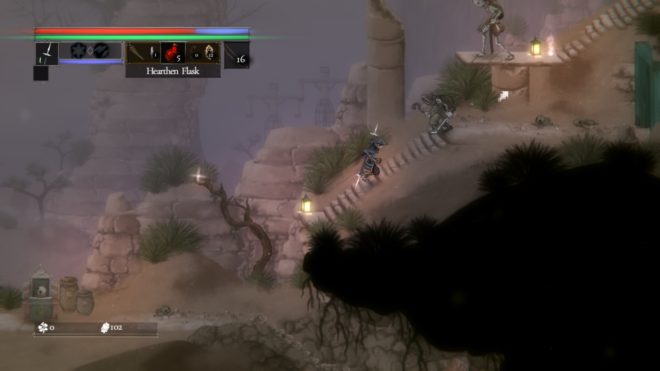 There is no map and fast travel system, which is why the process of hunting mages quickly becomes boring, because you have to go from the very beginning and look for this villain from memory. Although there is a ghost pointer in the game, it does not help much. As in the original, the Russian language was not delivered on the release, which will be a big obstacle to exploring the world.

Despite the flaws, Salt and Sacrifice is not a bad game – it just has quite a few changes from the original. It’s a good metroidvania that incorporates elements of platforming, hunting from Monster Hunter and a lot of Dark Souls without turning into an unplayable Frankenstein.

Original bosses that, in addition to their appearance, surprise with attacks and abilities

Rich leveling options, a bunch of weapons and equipment

Few innovations compared to the original

Lack of such elementary mechanics as fast travel and world map

God of War Ragnarok has a release date! – New trailer: Father and Son

Forgotten Fables in the test: what can the DSA adventure do?