The big hardware fair Computex took place in Taipei (Taiwan) in the last few days. The Covid 19 pandemic still cast a shadow over the trade fair, which last took place as a face-to-face event in 2019. This year, company representatives and journalists were also on site after the break, but significantly fewer than before the pandemic began. In addition to numerous other exhibitors, the two competitors AMD and Nvidia also presented some innovations and plans for future products at Computex.

Of particular importance were the so-called keynotes, i.e. presentations that were prepared and also streamed on the Internet, in which important announcements and products were presented. Companies like Asus and Gigabyte also had things in their luggage that can play a role in future upgrades of gaming PCs or even for new purchases of a complete system. We are therefore summarizing the most important information about PC hardware that has been made public at or within the framework of Computex – however, the keynotes from AMD and Nvidia were rather disappointing when viewed from a gamer’s point of view .

Nvidia: Ultra-fast monitor, but RTX 4000 not an issue

Before the start of Computex, the only question for many observers was what other news Nvidia could announce next to the next graphics card generation RTX 4000. After Nvidia’s keynote, however, the disappointment in the gamer camp was great – because Team Green talked about many things, just not about RTX 4000 and the associated Ada Lovelace architecture.

Rather, Nvidia only used the keynote, in addition to some things related to cloud computing that are more important for business customers, to explain some features related to ray tracing, DLSS and Reflex, some of which were new, and to present a new gamer monitor. The monitor is created in cooperation with Asus and offers a refresh rate of up to 500 Hertz. Nvidia and Asus market the monitor as the fastest eSports monitor in the world. Previous monitors usually work at 144 to 180 Hertz, the fastest models come to 360 Hertz. 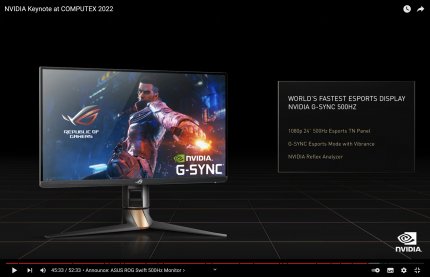 In order to implement the high refresh rate, the new monitor works with a TN panel, a modernized version of the now very old technology. TN panels are known for offering fast switching and response times, but are inferior to IPS or VA panels in terms of crisp colors and contrasts.

However, because of the comparatively cheap production at the time, when tube monitors were still considered the standard, they paved the way for the switch to flat monitors that were also suitable for gaming. Apparently only eSports gamers are the target group for the announced particularly fast Asus monitor, for whom speed is everything, because in their matches an advantage of maybe only one millisecond can bring the decision.

For hobby gamers, even if you are more ambitious, neither the resolution of only 1080p (1920×1080 pixels) nor the size of only 24 inches are up to date. We definitely recommend a larger monitor with WQHD (2560×1440 pixels) and from 144 Hertz. Incidentally, the new Asus monitor was also used by Nvidia to introduce Reflex, a technology that is intended to actively reduce the latency between the PC and the monitor. Reflex is available on certain games, and the monitor must also support Reflex.