Hardspace: Shipbreaker Review – Get Out of Debt!

A one followed by nine zeros, ten thousand times one hundred thousand, or quite simply: a fair amount of coal. That’s how deep you’re stuck at the beginning of Hardspace: Shipbreaker in the lousy. And for the next 100 hours of play, it’s your job to work off this sum from your creditors – in sweaty, grueling drudgery. Sounds like lots of fun, right?

Now, of course, you can say, “Hey, I already spend my everyday life going to work, making money and getting out of the red. I don’t need that after work in gaming form!” But the developers at Blackbird Interactive (known for their RTS series Homeworld) pack the endless race in the capitalist hamster wheel so appealingly that we didn’t want to put the mouse and keyboard aside in the test. You’re not sitting at the supermarket checkout, cleaning toilets or trying to pull a fun game test out of your fingers in the open-plan office. You are doing the most dangerous job in the entire universe, that of space scrap collector! A job so hard that it could easily fill its own series on DMAX, alongside King of Trucks and the Yukon Gold Rush. 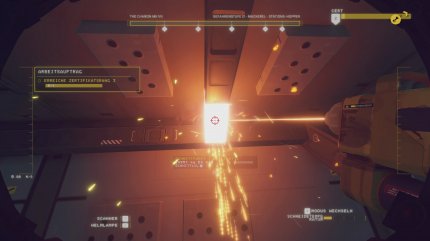 Your laser cutter has two different modes: one for disconnecting and one for cutting through things.

Hardspace: Shipbreaker takes place in a distant future, in which large parts of the solar system have been completely industrialized and the earth has increasingly degenerated into a galactic garbage dump. Of course you need people to take care of all the junk. And that’s where you come in! As the newest employee of the massive LYNX Corporation, it’s your job to use state-of-the-art salvage technology to dismantle old ships into their component parts, scavenge valuable raw materials and then sell them for profit.

Sounds really simple in theory, but it’s actually almost a science in itself: Before you start, you have to analyze each wreck with the scanner to see what it actually consists of and where possible weak points are. Because in the rarest of cases, such a boat can be filleted in no time at all like a Christmas goose.

You have to work your way from the inside out, loosen spot welds on the basic structure with your laser, remove the hull, cut it into its small parts, carefully remove the interior and then, depending on its condition and reusability, put it in the melting furnace, the recycling plant or the waiting freighter throw. According to the motto: the good ones in the potty, the bad ones in the crop.

Your trusty hand hook, a kind of high-tech lasso, with which you can drag objects through space, will help you with all of this. Thanks to the built-in shock module, you can also throw things away from you with a bang. Or you use so-called connectors to bind several scrap parts together. This works excellently due to the successful physics simulation!

Fortnite: Bundle with Obi Wan Kenobi available – that's in it

With the help of a giant cat, Samsung showed what a mobile 200 MP sensor is capable of