Matchpoint: The competitor to Tennis World Tour in preview

The heyday of the tennis boom in Germany has subsided: Boris Becker is attracting attention elsewhere, the former world number one Angelique Kerber has been in a bad form for months and the currently best-known German player, Alexander Zverev, is waiting after his Olympic coup Last year on his first Grand Slam success. At least the chances are not that bad at the moment.

We will not be able to celebrate a win in the four major tournaments Australian Open, French Open, Wimbledon and the US Open in Matchpoint – the title from Torus Games lacks the licenses for that. Nevertheless, there are some real players with whom we can swing our virtual racket. In an approximately one-hour event organized by the German publisher Kalypso Media, we had the opportunity to take a closer look at the upcoming tennis game. Afterwards we grabbed the racquetball ourselves and hit a number of balls on clay, grass and hard courts. Can the sports game outperform its competitors AO Tennis and Tennis World Tour?

09:28
Matchpoint – Tennis Championship | PREVIEW | In the footsteps of Virtua Tennis and Top Spin 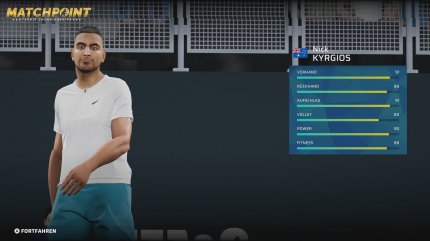 Outgoing Australian Nick Kyrgios also features in the game. However, its virtual counterpart does not destroy any clubs on the assembly line.

Although the licenses of the absolute top stars of the scene such as Rafael Nadal, Roger Federer, Novak Djokovic, Serena Williams or Iga Swiatek are with the other tennis games, Matchpoint has some more or less well-known real players to offer.

In addition to up-and-coming hopefuls like Amanda Anisimova and Carlos Alcaraz, there are also former world number ones like Victoria Azarenka and Daniil Medvedev to choose from. In total we can compete with 16 licensed professionals.

These are joined by tennis greats from the past as part of a purchasable Legend Edition. Here too, however, we must not hope for Pete Sampras, Björn Borg or Boris Becker. As of this writing, only two Allstars have been confirmed: Tommy Haas and Tim Henman.

Most of the tournaments and places are only fictitious locations. This is also understandable, because the TV rights for the Grand Slams alone are divided between several channels with exclusive reports in tennis and therefore the licenses for these big events probably cost a lot of money.

So in Matchpoint we play the London Grand instead of the major tournament in Wimbledon. The gameplay on the pitch is much more important anyway, and it already works very well. 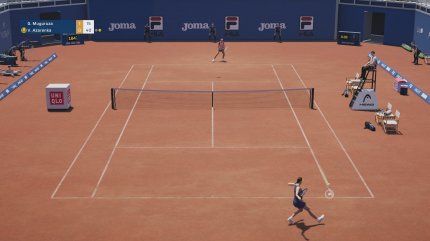 The gameplay always offers exciting and varied rallies on all surfaces.

The competition is criticized again and again, especially when it comes to playability. Both Tennis World Tour 2 and AO Tennis 2 could never follow in the footsteps of the great Virtua Tennis.

While AO, the official game of the Australian Open, shines with a very chic staging and Tennis World Tour has a large license package up its sleeve, tennis fans complain about the actual gameplay of both titles:

Too little realism, levels of difficulty that are too far apart and wooden animations are the most striking points. Matchpoint wants to fill this gap and offer a better game experience. After a number of games, one thing is certain: the differences are noticeable, but by and large only marginal so far.

Cult of the Lamb, 60,000 players on Steam: second best launch ever for Devolver