“It’s like a house on wheels. I would live in it “- Ukrainian military about Australian armored vehicles Bushmaster PMV – Aroged 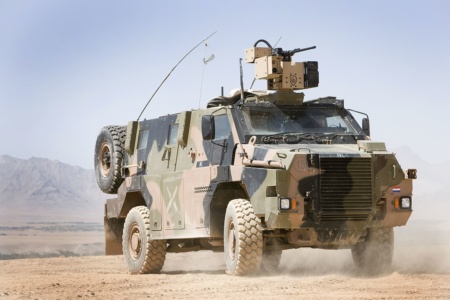 22 June Sydney tabloid The Sydney Morning Herald published a mini-report from Ukrainian Konstantinovka, in the Donetsk region – in an interview, our military shared their impressions of the Australian Bushmaster PMV armored vehicles, which are now helping to destroy Russian invaders.

Bushmaster PMV (Protected Mobility Vehicle – protected mobile vehicle) or Bushmaster IMV (Infantry Mobility Vehicle – infantry mobile vehicle) is a wheeled all-wheel drive armored vehicle manufactured by Thales Australia under license from the Irish company Timoney Technology. Developed for the Australian Army in the 1990s, the armored car was used as the main means of transporting infantry during the wars in Iraq and Afghanistan, and now they are useful in the Donbas under heavy Russian artillery bombardment, rockets and airstrikes.

Since the start of Russia’s full-scale invasion, Australia has already donated 20 Bushmasters worth about $38 million (AU$50 million) and six M-777 155mm howitzers to Ukraine. The driver of one of the Bushmasters, Vitaly, said that Australian armored vehicles are “much better” than armored personnel carriers inherited from the Soviet Union.

“Firstly, it is very comfortable. There is air conditioning, it’s like a house on wheels. I would live in it. I spend all my time inside the car.”

Ukrainian soldier and driver of one of the Bushmasters Ukraine has 19 Bushmasters left – one of the armored vehicles was lost during the battle with the Russians near the village of Trypillya. At the same time, all the Ukrainian soldiers who were in the car during the attack survived. This was told by Vitaly, who was nearby and saw the fight with his own eyes. The unit commander, callsign Technician, says the attack showed the quality of the Australian vehicle, which did an excellent job of protecting the Ukrainian defenders inside while moving from one location to another.

“It is armored inside, and this is a big plus of this machine, because it protects the life and health of soldiers. If we had more of these vehicles, we would save more of our fighters, and this is the most important thing.”

Commander of a unit fighting in the east

Two people are needed to control the Bushmaster: a driver and a mortar. The vehicle can carry five soldiers, as well as supplies of food and water. The cab is equipped with air conditioning and a water cooling system. According to Technik, his team took possession of the armored car in two to three days. The Ukrainian military is urging the Australian government to hand over more Bushmasters, as well as howitzers, tanks and precision-guided long-range projectiles.

Bushmaster is a protected transporter, not a classic armored personnel carrier. It has large dimensions and weak armament, so it is not intended for direct participation in the battlefield – only for transporting military personnel to the mission area. It is sufficiently protected to withstand 5.56 mm and 7.62 mm small arms balls, fragments of grenades, cartridges, a mine explosion with 6 kg of explosive, which corresponds to the 2 level of protection of the STANAG 4569 standard. Protection can be enhanced by installing hinged armor , which provides protection against armor-piercing balls of 7.62 mm caliber. In addition, the machine has protection against mines and ambushes (Mine-Resistant Ambush Protected (MRAP)).

Square Enix wants to create 'narrative' NFTs: will they be about Final Fantasy and Dragon Quest?