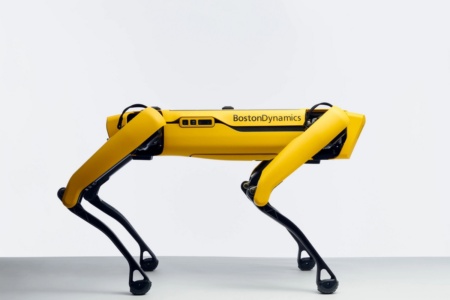 It seems that the dog-sapper of the Chernihiv State Emergency Service Patron will soon have a serious competitor! The US Army has agreed to provide one of its two Spot robots, developed by Boston Dynamics, to help the American non-profit organization with the clearance of Ukrainian territories contaminated by mines and other explosive items from Russian occupiers, reports foreign policy.

The HALO Trust, which conducts humanitarian demining of contaminated areas, has several government contracts to work in Ukraine and will use the famous robops to eliminate mortar shells and cluster munitions in the de-occupied territories around Kyiv.

HALO Trust CEO Chris Wheatley said that Spot performed well during tests last year specifically in operations with small unstable items – similar to those found throughout Ukraine, where the Russian invaders visited. The HALO Trust hopes the robot will be able to safely move unexploded mines and cluster munitions that Russia indiscriminately uses in Ukraine.

With the help of a robotic arm, Spot is able to move mines and non-detonated munitions, such as the same cluster bombs, into a pit with other munitions, where they can be safely detonated at a distance from the civilian population in batches of 50 to 100 shells and without any risks to everyone 10 HALO teams deployed in Bucha and Brovary.

Spot can be taught to automatically perform repetitive tasks without human assistance, while in more difficult terrain such as minefields and polluted roads, the robot is controlled by an operator.

HALO Trust hopes to increase the number of demining teams in Ukraine to 50 by the end of 2022, making the need for demining operations like Spot even more pressing. HALO Trust CEO Chris Whitley said he already sees his sappers deploying a pack of up to a dozen robotic dogs.

Boston Dynamics has not commented on the specific transfer of the robolitz to the HALO Trust. The US Army Command, which approved the transfer of the dog, also did not respond to numerous media inquiries.

Spot as a whole is an effective tool for protecting people from all sorts of dangerous and harmful factors, and the robot is often used to check potentially dangerous regions. For example, at the end of 2020, one of the Spot robots was involved in measuring the level of radiation in the places of burial of radioactive waste in the Chernobyl exclusion zone.

Deminers are increasingly using robots (such as wire-cutting machines and ground-based radars) in the field to increase productivity and reduce the risk of explosions. In 2019, Massachusetts State Police used Spot to remotely survey potentially dangerous locations. At the same time, the U.S. Army uses the Common Robotic System, a 11-kilogram tracked work that can clear buildings of bombs and identify enemies for infantry squads before close combat, while other units prefer the six-wheeled Man Transportable Robotic System Increment II, which can be controlled with a hand controller. The State Department also provided funding to the Swiss Mine Action Fund for the purchase of seven-ton MV-4 robots,

At the same time, the MV-4 is far from being as maneuverable as the Spot: for example, with a width of about two meters, it simply cannot squeeze through the trees in dense forests. HALO also received a high-tech, remote-controlled Robocut lawnmower from the US Army.

Formerly New York Times reporters analyzed more than a thousand photographs from Ukraine of the aftermath of Russian shelling and identified more than 2,000 munitions. Among them, at least 210 are prohibited by international treaties. Such munitions can pose a serious threat to the civilian population for decades after hostilities have ended. They are especially dangerous for children, who are very inquisitive by nature. By the way, recently the Ministry of Education and Science conducted an online lesson on mine safety for schoolchildren – all materials are in the public domain.

According to the most optimistic forecasts, Ukraine need 5-7 years to clear the entire territory.

New PlayStation Plus: until when will the games in the catalog be available?

Bungie demanded $7.6 million from the organizer of the DMCA attack on cutscenes for Destiny 2