On June 24, 2022, Fire Emblem Warriors: Three Hopes, the next Musou offshoot of the strategic role-playing series, was released. Read our Fire Emblem: Three Hopes review here! You don’t necessarily need prior knowledge of the events of Three Houses to plunge into the fray. Although both titles are set in the game world of Fódlan and mostly feature the same characters, we are dealing with two very different stories.

Three Hopes has become a classic Warriors game combined with a major Nintendo brand, along with some aspects carried over from the adventure of the three House Speakers. The mixture turned out to be digestible in the first part as well as in Hyrule Warriors. In numerous battles you have to conquer enemy bulwarks, eliminate adversaries and assert yourself against masses of opponents. So that you can find your way around easily and are optimally equipped for the fight, we have summarized the most important basic tips for you. In our beginner’s guide you will find information on class advancement, the ideal preparation and the quest system.

As in Three Houses, the characters can be assigned classes. These differ primarily in terms of the weapons used and the types of damage they inflict.

In the current Warriors spin-off, there is a recommended class for each unit that works particularly well with their abilities (symbolized by blue advancement arrows in the class change selection menu); however, you are not bound by this. Depending on which species the opponents belong to, it can be worthwhile to have several classes for one unit up your sleeve.

Recommended Editorial ContentThis is where you will find external content from [PLATTFORM]. To protect your personal data, external integrations are only displayed if you confirm this by clicking on “Load all external content”:

There are four different categories: primary, intermediate, advanced and ultimatum. There are different classes available to you, which can branch out later and unlock further options.

In order to level up your character, you must first master the current class. In addition to experience points that you collect in battle, this happens during training on the training ground in your camp.

In order to make your fellow combatants sweat, you have to invest training points. A limited number of these are available to you in each chapter. Explorations and subquests will occasionally give you extra points if you’ve already used up yours. A handy side effect is that the characters always train in pairs, which also increases the support value between them. 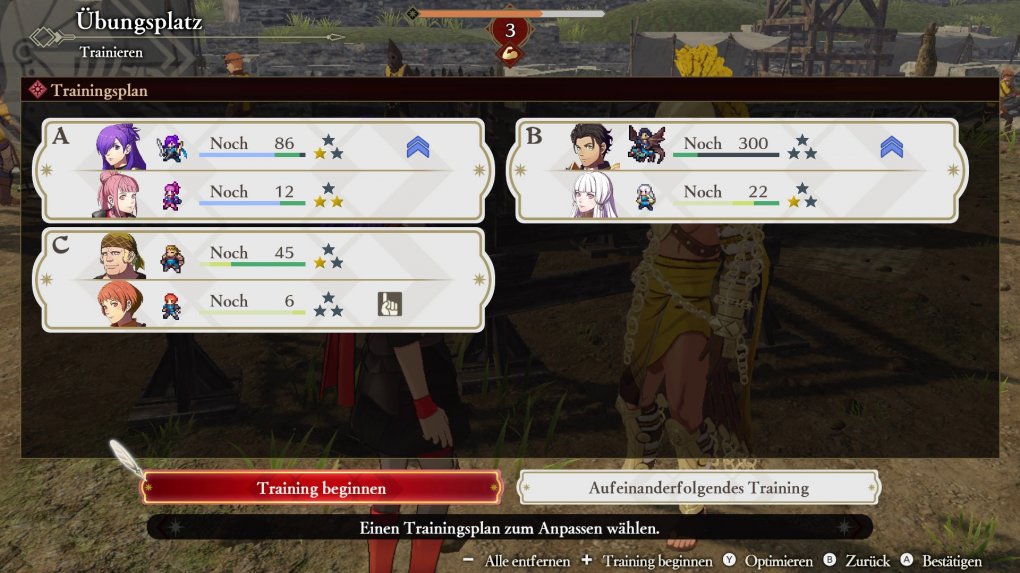 If all three stars light up next to the current class, you have mastered it and can switch to the next level. To do this, you need the appropriate seals, which you either buy from the dealer or receive as a reward in battle. No matter how hard you train, not all classes are available right at the beginning.

To unlock the next level, you must first expand the training ground at the manager. This in turn requires resources that you collect in the course of the game. This way you don’t run the risk of your units being promoted too early.

It can also be worth not only developing a main class path, but also leveling up suitable additional classes to unlock their combat techniques and magic. For example, the abilities of the various melee paths (fighter, soldier, myrmidon) and the spells of the different monk paths can be combined well. So it’s best to try around and look for the best mixture for you.

With Fire Emblem Warriors Three Hopes, the strategy series gets another Musou offshoot. In the test, we reveal whether the title is convincing.

Kingdom Maker: Shape a fantasy kingdom according to your wishes

In the free2play strategy game Kingdom Makers you become a powerful noble who rules over a huge kingdom. #advertising

Three Hopes is a classic Musou game, but it still retains the tactical essence of the Fire Emblem series. That’s why it’s important that you prepare for the fights and don’t stumble onto the battlefield without a plan. This doesn’t start at the start of the mission, but already in your camp.