F1 22: The official game of the Formula 1 World Championship in the test

Who would have thought that Formula 1, which had been declared dead, would trigger a new boom within a very short time? Probably very few. There are many reasons for this: We have, among other things, the Netflix documentary Drive to Survive, which even regularly captivates those who don’t like racing in front of the screens, a gripping title fight between seven-time world champion Lewis Hamilton and the rising star Max Verstappen last year , a number of talented young drivers such as Lando Norris and Mick Schumacher, as well as the Ferrari brand, which is finally fighting for victories again this season.

There is also good news for fans of virtual racing, because in addition to the official Formula 1 game, F1 Manager 2022 from developer Frontier will be launched later this year. For many gamers, the management simulation may even remain the first choice. With F1 22, the racing game series from Codemasters and Electronic Arts falters enormously. The problems are even quite complex: from new useless features to an overly aggressive AI to major gameplay problems.

My house, my money, my style 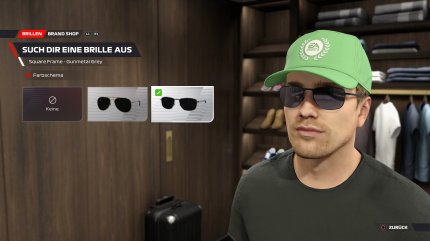 Glasses, hats, trousers, shirts and shoes: in F1 Life our character can be customized from head to toe.


Last year, another story mode called Braking Point made its debut in the F1 game. The story about the youngster Aiden Jackson and the old master Casper Akkerman didn’t revolutionize the genre, had some logic errors and sometimes also dialogues that made others feel ashamed, but overall it was an innovation that was fun.

Codemasters announced back in March that the story would be on hiatus this year. That’s what F1 Life is for. A kind of player hub where we are allowed to display our trophies, clothes and furniture. We unlock them either in the game through certain achievements or in the Podium Pass, including microtransactions, of course.

This allows us to style our homes, change our clothing style and, rumor has it, even collect watches and glasses. However, since the Podium Pass is only unlocked at launch, we don’t yet know how much bling-bling it really is.

On the other hand, we can estimate how much added value the whole thing has. Namely none at all! Friends can visit our home through the player hub, but that’s about it. While it’s a nice idea to somehow incorporate the sometimes swanky Formula 1 lifestyle into the game, there are other, much more appropriate options.

Among other things, more personal questions in the interviews or press conferences would make much more sense. Instead, Codemasters serves us the same meaningless answer options in career mode as in previous years.

Hot sledges with a roof over their heads

In addition, there are supercars on top. At the time of the announcement, there was a lot of confusion among fans of the series as to whether it was the Australian touring car series of the same name or just chic speedsters. It’s now clear that we’ll have the posh streetcars of some Formula 1 teams in our booth and that we’ll be allowed to drive these super sports cars ourselves in some challenges.

Including the two official safety cars, a total of ten of these vehicles are available to us after activation by simply turning a lap. These include well-known cars such as the Mercedes-AMG GT Black Series, the McLaren 720S and the Ferrari Roma, but with only four brands, the selection at release leaves a lot to be desired.