Capcom, a veteran of the gaming industry, treats his heritage with special trepidation, and often accompanies anniversaries with announcements of new products, collector’s editions or collections for connoisseurs of retro gaming. For the 30th anniversary of the arcade, for example, the developers released Capcom Arcade Cabinet: Retro Game Collection, which included classic games from the 1980s, and on the 30th anniversary of the studio, they published the wonderful “Encyclopedia of Capcom Heroes” in collaboration with Brady Games.

The Capcom Fighting Collection is timed to coincide with one of the most significant dates not only for the studio, but for the entire gaming industry – the debut on arcade machines of the first Street Fighter, which is considered one of the progenitors of the entire fighting game genre. 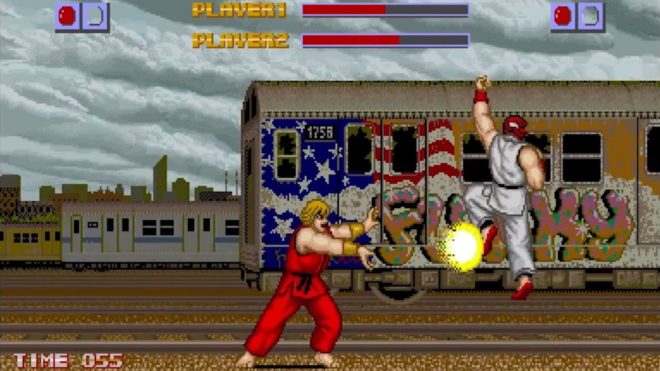 To properly celebrate the occasion, the company released a collection of ten classic games, which includes several titles released outside of Japan for the first time, as well as a game that has until now been a Capcom Play System exclusive.

Capcom Fighting Collection invites players to a colorful menu stylized with nostalgic art. The developers even prepared a separate soundtrack for sections of the collection of five new songs. 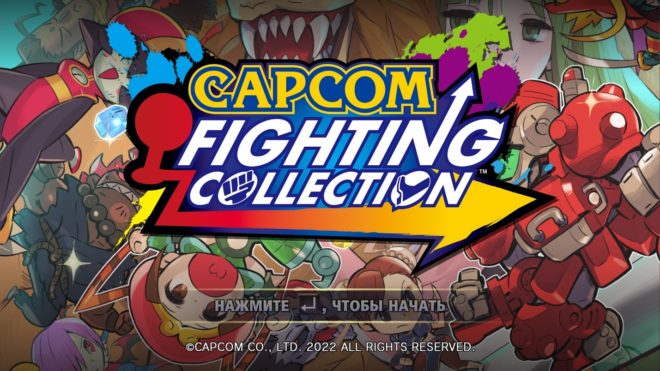 There are not so many system settings, mainly hot buttons for controlling virtual machines, functions for collecting data and network options where you can set voice chat parameters and server response preferences to search for rivals.

For those who like to set records within the Capcom Fighting Collection, a system of achievements has been thought out with hundreds of points for each of the presented games and general user statistics. In addition, there is a museum with a fantastic concept gallery and a collection of vintage music that first sounded from the speakers of CPS arcades decades ago. 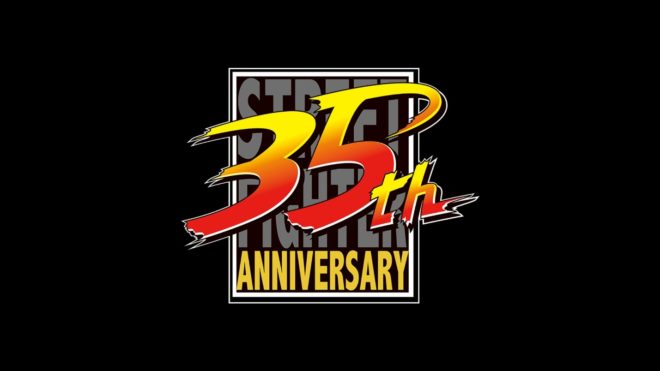 For online matches, regular and ranked matches are provided, as well as user sessions with customizable lobbies and the ability to join by their ID, as well as a separate leaderboard that combines the achievements of players from all over the world.

In offline mode, before breaking into any of the games, the user can access the settings section to set the AI ​​difficulty, attack power (the higher it is, the more damage from the blows of fighters), set the timer for the match, animation speed and the maximum number of rounds – in modern fighting games, all this is by default, but not typical for arcade ones. 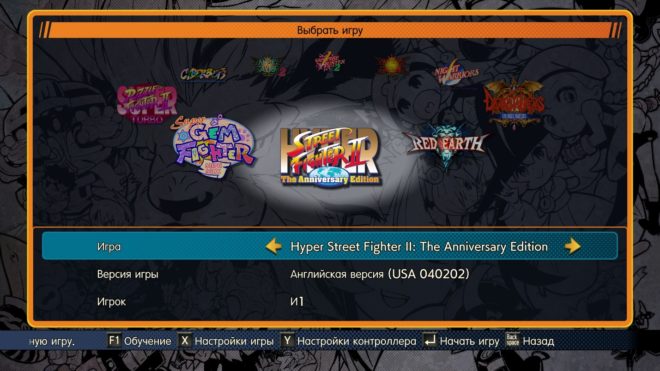 What’s more, each game has an additional EX settings section where you can take advantage of advanced picture settings, remove splash screens and downloads, unlock tricks and secret characters, and turn on “coin mode” as if you have a limited number of tokens to throw at machine for receiving loans.

There is also a “training mode” equivalent to the classic practice mode, where with infinite health, customizable AI settings and on-screen display of pressed combinations, you can hone techniques alone or with a partner in a local game. Here’s what the Capcom Fighting Collection offers fans: 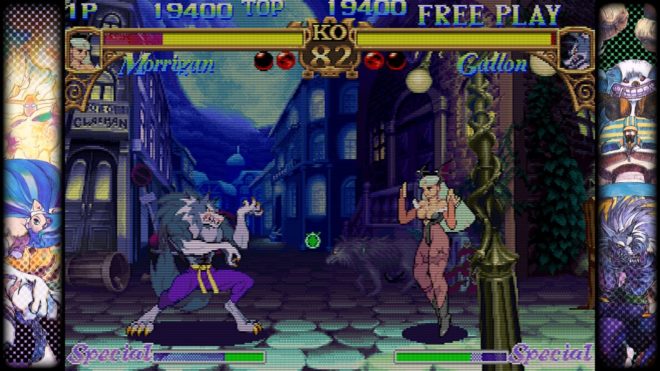 Darkstalker, known in Japan as Vampire, is one of Capcom’s early media franchises, including several fighting games, a 1997 animated miniseries, a 1995 American studio cartoon series, a Canadian comic book series, books, and a Japanese manga series. The Capcom Fighting Collection contains all the games in the series.

Darkstalkers: The Night Warriors, released in 1994 for the CPS II and ported by the Psygnosis team to the PlayStation in 1996, is available in Japanese and Western versions. Ten playable characters are unlocked for players, including the bosses Phobos and Pyron, as well as the iconic catwoman Felicia, Morrigan Aensland, and Demitri Maximoff, whose incarnations you could see in Capcom vs SNK and Marvel vs Capcom. 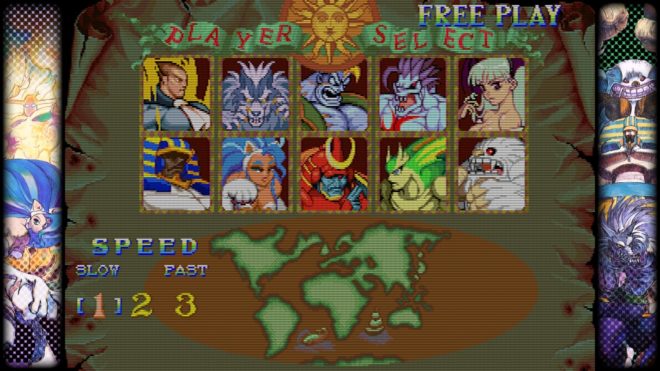 The game uses the combat mechanics developed for Street Fighter II, but with a number of unique features, such as the ability to walk in a crouch position or block attacks in the air. The game has its own special move meter, which must be filled in order to perform special combos or enhanced attacks. 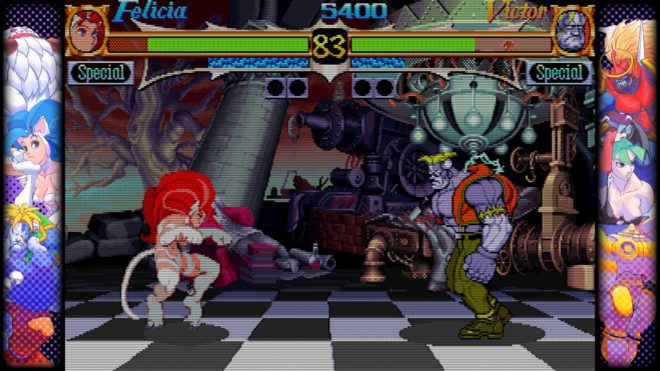 The next game in the series, also available in Western and Japanese versions. The project was released on the Capcom arcades in 1995, a year later it was transferred to the Sega Saturn, and subsequently included in the Darkstalkers Collection and Darkstalkers Resurrection compilations.

Night Warriors: Darkstalkers’ Revenge has two new playable characters – a half-vampire and Donovan Bane, who takes care of a young, supernaturally gifted girl Anita, and Xian-Ko, whose image is based on Jiangshi (Chinese “bouncing” vampire). 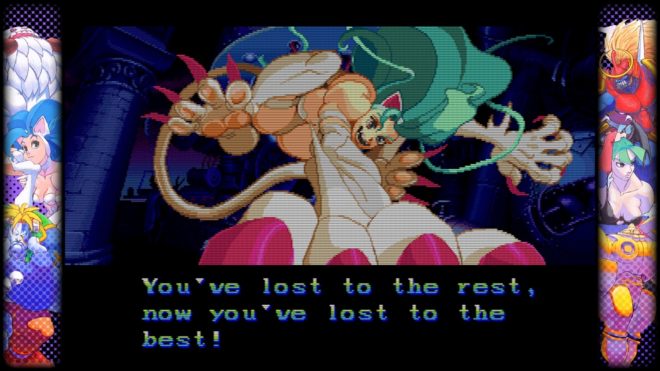 Darkstalkers’ Revenge implemented chain combo attack mechanics and gave players the ability to choose combat styles between classic and auto-block combat. A key new feature is the ability to accumulate Special Move Points by filling up the meter for multiple Special Attacks.

Vampire Savior: The Lord of Vampire 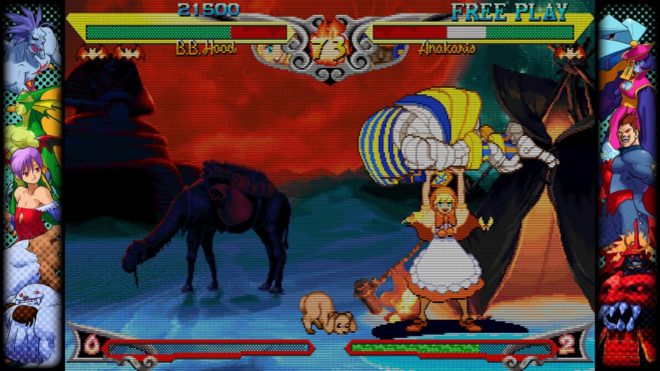 The third game in the series, also known as Darkstalkers 3, was released in arcades in 1997. A year later, ports with unique characters came out for the Sega Saturn and PlayStation, while we got the original arcade version of the project, also in Japanese and Western incarnations.

Donovan Bane, Phobos (Witzil) and Pyron “left” the list of playable heroes of The Lord of Vampire, and four new characters took their place: the demon boss Jeda Dohma, the succubus Lilith, the soul-eater wasp girl QB and the charming B.B. Hood (she is Bullet), whose prototype was the “Little Red Riding Hood”. 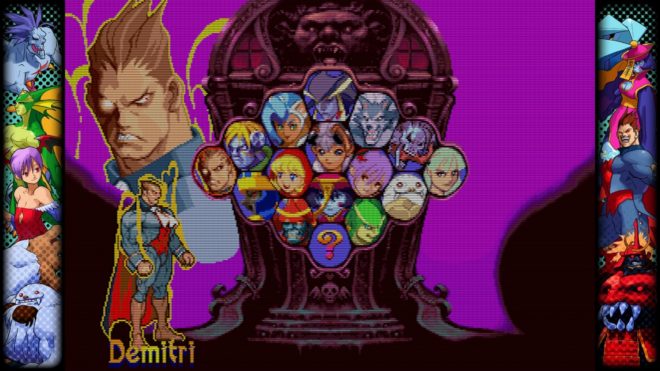 The main changes in Vampire Savior: The Lord of Vampire affected the level system. For more dynamism, Capcom implemented something like a fight for survival – instead of the classic brawls to a certain number of victories, fighters get several health bars and fight until they are completely depleted in a single round. 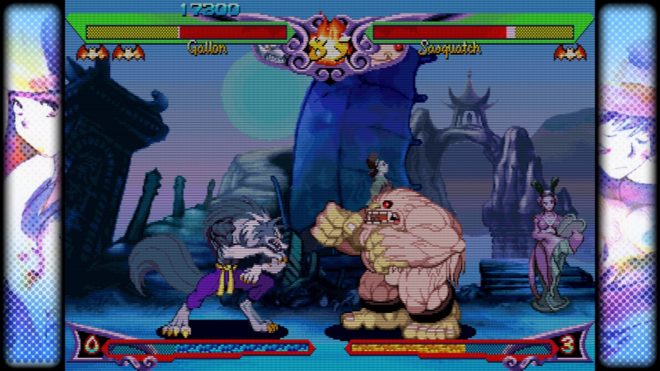 A Japanese exclusive released in August 1997 with a core set of heroes specific to the Vampire Hunter sub-series. The visuals in the sequel are the same, only the color schemes of the heroes, story scenes and some of the levels have been updated, and the classic set of skills is combined with the double health system of the fighters.

Vampire Savior 2: The Lord of Vampire 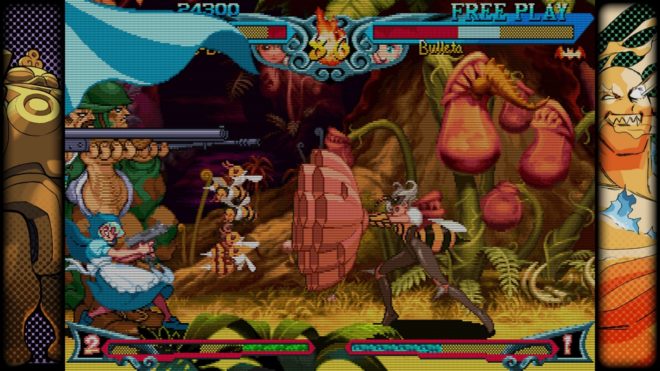 Another game that was not released outside of Japan. Vampire Savior 2 uses the same gameplay and mechanics as the first game, but with a few tweaks. In particular, special attacks for air combos have been abolished, and special attacks (EX Supers) are carried out without reference to specific skills. 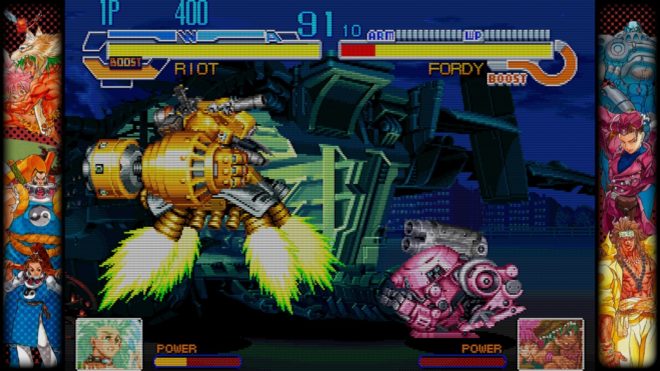 An excellent fighting game and a spin-off to the beat’em up title Armored Warriors, which was released on consoles exclusively in Japan in 1995, and in the West received a limited distribution only on arcade machines, which is why most players have not even heard of Cyberbots.

There are only four playable heroes in the game, but each of them can be put into the cockpit of one of the twelve battle mechs available in the game. With a general recruitment of a team, all cars have unique abilities and super attacks, for which you need to fill the energy meter. 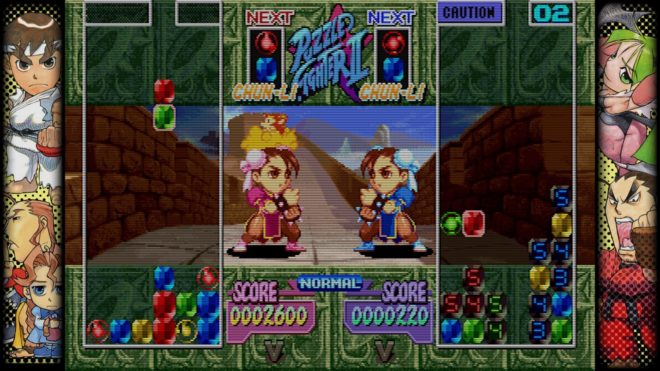 This is not a fighting game, but a competitive puzzle game in which two participants choose characters from Capcom franchises, and while they “fight” each other, collect blocks from the drop-down figures to earn points. There are eight main and several hidden heroes available in the game, including Chun Li, Ken, Felicia and Morrigan. 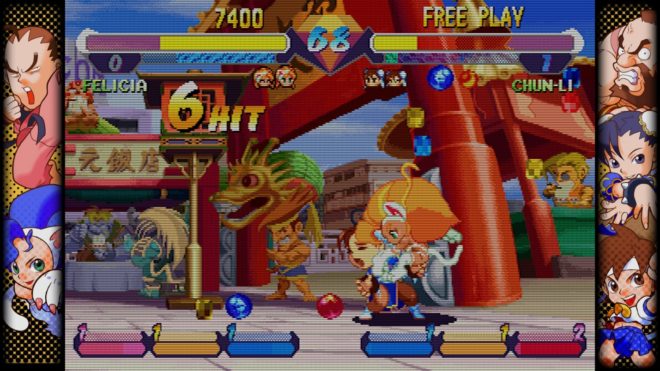 Published for arcades in Japan as Pocket Fighter and released on PlayStation 2 as part of the Street Fighter Alpha Anthology, the fast-paced fighting game with many references to Capcom games brings Super Puzzle Fighter’s caricatured chibi heroes to battle in arenas as a full-fledged fighting game.

Standard fights are complemented by numerous gems, treasures and orbs that are dropped into the arena and can be collected by players during the fight. Modifiers can be used to inflict special moves and combo attacks – the more upgrades a player has, the more powerful combos will be available to him. 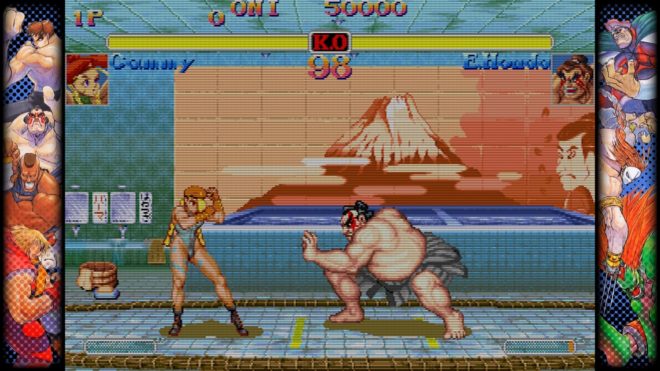 Anniversary edition of the classic Hyper Street Fighter II released on arcades and PlayStation 2 in 2003. The heroes of all editions of the second part of Street Fighter are available to choose from, as well as the ability to choose one of five combat systems and the speed of the match. 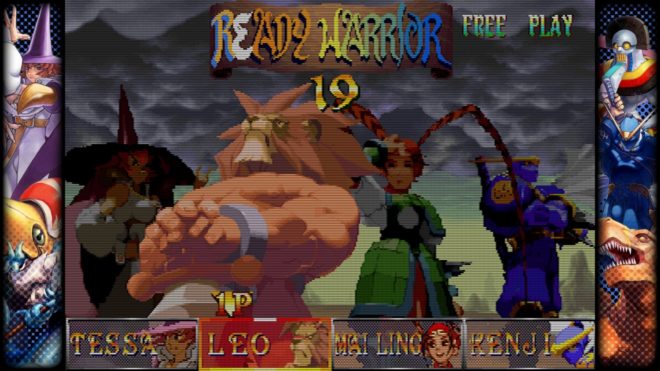 Finally, Red Earth, released in Japan under the War-Zard title. This is an atypical 2D fighting game with amazingly rich (at that time) animations, which for over 25 years remained the property of Capcom arcade machines exclusively.

In addition to the competitive mode, Red Earth features a quest campaign in which the player chooses one of the four heroes of the franchise and goes to fight against eight healthy bosses under the control of AI and during the matches gain experience points used to improve the characteristics of the character and gain access to new moves. 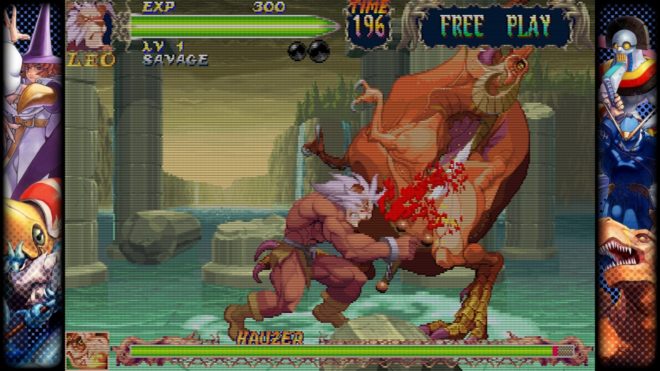 The key difference between the Red Earth combat system and other Capcom fighting games is the presence of modifier items that drop from enemy bosses when dealing a series of hits. In addition, this is one of the few games from the studio where there are dismemberment fatalities and hidden endings depending on the player’s actions.

The Capcom Fighting Collection is a great purchase for collectors of vintage fighting games and just connoisseurs of the genre. The collection is already available on Microsoft Windows, Nintendo Switch, PlayStation 4 and Xbox One.

Games are supplemented with useful mechanics

Too many Darkstalker games

Quake Remastered: the Threewave CLB mod has arrived with a free update