Gordian Quest began to win the hearts of those who like to sit and think over every battle 2 years ago, and even in the state of open beta, it had something to offer. During early access, the number of story acts has increased from 1 to 4, six heroes have been joined by four more, and in addition to the single player campaign, two more interesting modes have become available.

Gordian Quest took from RPG, and from roguelite / like, and from tactical CCG, and even a little from text quests, but if you look at it, then first of all it is an RPG, and only then everything else. Leveling up heroes (yes, we play in a squad), finding equipment for them and its subsequent improvement, quests, choosing and even non-aggressive grinding come out on top, but sometimes you completely forget about collecting cards and the fact that after a defeat you will return to the beginning . In addition, the permanent death of roguelikes is optional – if you choose an easy level of difficulty, then it is not. 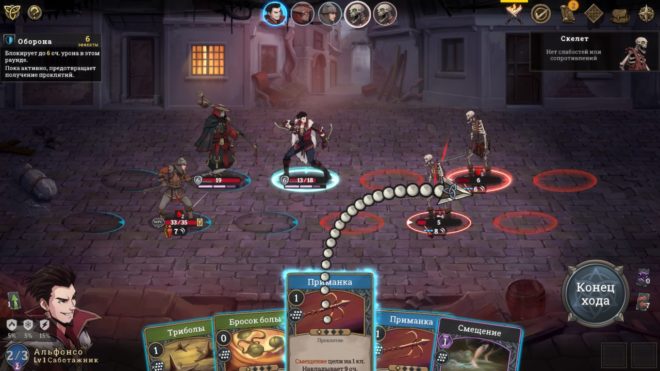 Gordian Quest is able to easily scare off the wealth of mechanics, famously intertwined into a single gameplay – this can already be understood at the stage of choosing a hero, of which there are 10, and each personifies a certain class.

The notorious swordsman, ranger and caster are diluted with a golemant, a blood mage, a monk, a medic and a number of other personalities, thanks to which it will not be easy to decide. True, you can’t customize the characters, but they are so well drawn that you don’t worry about it. 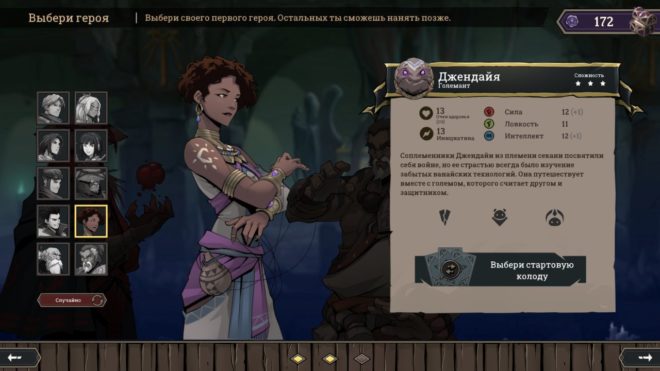 But this is only the beginning, as the hero is offered to choose one of four sets of cards, which will determine his role. The same swordsman can become a duelist, veteran, tactician, or remain a swordsman, and a ranger can become a ranger, sniper, hunter or artilleryman. Each specialization changes health points and initiative, as well as three main characteristics – intelligence, agility and strength. Needless to say, the scope for creating your favorite builds is more than wide?

The role predetermines the starting set of cards available to the character, which deprives the player of the need to build a deck from scratch in adventures or, God forbid, from paid chests. That is why the mechanics of the CCG is inferior to the role-playing one – most of the cards are already available, and you will have to get them less often than pump them.

The cards differ in colors – there are red, green and blue, and they depend on the characteristics of the character. A mage with high intelligence will be wary of using blue cards, but red cards from his hand will cause nothing but laughter. In total, there are more than 700 cards in Gordian Quest, and among them, according to the classics of the genre, there are attacks, defenses, buffs / debuffs, and stuff like that.

Feeling the power of Gordian Quest? We haven’t started the adventure yet, and we’ve already been loaded with so much information. But we don’t give up and move on.

The game currently has three modes – this is a single adventure, divided into 4 acts, a “royal” mode and network PvP in a duel format. With the latter, everything is clear, “royal” is not a battle, but a test in the style of a classic bagel with a branching card. The mode is just as interesting as the campaign, but we will not linger on it so as not to reveal all the charms of the game. 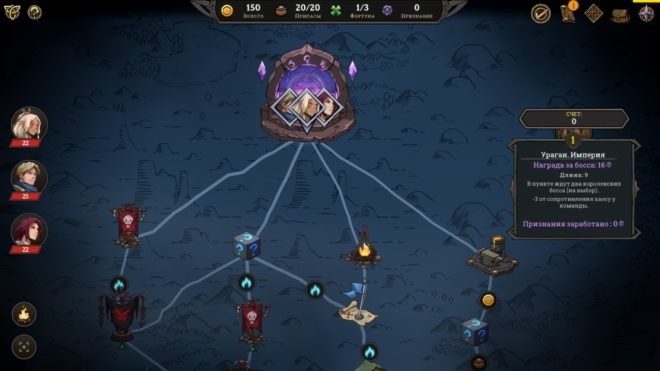 The storyline campaign offers heroism in four locations in a fictional fantasy world where everything is not going according to plan – the undead are storming the city, sandworms are terrifying only by their appearance, and in a floating and beautiful city, powerful guards are not at all welcome … to anyone. Each act will take approximately 4-5 hours of real time, they are not plot-related to each other and offer their own stories, tasks, heroes, mechanics, relics and NPCs.

In each such act, we will have a city of refuge, similar to the hub from Darkest Dungeon – here you can visit the tavern and relax, restore health to the fighters, look at the blacksmith, herbalist and other NPCs. In general, a place where you can upgrade, replenish your strength, and at the same time extend the list of quests. At first we travel alone, but later other heroes will join the squad – in total, you can take up to 2 satellites at the same time. 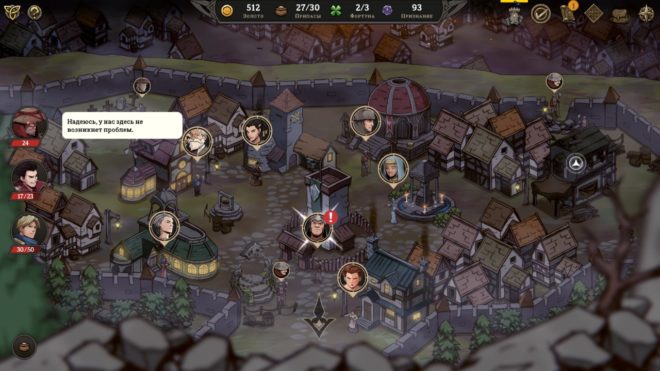 Behind the safe haven is a bunch of points of interest, which are battles, dungeons and random events. Although there is no single plot in the game, and the characters are mostly silent, there is no feeling that we are marking time on the spot for fun – so, in the first act, we will first clear the city of the undead, then we will protect its walls, and then we will go in pursuit of the main reptile around the neighborhood. The territory is gradually expanding: there are new places to visit, so there is no need to be bored here. 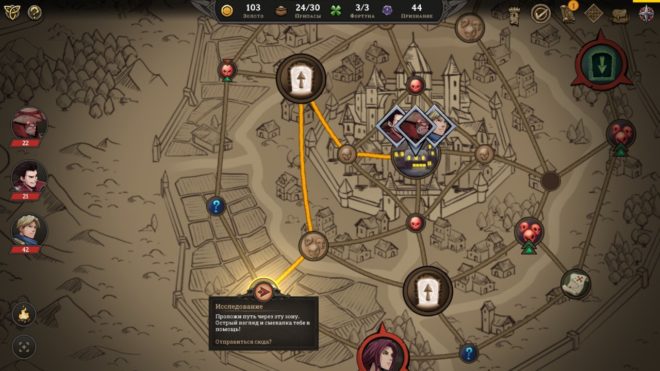 It’s worth talking about the combat system right away – it’s here like in a strong tactical RPG. There is a field divided into cells, all actions are performed with the help of cards, the intentions of the enemy are known in advance – it remains only to study everything and not do stupid things. Heroes can apply Bleeding, Weakness, and a bunch of other negative effects that can be turned into a ton of damage if used properly. True, it also works in reverse. 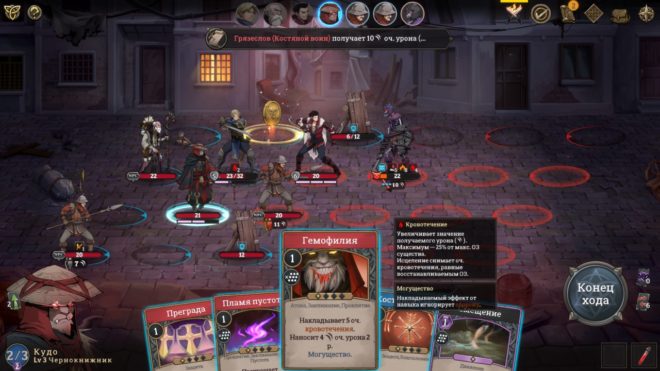 Combat is only part of what Gordian Quest has to offer. Then there are dungeons, and they are really dungeons with multiple levels and rooms that can hide treasures, enemies, or events. Moreover, there is another type of dungeon in the form of a mini-game, where you indicate the path for the heroes with dots on a parchment map, and then watch how they go through it and stumble upon all sorts of events.

There is a semblance of text quests – mini-stories that we often stumble upon in an adventure. They are non-linear and use D&D’s “dice check” mechanic – to get a reward in an event, you have to knock out a certain number of points by rolling a twenty-sided die. Moreover, one of the three characteristics is checked, and characters that are strong in one event will be weak in another. However, you can donate a card and add bonus points, but then it will be blocked. 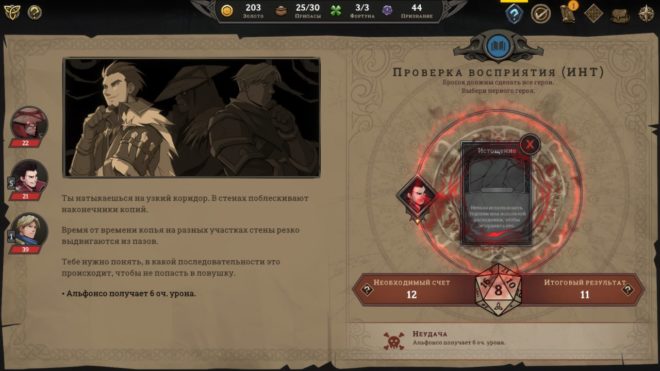 Even resting in the camp is not just a mini-game, but a separate mechanic. The pass lasts 12 hours, and you decide what the members of the squad will do every hour – they can improve their skills, skip a mug of intoxicating to replenish health and do something else. 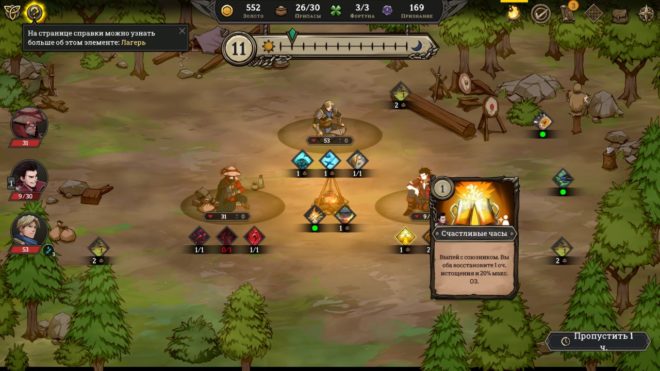 I thought that the developers would stop there, but no – after a short trip, I got acquainted with an interesting pumping system that offers to build a skill tree on my own. That is, we add our own skills to the basic block with skills, and we ourselves decide which side to attach them to.

Loot is also a whole story. The found items are divided by color by rarity, and they not only improve the characteristics of the hero, but also contain bonus cards for the deck. Moreover, they may be useless for assembly, because of which you will have to think whether this thing is needed at all. Items have gem slots, which, you know, opens up even more possibilities.

The fact that the game quickly reveals its cards and shows how cool it is has a downside – after about 5 hours of playing, you understand that it will not surprise you further.

But I would not consider this a disadvantage – a titanic work has been done on the project, the variety of game mechanics does not fit in my head, and in the meantime, hours fly by unnoticed, because this is not a run before going to bed, but a whole adventure from which it is difficult to break away. I didn’t tell everything – I suggest you learn about other features personally, the game is worth it.

Every activity found in the adventure is worked out

A leveling system where we create our own skill tree