Prior to the development of the first part of Horizon, the Dutch studio Guerrilla Games was engaged in first-person shooters from the Killzone series, and even earlier released the action film about the Vietnam War ShellShock: Nam ’67.

After the release of Killzone 3 in 2011, while working on Killzone: Shadow Fall for the PlayStation 4, game developers from Guerrilla Games decided to take a chance and develop something fundamentally new, different from the FPS genre that had set the teeth on edge (it’s no joke, the studio released 6 first-person shooters for 9 years).

Something new was Horizon Zero Dawn, which combined third-person combat, stealth, leveling, and rudimentary parkour. The authors decided to create a setting in which primitive tribes, robo-dinosaurs and Forerunner technologies existed at the same time, tying it all into a post-apocalyptic story about the fall and rebirth of mankind. The lead writer of Fallout: New Vegas worked on the story, so there were no problems with creating a coherent storyline.

Decima, Guerrilla Games’ own development for Killzone: Shadow Fall, was chosen as the engine. Initially created for a first-person shooter, the engine caused concern among game developers: they were not sure that it would cope with drawing an open world and quickly loading locations. Nevertheless, the developers managed to rise to the challenge and rebuild Decima to match the technical requirements of the new game. 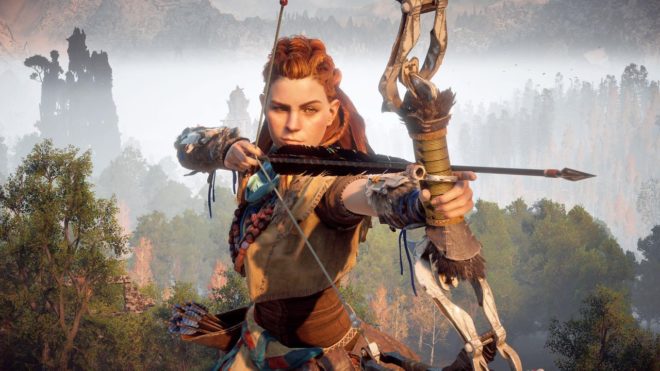 Horizon Zero Dawn was released in 2017 on the PlayStation 4. The main character was the girl Aloy, who was expelled from her tribe as a child. She was raised by the same outcast Rust, and once found outlandish augmented reality device gave her information about the world around her that was hidden from others.

Of course, Aloy was born for a reason: she was destined to become a participant in the events on which depended – neither more nor less – the fate of all mankind. Well, the players were waiting for an exciting adventure with hunting for dinosaurs, battles with fanatics and revealing amazing secrets of the past. The developers competently compiled the gameplay elements of different games, so Horizon Zero Dawn resembled The Witcher 3 Wild Hunt, Assassin’s Creed games, Tomb Raider, and other titles. At the same time, the unique setting and the memorable main character provided the project with its own face. 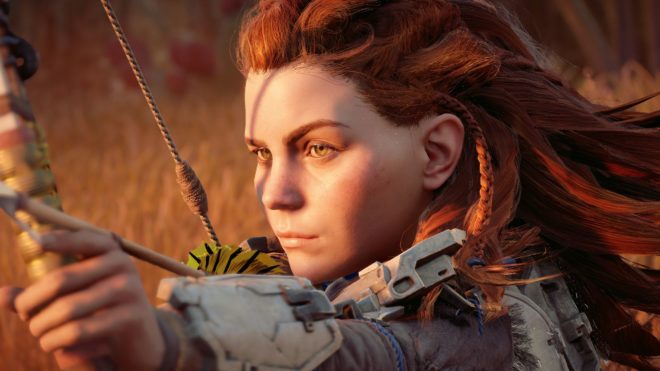 At release, Zero Dawn was a huge success. In its first days on sale alone, the game sold 2.6 million copies, making it the fastest-selling new IP on PS4. Within a year, sales of the title reached 7.6 million copies, and by the second anniversary since the premiere, the circulation exceeded 10 million copies. And this is only on one platform – the game remained exclusive to the PlayStation 4.

Ratings were not far behind: “eights” and “nines” from reputable publications, positive reviews from players, as well as many awards, including “Best Playstation Game” at the Game Critics Awards 2017, “Outstanding Story Achievement” and “Outstanding Technical Achievement” at the DICE Awards 2018, “Best Original Game” at the British Academy Video Game Awards 2018. Such success meant only one thing – to continue to be. 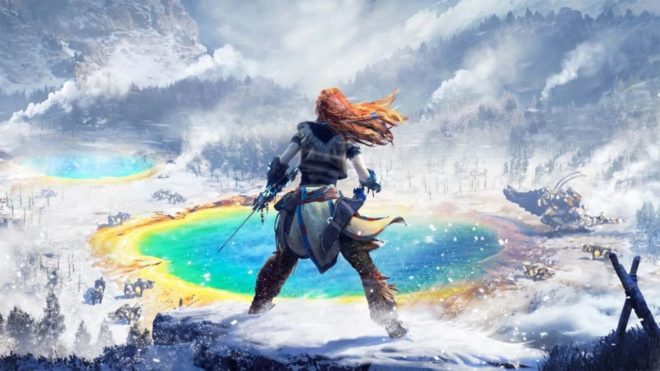 And it was not long in coming: in the same 2017, the release of a major addition to The Frozen Wilds took place. Its plot seriously expanded the story of the original game, gave answers to some questions (and left new ones), and also opened up a new large-scale location for gamers, cold and snowy.

Guerilla Games didn’t stop there. In 2020, Horizon Zero Dawn was released on PC, where it received high ratings, although in the first weeks of release, the joy of computer users from the opportunity to try out the former PlayStation exclusive was overshadowed by the technical problems of the PC version of the game.

In addition, graphic novels and a board game based on the Horizon series were released in 2020 and 2021. The comics focus on the adventures of the original game’s secondary characters; “tabletop” is designed for 1-4 players who travel the world, hunt down and destroy cars, earning resources, experience and fame. The accompanying content is considered canonical to the Horizon Zero Dawn world; it is not necessary to get to know him, but fans of the series will certainly not mind immersing themselves in their favorite universe. 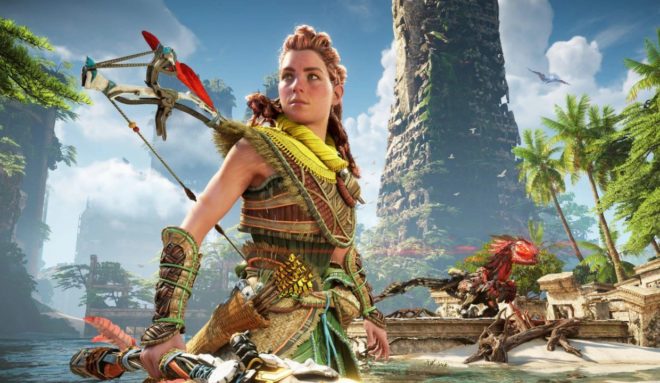 At the presentation of the PlayStation 5 console in June 2020, a sequel called Horizon Forbidden West was announced. The game was originally announced as a PS5 exclusive, but Sony later announced that it would also be released on PS4.

Forbidden West continues the events of Zero Dawn. Shortly after defeating the enemy in the first part, Aloy goes in search of technology that will help stop the impending end of the world. Despite the fact that the count goes on for weeks, the girl has to slow down her journey to the unknown Forbidden West, getting involved in the strife of local tribes. Moreover, a third party appears – a previously unseen enemy with incredible power.

Horizon Forbidden West has become larger, richer and more beautiful than its predecessor. The developers improved gameplay mechanics and game systems based on feedback from players, and the writers wrote a compelling storyline that upped the ante and confronted Aloy with danger that made the events of the original game seem insignificant. Moreover, the ending of the story showed that this is only the starting point before, probably, the final third part. Although the triquel has not been officially announced (as of summer 2022), it is definitely in development.

Given the work on the bugs and the increased quality of the sequel, Horizon Forbidden West, according to many critics, can claim the title of the best game of 2022. The title was praised in every way, from graphics and script to gameplay and performance on both the PlayStation 5 and PlayStation 4: the previous generation platform did a good job with the novelty. Good sales were added to the high ratings, although the sequel started worse than the original game.

Expanding the Horizon series, Sony has announced a new part called Call of the Mountain, which is created specifically for the PlayStation VR2 virtual reality helmets.

This is not a direct continuation, but an offshoot of the main line. The main character will be a new character named Raias, who will go on a journey to stop some deadly threat and atone for the sins of the past. At the same time, Aloy and other characters familiar from the previous parts will look into the game.

Horizon: Call of the Mountain is designed for VR devices, so it will provide a complete immersion in what is happening. Accordingly, the controls will be optimized for PSVR2, and the developers promise a real attraction, in which the protagonist will fight dinosaurs, climb rocks, and master various weapons. The release of the game will take place in 2023, along with the launch of a virtual reality headset. 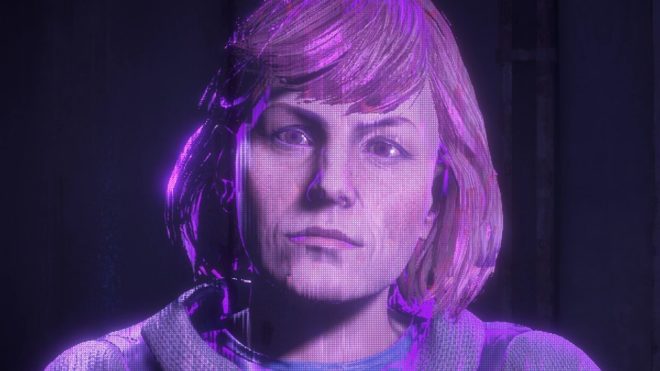 In 2022, Sony also unveiled a series based on the Horizon series. It will be produced by Netflix, and according to unconfirmed reports, it will be called “Horizon 2074”, which hints at the time period in which the events will unfold, and at the characters that we will see – fans of the games of the series are familiar with them in absentia.

However, at the moment there is no information about the actors, showrunners, release dates of the series. We are waiting for details from Sony and Netflix. 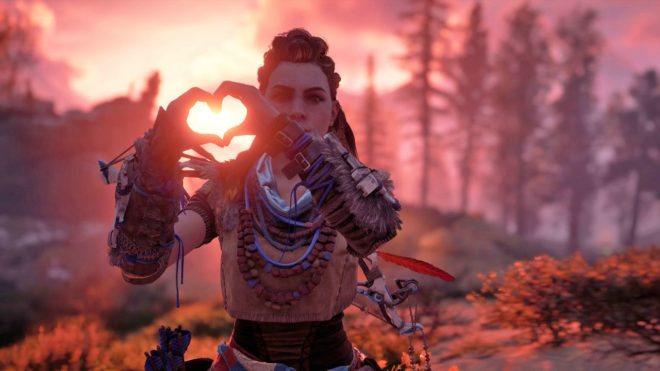 That’s all there is to the Horizon series for now. There is no doubt that it will develop, which means that it is too early to put an end to the adventures of Aloy and her friends, and we will definitely return to the amazing post-apocalyptic world, incredibly beautiful and deadly.

“We are for inclusiveness”: NexusMods commented on the removal of mods for Spider-Man

Roskomnadzor will spend 57.7 million rubles on the development of the Oculus system to search for prohibited information in Runet

The creators of Medieval Dynasty promised a cooperative mode