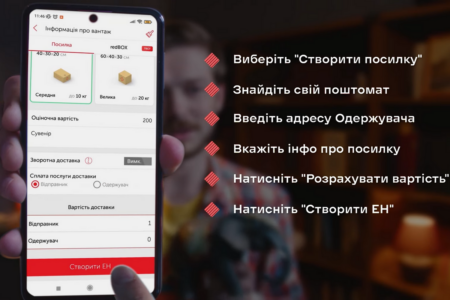 Nova Poshta announced the expansion of the availability of the service for sending parcels to post offices – you can already use it in 5 Ukrainian cities.

This service was launched two weeks ago in Kyiv in test mode. And now, after testing, Nova Poshta is expanding its availability – from today, customers can send from the company’s parcel terminals in Kyiv, Lviv, Odessa, Dnipro and Poltava, and from July 18, the service will also become available to residents of Vinnytsia. You can send from the post office throughout the country: to another post office, branch or address of the recipient.

Until August 31, there is a promotion at the cost of the service. It depends on who pays for the delivery of the parcel: if the sender – 35 hryvnia, and if the recipient – 50 hryvnia. Documents are sent through the post office and office at a fixed rate of 45 hryvnia, which already includes an envelope.

Update the Nova Poshta mobile application so that an additional sub-item of the place of dispatch appears in the Create Parcel section – a post office. Create your own electronic waybill for sending in the application. Pack the shipment yourself at home. Go to the post office with the parcel, open the created waybill and click “Open box”. Put a packaged item without marking in the cell. Confirm the download in the mobile app. Close cell.

After the client confirms that the parcel has been loaded into the parcel terminal, the dispatcher automatically receives a notification of the arrival of a new parcel and sends a call to the courier to pick up the parcel. As soon as the courier opens the cell, he checks the packaging, and then prints the label through a special mobile device and sticks it on the parcel. Further, the parcel is sent to the sorting depot, where further distribution by region and destination takes place.

The courier arrives at the post office several times a day until 18:00. If within 24 hours after the creation of the electronic invoice, the client does not put the parcel in the parcel locker, the system will automatically cancel the electronic invoice. In the case when all the cells of the selected parcel terminal are occupied at the time of the invoice creation, you can select another nearest parcel terminal with free cells.

What can be sent?

Through the post office, you can send and receive any parcels weighing up to 20 kg containing books, documents, shoes, toys, dishes, cosmetics, clothes, and small household appliances. Nova Poshta does not limit the number of parcels sent through a parcel terminal at a time, but there is a clear rule – no more than one shipment per box.

It is forbidden to send

Cannot send money, securities, weapons, animals, insects, food products, medicines and other items with a shelf life of up to 5 days and requiring a certain temperature regime, items that are dirty or with a strong odor, drugs and other things prohibited by the current legislation of Ukraine .

How to pack a parcel for sending from a post office?

Packing requirements are normal – according to the rules of the company. Secure, undamaged boxes, document envelopes and clothing bags up to 2 kg must be used. It is important to carefully pack the fragile, but if the client has packed it incorrectly, the courier will securely pack the shipment.

And you can also remember Box Master – an online packer simulator from Novaya Poshta, which teaches you how to pack a shipment properly.