Today’s publication of the official explanation of the General Staff of the Armed Forces of Ukraine on Facebook regarding the restriction of the movement of persons liable for military service on the territory of Ukraine – a ban on leaving the place of residence without special permission from the TCC – made a lot of noise. It would seem that the clarification of the adviser to the Commander-in-Chief of the Armed Forces of Ukraine and the comment of Valery Zaluzhny himself leave no doubt that no permits will be needed. But now another explanation has appeared, from which it follows that in order to travel outside the region, those liable for military service must obtain permission from the TCC and the joint venture.

Update on the situation with the movement of conscripts in Ukraine

The fact that in order to travel outside the regions, those liable for military service must obtain permission from the TCC and the joint venture, was confirmed by the representative of the Main Directorate of Personnel of the General Staff of the Armed Forces of Ukraine, Colonel Oleksandr Khlys on the air of the national telethon, answering questions from journalists.

quotes the words of an officer of the Communications Department of the General Staff of the Armed Forces of Ukraine in FB. 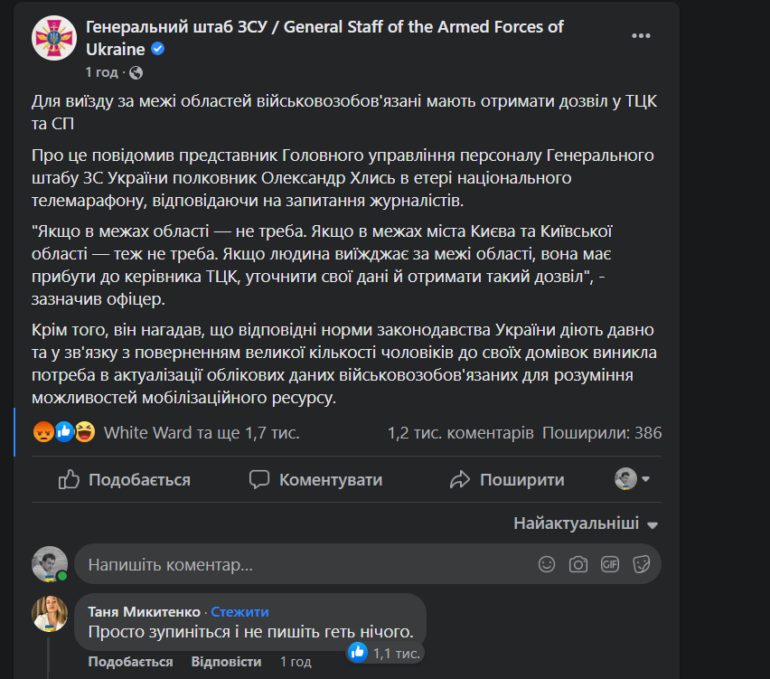 Oleksandr Khlys recalled that the relevant norms of Ukrainian legislation have been in force for a long time, and in connection with the return of a large number of men to their homes, there was a need to update the credentials of those liable for military service in order to understand the possibilities of the mobilization resource.

“We have a common policy of the state – this is a “country in a smartphone”. And, of course, including such an issue as the registration of those liable for military service, in the future, at least in the first steps, it can also be partially transferred to a digital mode using Diya,” Motuzyanyk said.

Earlier, the Ministry of Digital Resources assured that no one would hand over military summonses through Diya, but suggested that in the future a military ID might appear in the application. In fact, this is no longer news, but only a confirmation of intentions – at the end of 2021, the issue of creating a Unified State Register of conscripts, conscripts and reservists (Military ID) and implementing a set of relevant services on the Diya portal was raised.

Military ID: “Dії” has the opportunity to register conscripts, military recruits and reservists for the paper document

Apple began filming the presentation of the iPhone 14

Italian Video Game Awards 2022: all the prizes awarded to the event

GTA 4 and Red Dead Redemption remasters will come out, but only after GTA 6

Bitmain still released a miner with a performance of 25 GeForce RTX 3080. Apparently too late