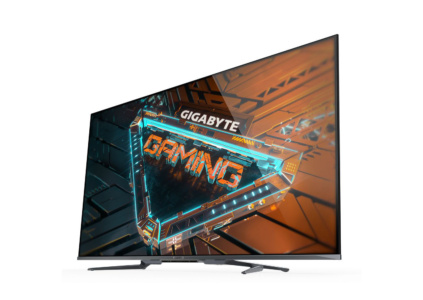 Gigabyte has announced the release of a new large-format gaming monitor AORUS S55U. The novelty is made on the basis of Quantum-Dot technology, contains a VA matrix and 132 local dimming zones.

The Gigabyte AORUS S55U gaming monitor has a diagonal of 54.6 inches and a resolution of 4K. The device also features an image refresh rate of 120 Hz and a 2 ms sensor response time when switching between grayscale. Typical image brightness is 500 cd/m2, peak brightness is 1500 cd/m2, contrast ratio is 5000:1. The monitor provides coverage of 96% of the DCI-P3 color gamut. The novelty is equipped with two HDMI 2.1 connectors, two HDMI 2.0 connectors, USB 3.2 and USB 2.0 ports, headphone jack. The device also has two speakers with a power of 10 W each, a network connector, Wi-Fi and Bluetooth wireless modules. With built-in Android OS, users can run YouTube, Netflix and Chromecast apps to stream content.

The recommended retail price of the Gigabyte AORUS S55U gaming monitor has not yet been announced.

Rumors: Huawei will introduce a new folding smartphone Mate X3 before the end of 2022

Forspoken postponed, the Square Enix game for PS5 and PC is released in 2023

In League of Legends, due to global inflation, the value of the currency will skyrocket, but not in Russia and the CIS