Funcom and The Outsiders are teaming up with gamescom and Level Infinite to dedicate an entire hall to the massive Metal: Hellsinger concert, featuring performances by world-renowned metal artists.

Metal: Hellsinger, the metal-rhythm shooter from publisher Funcom and developer The Outsiders, takes the stage at gamescom on August 25th. Some of the celebrated singers will perform their songs from the game during the biggest live concert in gamescom history. The songs themselves are penned by the Swedish duo Two Feathers. The epic fusion of music and game starts at 7 p.m. and will be streamed live. 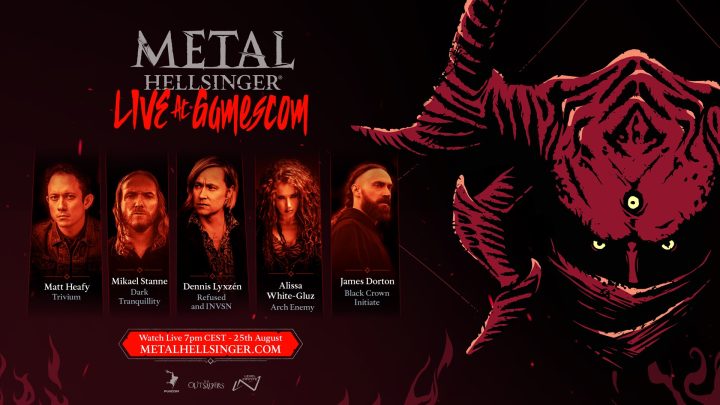 With more than a million demos downloaded and the game rapidly climbing the Steam wishlist, Funcom and The Outsider are taking it one step further.

Some of the metal icons who each perform a song in the game will perform live at the concert. These include Matt Heafy (Trivium), Alissa White-Gluz (Arch Enemy), Mikael Stanne (Dark Tranquility), Dennis Lyxzén (Refused/INVSN) and James Dorton (Black Crown Initiate).

The gigantic event is free and open to thousands of people, as an entire hall is reserved for it. The first 200 gamescom visitors will receive a bag with exclusive Metal: Hellsinger merch. Even more fans can follow the spectacle in the live stream. Details on this will be announced at a later date.

In Metal: Hellsinger, the gameplay experience becomes more and more intense as players slay to the rhythm. The music unfolds in layers as you fight your way through hordes of demons until ending in the throbbing vocals. Players plunge into the fires of hell in search of revenge.

Metal: Hellsinger is coming to Steam on September 15th for PlayStation 5 and Xbox Series X|S. Pre-orders for the console versions are already possible. The extremely popular demo is available on all platforms.

The trailer for the concert:

Every Thursday gamescom ticket holder can attend the show for free.

= Partner & affiliate links: Possible listed offers are usually provided with so-called affiliate links. With a purchase through one of these links you support Xboxdynasty. Without affecting the price, we receive a small commission from the provider and can offer this website to you free of charge.
Tags: announcesbiggestconcertFUNCOMgamescomHellsingerHistoryMetal

Apple Watch Series 8 will not get a new design

First teaser trailer for fan-made series based on Star Wars: Knights of the Old Republic