Failure at the start. Dnepr-1 did not keep a draw in the match with AZ Alkmaar

Dnipro “Dnepr-1” could play in the tournament, which is listed above, but due to the elimination in the last round of qualification from the Cypriot AEK, they had to be satisfied with participation in the group stage of the Conference League. In the starting round, Kucher’s wards were opposed by the Dutch AZ Alkmaar.

For the game, which took place in the Slovak city of Kosice, the Dnipro head coach put up a rather interesting squad. The position of Sarapiy was striking (he played in the center not of the field, but of defense), the presence of the young Rubchinsky on the field and the absence of even Blanco in the application. The rest of the positions did not raise questions.

It was expected that Dnepr-1 would not force things, but would give the initiative to the opponent in the hope of counterattacks. And the expectations came true – the game began from their gates in the hope of a mistake by the Netherlands. Already traditionally in European competition Valef could bring problems, but Adamyuk backed up his goalkeeper in the opening game after a mistake at his own goal. 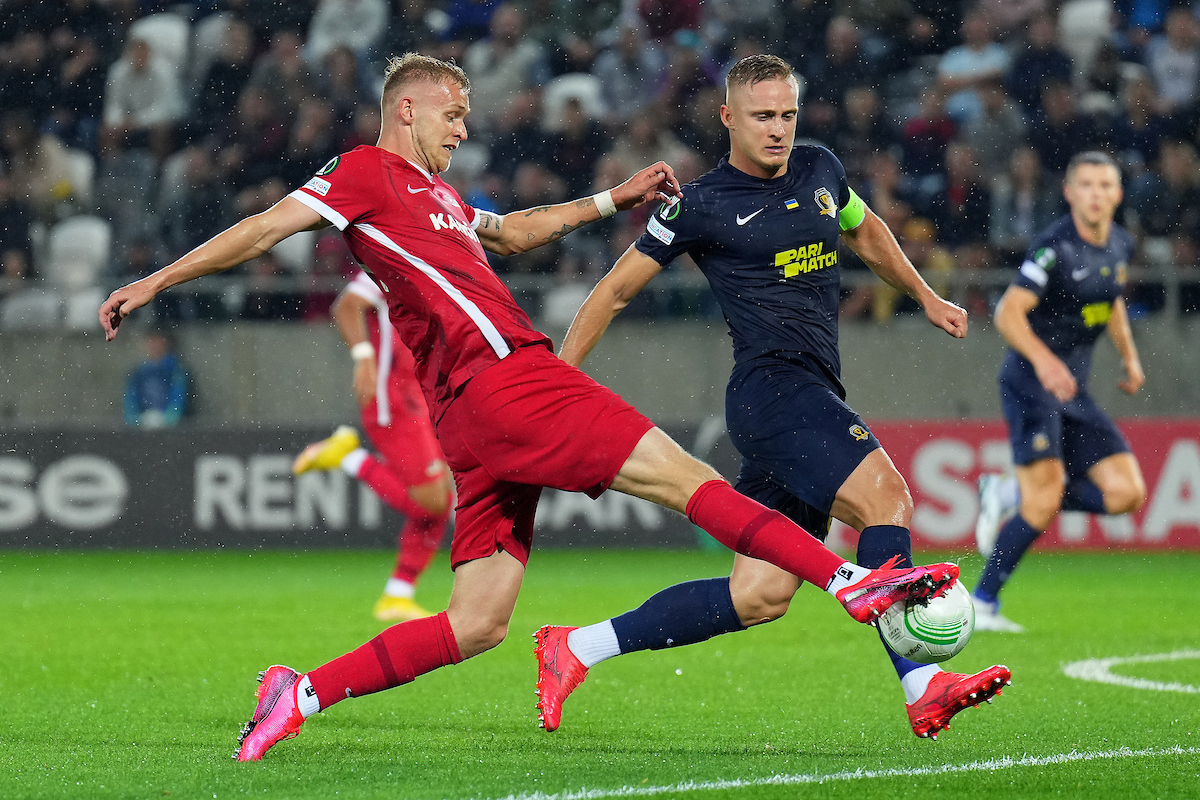 Somewhat unexpectedly, a scoring chance arose at the gates of AZ Alkmaar. After Dovbik’s cross on Gutsulyak, the defender decided to intervene in the episode. If he had hit a few centimeters more accurately, the score would have been opened, and so the post saved the guests.

This moment is rather an exception to the rule. Nothing else like this could be created in the first half by any team – the defenders coped with crosses and crosses. Therefore, the teams went to the break with a natural goalless draw. It was hoped that the second half would be more spectacular.

Starting minutes of the second half became a logical continuation of the first half. The guests attacked, the Ukrainians fought back, but nothing critical happened on the field. We even managed to shoot – on 54 minutes Gutsulyak responded to a long throw from the left and headed from 10 meters into the hands of the goalkeeper. But the low activity had an objective reason – heavy rain made it much more difficult for both teams to play in attack.

Could “sportklubovtsy” and miss. And again there were questions to the goalkeeper – Odgor on the right, apparently, still did not unsuccessfully hang, but purposefully hit from an acute angle, seeing that the keeper had gone far out of the gate. It was lucky that Valef moved the ball to the crossbar with his fingertips.

However, it was possible to delay the capture of their gates by just a few seconds. After a cross from the right flank from Sugawara, none of the defenders prevented Dani de Wit from shooting Valef from a few meters. A question to the Brazilian goalkeeper in this episode would be inappropriate – he could not do anything. 0:1.

To save the situation, Kucher released Nazarenko, who replaced the passive Amash today, and made his debut for Dnepr-1 Baluli. However, they almost conceded another goal – after a corner, the defenders simply watched the ball fly past the far post after a shot from the goalkeeper’s line from an AZ Alkmaar player.

Neither these substitutions nor others even came close to equalizing the score. Moreover, they could have conceded more, but Valef saved by parrying two blows in a row in one attack.

0:1 – perhaps a well-deserved score. The game turned out to be frankly poor at times. If in the UPL SC Dnipro-1 looks pretty good, then in European competitions the situation is, to put it mildly, diametrically opposite.

In a parallel match, Vaduz and Apollon played in a goalless draw. It is with the latter that Dnipro-1 will play the 2nd round match in a week.

Source: another European top club set their sights on Mudrik

No chance. France destroyed Poland on the way to the EuroBasket final

So injured or not? Arteta is not sure that Zinchenko will miss the Premier League match