Return to the Night City of Cyberpunk 2077

Return To The Night City Of Cyberpunk 2077

Well yes, even if it doesn’t seem like it’s been almost two years since Cyberpunk 2077 made its debut on the PCs and consoles of millions of gamers, and we are sure you remember that day one very well. Certainly there is no need to make a detailed summary of the “Cyberpunk story”, but it is worth mentioning the fact that players linked to eighth generation machines found themselves faced with an unacceptable production, while on the front of the most performing platforms many others enthusiasts were disappointed by a work unable to keep the unattainable promises made with zeal over the years.

Despite the justified anger, and despite the aftermath of this situation, there were two qualities that even then it would have been impossible to take away from Cyberpunk 2077. The first resided in Night City, a magnetic, blinding, labyrinthine city, populated by characters they knew. few equals in other open world video games. The second, on the other hand, was represented by the extraordinary imagery of Mike Pondsmith, capable of giving life to the operating rooms of ripper-docs, to the tower on which the Arasaka logo shone, to cyber-psychosis, to the cybernetic grafts of the Scavs as well as to figures legendary of the likes of Adam Smasher.

To dispel any doubts in this sense, the animated series Cyberpunk Edgerunners produced by studio Trigger – already known for Kill-la-kill and Sword Art Online – and published on Netflix, the platform on which it has established itself among the most viewed and appreciated in absolute; just think of the fact that the song “I REALLY WANT TO STAY AT YOUR HOUSE”By Rosa Walton and Hallie Coggins has conquered the top of Spotify’s Viral rankings, abroad but also and above all in Italy where it still reigns supreme as further evidence of the show’s success. 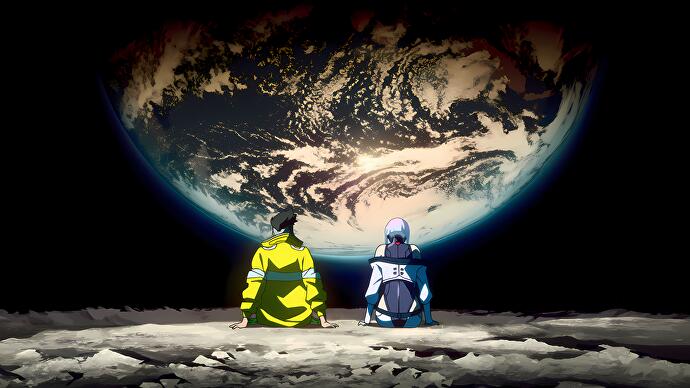 The Edgerunners series was enough alone to make Cyberpunk 2077 the most played game on Steam two years after its launch.

And as has already happened on the shores of The Witcher – and as it probably will also happen on those of The Last of Us or Horizon Zero Dawn – the love for the story staged by the TV series has prompted millions of gamers to brush up on the CD title. Project RED to give a second chance to the adventure of mercenary V after having adored that of David Martinez. For their part, the developers have not failed to capitalize on television success, taking advantage of the latest patch to introduce objects, references and missions that wink at the Netflix adaptation.

But we have already dealt extensively with the relationship between the Edgerunners series and the videogame work in a dedicated article. Today we are here because we too, like hundreds of thousands of other fans, have thrown ourselves back into the streets of Night City, trying to find out if and how much the face of Cyberpunk 2077 has changed two years after the original launch.

And yes, it must be said right away, some wounds have never healed and will probably never heal: the initial mission “Il Colpo” is still a mouth watering that will never be satisfied, presenting a variety of options, approaches, of interactions that will no longer be reflected in the progress of the story. Likewise, you have to make peace with the fact that CD Projekt’s work is not an immersive simulator in the strict sense, does not have an extraordinary variety in gameplay, and does not come close to the technical expertise that characterizes Rockstar’s open-world citizens. Studios.

In short, Cyberpunk 2077 is not by resonance the “Skyrim Cyberpunk” that many expected, perhaps seasoned with an inspiration of the played beyond Deus Ex, capable of unfolding in an open world always available for dialogue, for interaction, for hard and pure role-play. Nevertheless… 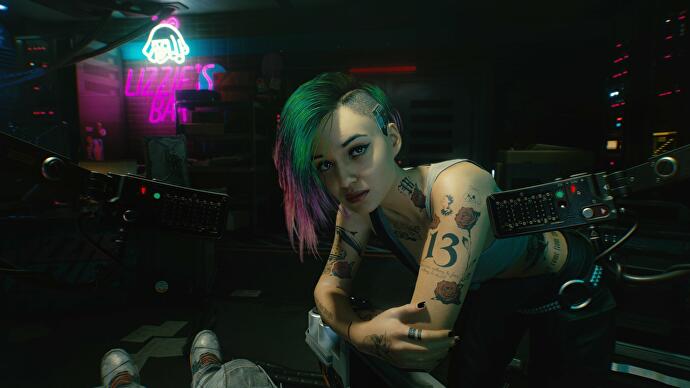 Cyberpunk 2077 manages to make the passage of time weigh in interactions, as rarely happens in works of this scale.

Yet Night City, with its brutalist shapes and psychedelic colors, with colorful characters and disturbing intertwining, has and will always have all the credentials to capture the player in its magnetic spell. In the story of a character, the mercenary V, who becomes the vector through which the lives, dilemmas and tragedies of others are staged, and who dips his feet – albeit always remaining close to the shore – in the ocean generated by the fantasy by Mike Pondsmith.

Net of the criticisms that can still be moved to Cyberpunk 2077 – which probably remains the easiest video game to criticize and attack of all time – some elements survive that know rare comparatives in the medium. Such as the relationships with the supporting actors, those exchanges with figures such as River Ward or Panam Palmer, interactions that experience a real evolution over time that passes through the story narrated and opens up in a smile in front of a trivial SMS received on the game phone. .

Or the decidedly more contained plots that place V in front of the death row inmate Joshua Stephenson in the “Sinnerman” mission, or even the Peralez spouses in the “Dream On” side-job, stories that slightly push the veil of this first work aside, making us see for a few moments what could have been the central themes of a hypothetical Cyberpunk 2077 ideal.

All this survives, and manages to do so because of what is at the same time the great strength and the condemnation of the project: being an immersive RPG set in an open world. In fact, no one had ever tried to enclose in the casket of the role-playing experience an open world characterized by a powerful narrative, an exaggerated technical question and a typically cinematographic staging; and it is probable that no one had ever tried it precisely because they knew that it would be too difficult to grasp such a result. 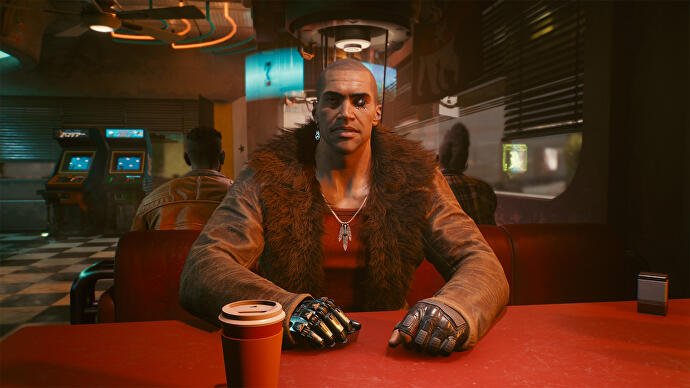 There are no other open-world RPGs that have pursued such a level of technical care for sequencing and design.

In short, Night City is always Night City, “Pacifica is always Pacifica”, but how does the experience behave two years after the launch? The first thing to say – unfortunately – is that net of past and future corrections it is now almost established that the work will never be satisfactory on eighth generation consoles; if, therefore, you were thinking of giving it a chance on your PS4, our advice is to grit your teeth for some time.

Different speech for the new generation consoles: if Series S comes out badly, because the title works properly but clearly sacrifices both the density of vehicles and inhabitants and the quality of the textures, Xbox Series X and PlayStation 5 are able to set up a convincing performance, which, however, still remains far from that recorded on PC. Patch 1.5 has made major changes to the “next-gen” versions making them even more enjoyable, while sacrificing the native 4K resolution, 60Fps and some pieces of technical performance along the way.

On the content front, Night City has welcomed with open arms a long series of features that one would wonder how it was possible not to make available from the launch, such as the ability to customize V’s clothing, or to buy various apartments around. for the metropolis, not to mention the reactions of crowds on street corners, the ability to change the appearance of the character and the marked improvements to the routines of the AI ​​that govern the opponents.

Of course, a lot of features are still missing from the appeal, from those already announced during the Night City Wire, such as the complete revamp of the functioning of the police and hand-to-hand combat, to those only suggested by past information, such as the ” activation of public transport, the possibility of using flying vehicles or greater incisiveness of the gangs in the general economy of experience. Nevertheless… 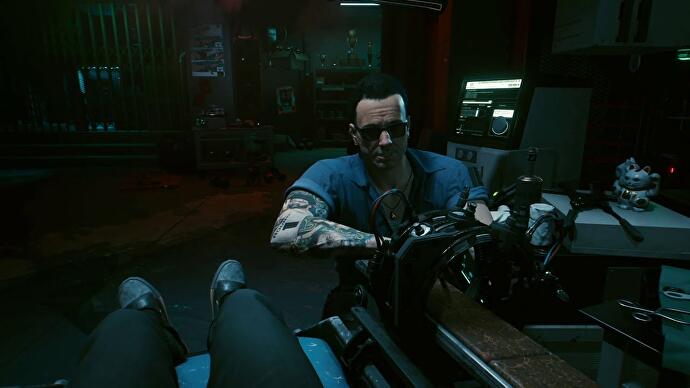 Gameplay and customization have improved a lot, but a lot is still missing.

Yet wandering through Night City listening to the notes of songs that have taken on a completely different meaning thanks to Edgerunners, savoring a progression system that divinely conveys the idea of ​​a V that grows and becomes stronger, is today a fulfilling experience. and centered. Yes, it’s true, it still happens to conclude the secondary assignment of a fixer and wonder what could have been a Cyberpunk up to its boundless ambition, but it is undeniable that the last two years have taught us how rare it is, net of all the defects of the case, to encounter titles such as 2077 on the way.

Of productions that have the audacity to place the player in front of a narrative crossroads, unfolding in front of him wide opposing paths that lead into the arms of fascinating figures such as Goro Takemura, Evelyn Parker or Rogue Amendiares, there are very few, and they often dwell in the recesses of memory. Which, if possible, makes the fate towards which publisher CD Projekt led the work at launch even sadder.

With a Night City that is both grown and incomplete, Cyberpunk 2077 will soon raise the curtain on Phantom Liberty, the first and only major expansion to appear in this universe, probably accompanied by what will be the definitive patches. If RED in the past have accustomed us very well with additional content, and especially with Blood & Wine, the eyes of the community are already on the “Orion” project: the very fact that the developers have already indicated a sequel to Cyberpunk 2077 is a concrete testimony of the hunger for revenge that pervades the studio. 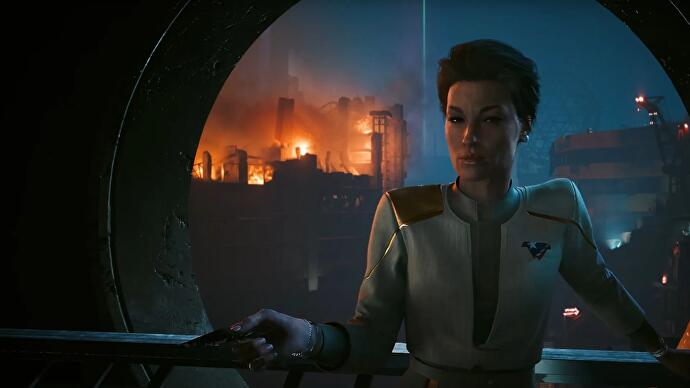 It is now official that Phantom Liberty will be the only expansion of Cyberpunk 2077.

Perhaps the time was not ripe to turn the spotlight on an RPG set in an open world that was capable of retaining all the care for the sequences and the technical quality usually typical of linear experiences. And we must take into consideration the possibility that perhaps they never will be, that it will never be possible to intertwine these natures in eternal conflict. But the Night City lived by Johnny Silverhand and V, together with that protagonist of Edgerunners, are nothing more than starting points from which an extraordinary legend could arise.

For the moment our advice – if you have recent hardware – is to mount a Kuzanagi Yaiba and whiz through the streets of Night City, discovering what really lies behind the veil of criticism and praise that have concealed in equal measure. the true nature of Cyberpunk 2077 so far.

A title that, yes, probably not an absolute masterpiece, but it is no longer the demon that has been painted for months on a canvas tainted by anger. After all, there is no real happy ending in Night City, especially for people like V and Silverhand: wrong city, wrong people.

Google aims to teach Gen Z to use the internet better

Deathverse: Let It Die – Of course I knew that one shouldn't praise the game before downloading it...