Village Romance On The Nintendo Switch: I’ve Ignored This Game For Far Too Long

Considering that it has already won a few prizes, including the German Computer Game Prize 2021, I have ignored Dorfromantik for far too long. But for me it’s in good company with many other games that I haven’t touched yet due to lack of time. However, the release of Dorfromantik for the Nintendo Switch was a good reason to change that. And I’m glad I did it.

When I’ve played it recently, Village Romance has helped me to switch off and immerse myself in an idyllic world. A world that I create on the one hand according to my ideas, but on the other hand also based on the tasks the game throws at me. Since the original launch in Early Access, the game has grown considerably, adding new content, modes and more.

In normal mode you have a stack of landscape tiles that you can place and rotate (if possible on the corresponding position) turn by turn. You group and combine forests, bodies of water and villages, which rewards you with points that increase your high score. There are also special tasks, you have to let a windmill border six grain fields and the like. If you fulfill these quests, you will receive more cards and thus make your world bigger and bigger bit by bit. Until your supply is exhausted. At least in normal mode. 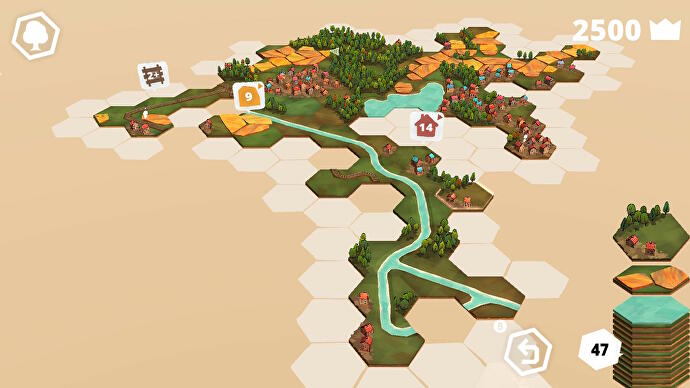 Your world grows card by card.

There is also a hard mode. A custom mode where you set your own rules. A monthly challenge mode. And the creative mode, in which you simply build without limits and restrictions. This creates idyllic landscapes reminiscent of a board game, which are accompanied by relaxed music and sound effects such as birdsong.

As I said, if you had stress during the day and don’t feel like shooting or competitive games, you can relax with village romance and isolate yourself a little from everything. Just switch off the notifications or the vibrations of the mobile phone and put it aside. That’s just a well-intentioned tip: I really feel better since I no longer read so many stupid comments on social media in the evening and during the day or click on certain hashtags that I know used to send me here and there to Doomscrolling tempted. Then rather a round of village romance, that definitely makes you happier! 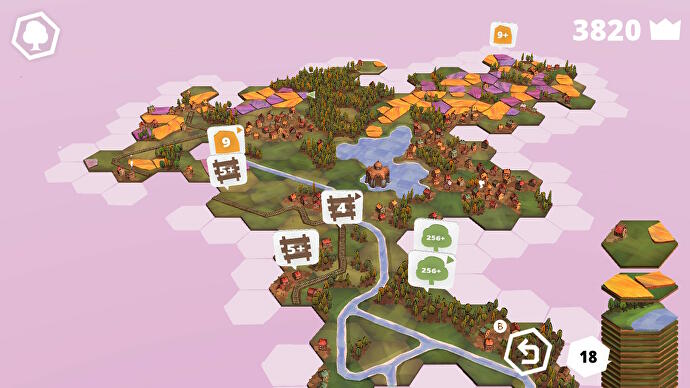 Complete tasks in normal mode to get new tiles.

The simplicity is also the claim here, especially with the challenges and high scores. If you want to get as far as possible in certain modes, you should definitely think twice about where to place your cards. The good thing is that village romance satisfies both sides. If you really just want to build a world in a relaxed way, the creative mode is exactly your thing. Even then, there’s a certain standard you set yourself by trying to build a nice looking world without it all looking too chaotic. But nobody has to get stressed, especially since there is now an undo function. And when things need to get a bit more competitive, the game delivers just as well.

In this sense: Sorry, dear developers, that it took me so long. But it was worth the long wait. If you’re looking for a relaxing game, I highly recommend Village Romance. You will not regret it.

Game Awards 2022: the complete list of nominees by category

Activision Blizzard and the Long Barrage of Sexual Harassment

Squeezie: how did the idea for the GP Explorer star event come to him?